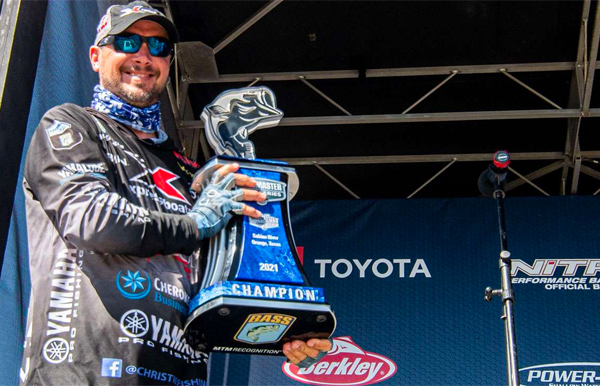 The Sabine is stingy. It might not even have bass in it – the jury’s still out on that deal. Okay it has bass but not a ton, not big ones and it’s hard to win there. Here’s how Jason did it:

> “I went way up the Sabine the 2nd day and fished the same kind of area I fished the last time [an Elite was there]. I had a few bites but they were really spread out: I’d fish an hour in a big area and get 1 bite, then 2 hours and get 1 bite. [After that] I kind of decided I was going back to Taylors [Bayou] or Neches….

> “For some reason I looked at Google [Earth] and thought I’d covered everything…[but] 1 more place up there…I thought I needed to get up there and check that. There was a big gap between the last fishable water I fished the 2nd day and where this was.

> “I spent the rest of the 3rd day making the run, making sure I had enough fuel. I took the 4th day of practice off. I knew where I was going, I was committed there and didn’t have time to fish anywhere else….”

> Day 1: “My expectations were just 10-12 lbs – 12 on the high side. I was really hoping that no one else had found that area. I didn’t see a single boat up there [in practice]. That doesn’t mean anything though. With 4 days of practice you can miss someone else easy.

> “I got there and was just going to start fishing…keep the trolling motor down. I got in about 100 yards and heard another boat coming and shut down. I immediately put it on high and got up there to my high-percentage area. I made 6 casts and caught 12 lbs.

> “Then I went around the corner where the person behind me couldn’t see me. I culled 2 and 5 minutes later I caught a 4.5. When I caught the 4.5 I hooked my spinnerbait up…just sat there and waited to see how long this other angler would take to fish his way to me. I waited about an hour and he didn’t get to me…saw him at the mouth….

> “The same thing happened the 2nd day…literally started on the 1st cast. I had 5 big bites the 2nd day…lost one of those big bites or it would’ve put me over 15 again. [He didn’t fish long.] I thought it was best not to burn the area…told the other angler, ‘I’m not going to catch any more than what I need to catch [because it’s] a 4-day event.

> “That day the water was starting to ease up [rise]. I didn’t know it would come way up. If I knew I would’ve stayed in there [day 2] and caught all I could.

> “I struggled. I lost a 3-lber right off the bat. I think I [caught] all spots…culled a largemouth at the boat ramp when I got back.

> “The 3rd night I was struggling with a decision on what do I do…decided I was going to stay. …looked at Google and thought, Man if I can go up that creek a long ways, it should get me away from that high water…. That’s what I decided to do…hoping the water would come back down.

> “When I got up there, the water was higher than it was on the 3rd day – 7.5-8’ high. I stopped and fished my 2 best stretches for 15 minutes and didn’t get a bite. …fired up and ran 3-4 miles up that ditch where the banks got higher and got away from that high water. It still wasn’t great fishing as far as big fish, but I guess it was enough to end up winning.”

His electronics were key…but not in the way you might think:

> “I would not have won that tournament without my Garmin being able to link with my Yamaha. The cable runs from the Yamaha to my NMEA network and gave me all that data from the engine – fuel flow, how much gas I had left….

> “I would not have been able to make that run on an old-style gauge because you just don’t know where the end is. …100 more rpms on average and I would have run out of gas.”

He fished 1 bait the whole time: 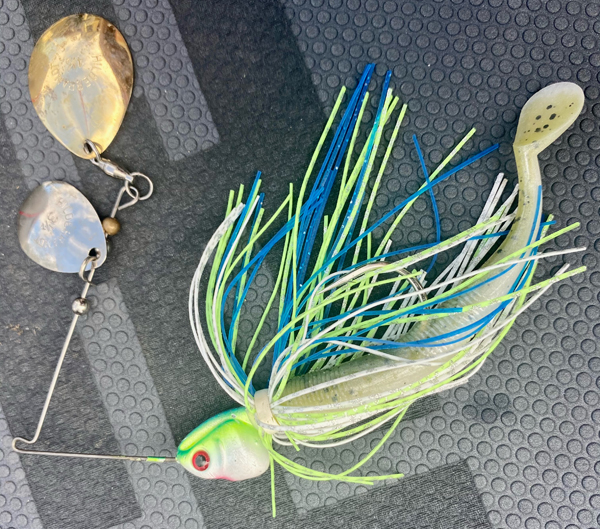 Said he reeled it steady with a little shake, and said he likes the Swim’m Dinger as a trailer because it has a good shad color. He shortened the trailer a bit for a smaller profile so spotted bass could get it and the largemouths weren’t real big anyhow.