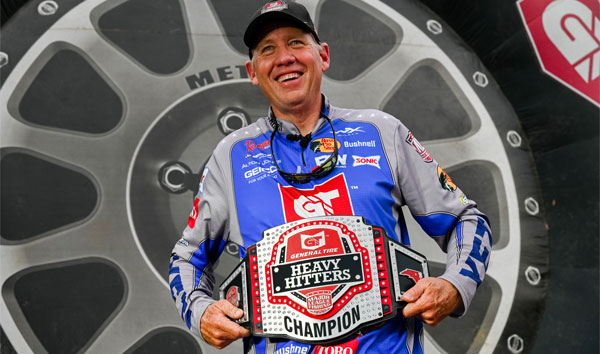 The last time Alton Sr won a tour-level event was in 2012…sight-fishing, which is how he won the MLF’s Heavy Hitters tourney in NC. He said, “It feels really good. I didn’t think I was done winning – it’s nice to see can still hang with some of the young guys. It feels great.” Here’s how he got his first MLF W.

Reminder that the tourney was on 3 lakes, and he fished 2: Falls Lake and then Shearon Harris.

> “I won the Knockout Round the last time we fished here on Falls, so I had a lot of confidence going in. But the fishing wasn’t as good on Falls this year…. I put together enough solid stuff where I thought I could survive.

> “I had a fantastic practice on Shearon Harris. I told Jimmye Sue that if I could survive Falls I thought I had a chance to do really well. I saw that the fish were doing things I really liked.”

> “I fished both ends of the lake. [One was] way upriver in super-shallow flooded bushes and grass, less than 1′ deep, dirty water. The second pattern was…down at the dam. The water was still stained and I couldn’t sight-fish, so instead of flipping I was throwing a wacky worm.

> “I think 2/3 of my weight came down by the dam. I was just looking for secondary points in main-lake pockets with wood on them. Laydowns were key. …grinding for 6-7 keepers a day but they were good ones – I caught a 6-05 and several 4-lbers.”

> “That MHF Kistler Z Bone is really key for accurately pitching lighter baits like that…enough backbone to set the hook and a soft-enough tip to make super pinpoint accurate casts.”

> Why a shorter rod: “…smaller bait. I was pitching it to extremely tight spots in bushes – between these limbs, over that one, around that one…. If you go with a traditional flipping stick, you won’t make that finesse flipping presentation in an accurate way.”

> Why that color in dirty water: “It’s a real dark gp – it probably almost looks black to the fish. It’s become one of my go-to colors. It works in clear, stained and dirty water.”

> Wacky Neko: Zoom Trick Worm (several colors including orange/flake, watermelon red/chart tail, gp/blue laminate). “If I didn’t get a bite on a really good target, I might switch colors the next pass. I couldn’t dial in to 1 color that was dominant.” #1 VMC Ike Weedless Neko Hook, O-ring, 3/32-oz nail weight.

> 7′ MH Kistler Z Bone Spinning Rod, 15-lb braid to a 9-lb Gamma Touch fluoro leader. “That Gamma 9 is actually a lot stronger than 8. If I’m throwing around cover and the water’s not too clear, I’ll go up from 8 to 9. You wouldn’t think it was a big deal, but when you’re finesse fishing around some cover it is a big deal.”

> “I didn’t have to wait on a lot of those fish to bite. I tried to land the bait where I thought fish were positioned on the laydown. If it hit the bottom and I didn’t have one, I reeled it in. That allowed me to be real efficient. [Running and gunning.] I was playing by the rule, He who makes the most casts wins. I was trying to make the most casts at the right targets.” 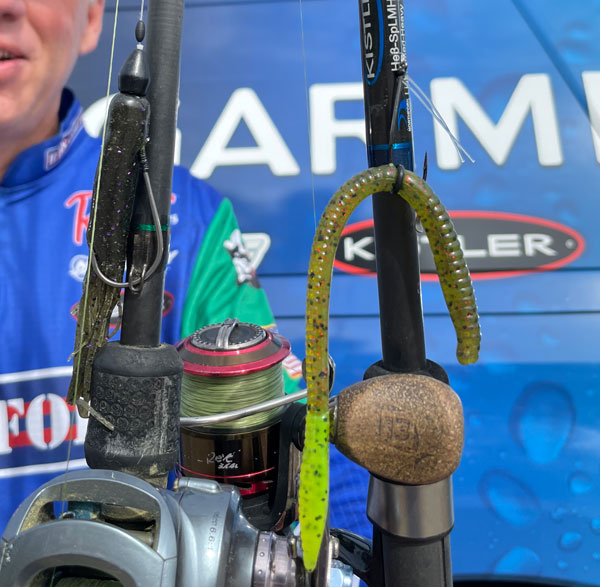 > “Last Thursday was the last day we were allowed to practice…5-day gap between the practice day and the first competition day which is an eternity during the spawn. The fish had just moved up in practice…better off making long casts with a wacky worm.

> “I did that the first day of the Knockout Round…best cove and I did not boat a single scoreable bass. I didn’t realize the fish had transitioned to the phase where you had to look at them to catch them. In the 2nd period the sun had come up, I could see the fish…switched from a wacky rig to the tube [moved to other areas and caught ’em]….

> “Yesterday in the finals I went back to the area where I started day 1 [and didn’t catch ’em on the wacky rig]. I had confidence the fish were still there, I just needed to be looking at them. We had a 30-minute ride-through, and even though it was dark I saw like 10 3-lbers in that one cove.

> “The blessing in me not catching them out of my starting spot the 1st day was it allowed me to accidentally save my best area for the finals. I had a fresh pocket to go to – fish that hadn’t been picked over.

> “I used the exact same tube setup. I never mixed in a different color.”

> “I have no lure sponsor this year – I get to fish whatever I want to now, whenever I want to fish it. Every 2 weeks I put out a little video – Alton Unfiltered – on my social media. Whether it’s in a tournament or fun-fishing at home, it’s exactly what I’m catching fish on.”

> “Jimmy Sue – she is my rock, the love of my life, and for 30 years she’s traveled with me to basically every tournament. She does so much behind the scenes while I’m fishing. That’s more than just a casual shout-out. Also all my sponsors – Ranger, Mercury, Kistler, Garmin, WileyX….

> “For this tournament and my season I want to give a shout-out to the Bass Force app. Even as a pro and one of the pros featured in the app, it’s really become a tool that allows me to dial in quickly. You put in the conditions for the day and it spits out specific lure results from the top pros in the world. It gives me a lot of confidence – either I’m thinking along the right track or it’s why is Aaron Martens or Jacob Wheeler thinking this. Sometimes I like to try those outliers.

> “The biggest shout-out is to my Lord and Savior Jesus Christ. It’s hard to get in the position to win, and it’s even harder to…beat those top 10 guys. I don’t pretend for a second this win is because I’m a great angler or whatever. I know completely and totally it’s God’s blessing on my life. I go out and give it my best effort, but I completely leave it in His hands.

> “…no matter what you do for a living, don’t let the circumstances of your day or success of this week or that week affect how you feel. God has been teaching me over the years that my identity is in Christ. That’s why I can still be in a good mood when I [finish last at] Redcrest, and I can’t get a big ego if I win. A pro bass fisherman is what I am but not who I am.”