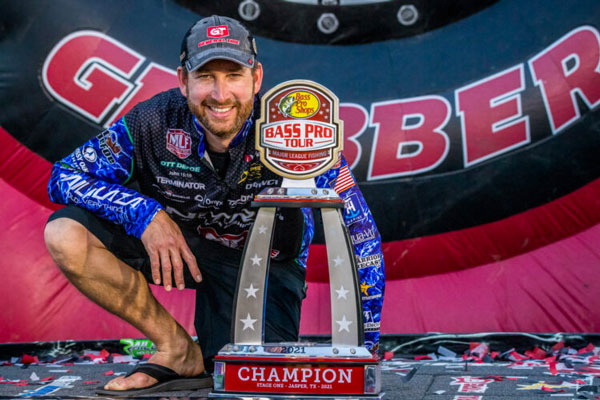 Rayburn had been fished hard by the time the Bass Pro Tour guys got there. And it was still being fished hard during their practice – because it’s Rayburn! Tons of fish, tons of boats, but someone would figure ’em out and win. That dude was Ott DeFoe, who won his 2nd TX BPT in March for the 2nd year in a row. Here’s what went down.

> “My thought process before I even left the house was I looked at the weather and they had at last a week of real warm weather, like 70s and 80s, and no colder than in the 50s. So I looked at it as if some of the fish had probably finished spawning, but some fish hadn’t spawned yet. So the way my mind was working, we weren’t catching the first wave.

> “Sam Rayburn in March…tons of fishing pressure. We get down there and find out there’s a 500-boat high school tournament the Saturday we were practicing plus local team tournaments, maybe 300-400 boats’ worth of those over the weekend – so fishing pressure obviously was going to affect the fishery as a whole. Knowing those factors, I immediately pushed to look at the north end.

> “All the community hole stuff is mid-lake and down, so I thought the north end probably wouldn’t get as much attention. Typically it doesn’t because those fish largely will not win a 5-fish tournament. …not a lot of giant fish up that way generally speaking. I’d never fished up there in my life.

> “In practice I had 1 key spot [for post-spawners] and 1 kind of a secondary deal working: a swim-jig and a frog on fish that were probably still spawning.”

> “I ran that the first day of the tournament and it worked pretty good. My second deal with the swim-jig and frog I had a fair number of bites, but a lot less scoreable fish than I expected. My first 2 bites in practice were a 4.5 and 2.5, then I cut the hook off. Either they were different fish in the tournament or I was misled.

> “I did that [frog and swim-jig] less than the 2nd day and none on championship day.

> “My key [post-spawn] spot was in a back-channel of the river – just a cut that didn’t have water coming through it…had a little bit of grass in the back of it. But more than anything it was just a void.

> “So many trees were up there…not buck bushes or willow trees. Some type of tree that grew up when there was a drought or something – acres of them. Most of them were from no water to about 2′. This [spot] was just a void in those trees in…1.5-3′ water.

> “I think the fish just liked that open area [mud bottom], and they also liked to be in that ideal depth range. I think it was an exit route for fish post-spawn. …ton of bait – a lot of shad there but you wouldn’t see them balled up…fish would come up on the surface chasing bait and stuff.

> “I rotated through a number of different baits – a squarebill, a DT4, a bladed jig… The DT4 was the penguin color, the squarebill close to penguin – it was hand-painted. The squarebill will be in the [Rapala] OG line but a few years down the road. The bladed jig was 3/8-oz chart/white with a Bass Pro Super Shad trailer (white ice).

> “I also caught a couple on a bone-colored walking bait, and something that’s a really good cleanup deal – a Bass Pro Wacky Stick-O (black/blue) on a #1 VMC Weedless Neko Hook.

> “My plan B deal [swim-jig and frog] I was fishing in an area where the fish were still spawning…couple shallow places I could get into…[where the] trees were not overgrown…grass…flooded trees. Some of that was on an island…little islands…water was over them. Other areas were small pockets.

> “The the biggest deal with that bite was you had to get where it was shallow – where your trolling motor would stir up mud. 1.5-2′ of water was too deep. You had to get really shallow. That was more important than what cover you were fishing around or anything else.

> Just regular retrieves on both.

> “Day 4 I didn’t go back to those swim-jig areas…focused more on that one starting spot…found 2 other little key spots in current…points of islands. Once I milked that first spot, I went and ran those other spots and looked for more stuff like that stuff too.”

> He used the crankbaits and wacky worm “…retrieved with the current and cross-current.” He drifted the worm – Bass Pro Magnum Fin-Eke Worm (purple brown) – rigged both wacky weightless and TX-rigged with a 3/0 VMC Heavy Duty Worm Hook and a 3/16-oz weight. 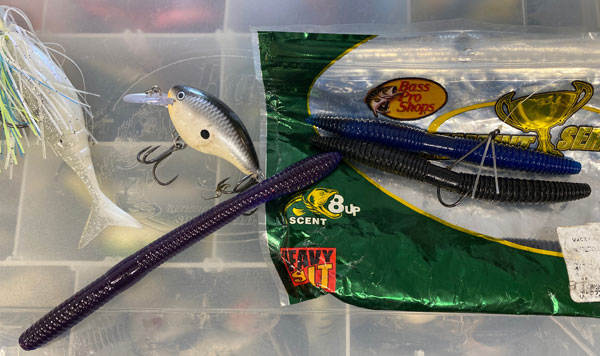 > That looks like too-heavy action for those baits, but Ott said they’re not as heavy as they’re rated.

> Electronics: “…wasn’t a major focus in this one except for the mapping.” And also Spot-Lock.

> “It definitely was a fun week. TX has been really good to me. March has been a really great month for me – 2 Bass Pro Tour wins and a Classic win in 3 years in the month of March. As good as that is, what we have coming up – Easter and what we celebrate there with Christ’s resurrection…I love this time of year.”