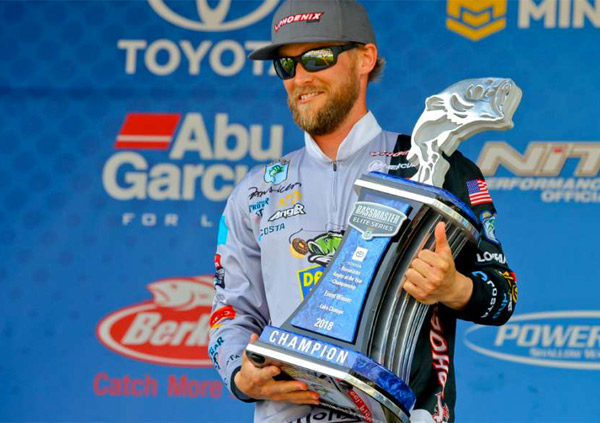 > “My confidence level was not very good at all. I drove to GA pretty scared. I didn’t know anything about Chatuge, haven’t fished that part of the country much or a lake like that up in the mountains…not really a blueback herring fisherman. I’ve only fished 2-3 lakes where blueback were dominant.”

Aaaaaand he won anyhow — here’s how he did it:

> “Late summer/early fall, typically the fish are following bait around. I knew that’d probably be a big deal.

> “I made the decision to focus on spotted bass. I looked at past tournament results, and they were pretty dominated by spots. Since it’s a small lake and these guys are so good at fishing shallow, I knew it’d be really hard to win a 3-day event fishing shallow [for largemouths]….

> “So I pushed all into that and fished offshore…[but] I never try to take anything out of play. I did try shallow for 1 hr of practice a day, went up there and looked around…. But I was pretty certain…focused in on catching spotted bass.”

> “The 1st day fish were busting everywhere, chasing herring. Right then and there I knew that was the deal — that’s what they’re doing, what they want to eat.

> “The lake was low, so that would make the offshore stuff even better, especially on a sunny day. I idled and graphed all the good places — looked for good shallow points, rock fields, ledges or anything like that. I tried to find as many schools of fish as I could, marked as much brush as I could. It was a small-enough lake, I felt like I got most of that covered.

> “I didn’t have a fantastic practice, but I noticed that…the fish wouldn’t bite on anything presented to them straight down — like a dropshot or spoon — and wouldn’t bite anything dragged on the bottom [like a TX rig, jig or Carolina-rig]. For the most part, you had to get them to come and commit to something closer to the surface.

> “I felt like I saw the whole lake and knew probably how it was going to go down. I got a few clues as to where it seemed like the bigger fish were — a larger amount of 3-lb spotted bass.

> “The biggest thing for me…noticed it was a big timing deal…knew had to set my day to be in the right place at the right time. It was pretty evident that the topwater bite was better in the afternoon, when it was slick clam. In the morning, barely subsurface was better. I felt like I could catch them the whole day instead of just the morning or afternoon.”

> “3 of the areas were narrows in the lake…either because boats were driving by a lot, scaring [the herring] closer to the bank, or because [it was a natural pinch point]. The bass knew that and adapted to that movement of the herring.

> “One place was 1/4-mile across, another was smaller [than that], and the other place was 200 yards across. You needed to fish the structure adjacent to that, like the points…. What was going on was the fish had a little home on that point or brushpile or whatever, and would tend to be within 50 yards of it.

> “Sometimes they’d pin the herring against the bank…. As long as you understood what the homebase was [for the bass], it made sense.” 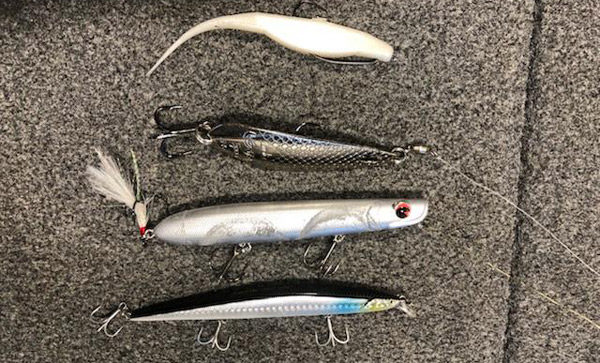 > Molix Jugulo Jerk jerkbait (mx holo shad — black black/blue chrome). “It stays really high in the water column and you can rip it real fast. You had to work it fast to get one to bite it.” 12-lb Seaguar InvizX fluoro, 6′ 9″ M McCain Jerk/Rattle/Spin Rod, Shimano Metanium MGL (7.4). “I was only pausing to crank up slack. I was really working it hard and aggressive.”

> Ima Little Stik (chrome), 50-lb Seaguar Smackdown braid (dark green) to 20-lb Seaguar Rippin Mono, same rod as the Fluke, same reel (7.4). “I was walking the dog, trying to throw it on busting fish. If that didn’t work, I’d throw it over them, over brushpiles to draw the fish out of the brush, stuff like that.”

> “In the morning I’d do a 1-2 punch…something under the surface…Fluke, jerkbait and spoon, but mostly the Fluke and jerkbait.

> “Afternoons…topwater fishing got good — hot, slick and sunny. You almost had to throw a topwater to get them to come up and commit to eating something.

> The guys fished for 2 days, were off for 1, then fished day 3: “…a small lake and the boat traffic got really bad Friday and Sunday. It was really hard to get them to bite a topwater…millions of boats, you’d never know when a boat wake would come. When it finally got still, you’d probably get a bite. That’s something I hadn’t noticed before — I’d never fished for 6 days in a row with a topwater in my hand….”

> “The first 2 days I caught them good in 2-3 different spots. Then we had an off day [Saturday] — I think they had a local tourney that day…couldn’t catch them on the same places [Sunday]. I’m not sure, it might have been that. I had to catch them on different places.

> “My boat [Phoenix 921] is my most critical piece of equipment. It’s such a comfortable tournament boat. It keeps fish alive, rides well, everything about it is great.”

How Josh Bertrand won the St Lawrence Bassmaster Elite
How Jordan Lee won the first BPT
To Top
We use cookies to ensure that we give you the best experience on our website. If you continue to use this site we will assume that you are happy with it. Cookie settingsACCEPT
Privacy & Cookies Policy