First of all, Major League Fishing’s Bass Pro Tour is a way different format than guys have been used to. Shorter practice, weights get zeroed twice if you make it to the final day, different lake on the final day. So…was practice different? Jordan said:

> “I didn’t really approach it differently. The start of practice was miserable as far as weather. It was cold, raining — not the conditions you really want for FL. There just wasn’t a lot of time to break down the Kissimmee Chain….

> “I was just trying to find areas I could get bit. I knew it wasn’t going to be an absolute slugfest. Just making the top 20 cut was all I needed to do for 2 days. I knew I’d have to catch ’em, but I knew I wasn’t going to have to kill ’em.

> “…a little bit experience [in FL] so I knew that areas with hydrilla and clean water were what I needed to look for. Areas with multiple bites where I could just sit and fish. The last thing I wanted to do in that tournament was have 10 different areas and run around. Down there that’s not how you do well.”

> “I really just refined it as the week went on, and found a few new areas that kind of helped me.

> “I used 2 baits. My main bait was a vibrating jig with a gold blade — gp with a little chartreuse. Something about that color was money…the gold blade was the ticket for sure….was definitely getting more bites. I was using a few different minnow-style trailers, 3.5″ and 4” [gp].

> “I was burning that with a 7.3:1 Revo STX and 7′ 3″ MH Abu Fantasista Premier Rod with 17-lb 100% Fluorocarbon. I was reeling it pretty fast, burning it over the grass, getting that reaction strike. I couldn’t catch those fish slowing down [flipping]. That’s a little bit opposite from FL because it was a cold front — it was a warming trend, but it was pretty cold the first part of the tournament.

> “…fishing scattered hydrilla…better fish were in hydrilla mixed with dollar pads. When I got around that, I made that comeback the 2nd day. You have to have that hydrilla where the water’s cleaned up. That’s where the better fish are.

> “My other bait was a Berkley MaxScent General (black/blue) on a light sinker (3/16-oz tungsten) and a 4/0 Berkley Fusion19 Hook [Heavy Cover]. I was flipping that around isolated pads. …7′ 6″ H Fantasista Premier and a Revo Rocket with 50-lb Berkley X9 green braid. 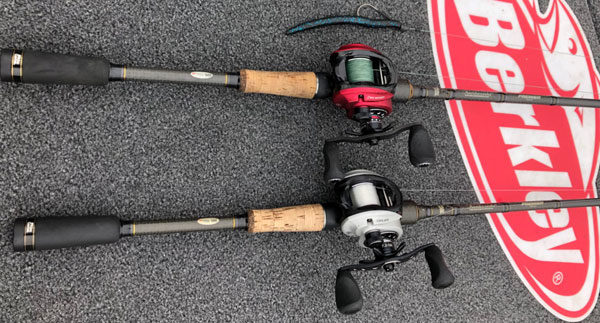 > “The other key factor on Kissimmee and on Garcia was wind. The mid-morning periods were really slow — I struggled to get bit when it was slick calm. But when the wind picked up….

> “I literally went through an area the 3rd day, on Kissimmee, when I was on the [cut] bubble…one area had the dollar pads mix. I fished it for a few hours mid-morning without catching a single fish, but right at the end of the day the wind started blowing. I was debating on going back…got back with 30 minutes left, and within 10 minutes I caught a 4-lber, my biggest of the day, then caught another one. That told me the wind was really important….

> “On Garcia [where they fished the last day], clear water with hydrilla was the key. A lot of the lake was off-color and dirtier. I just fished my way around and noticed one area was noticeably cleaner. It had a good clean hard bottom, and scattered hydrilla with clean water…a good ripple. That was really the area that did it for me. The fish were spawning or pulling in to spawn.”

> Why he tends to come on strong — “Guess I’m a slow learner. [laughs] It takes me a while to figure something out. When I’m at my best is when I can dial in an area and really pick it apart. A spot, an area. When I win tournaments, I’m in an area with a group of fish and just pick it apart. That’s when I feel comfortable….”

> What about zeroing weights: “For me it was good — I barely got in [the cut]. But overall what it does is there’s no relaxing. [In a 5 best tourney] when you have a 10-lb lead and you’re probably going to win the tournament [you can relax a little]. Now it’s gonna zero, so you have to catch them just as good or better. You really have to bring it every day. Not that you didn’t before, just you don’t ever have a lead.”

> What about the flip side: “Yeah it definitely has a flip side. When you’re leading the event, you’re catching them really good and it gets tough, obviously you want to be total weight. With me barely sneaking in…obviously I’ll like it. It’s different. As far as TV goes…having that drama every day…to beat a group of anglers to move on, adds a little bit extra to the competitive side of it. …makes it exciting to watch knowing that nobody’s safe really.”

How James Elam won the Bassmaster AOY tourney on Chatuge
How Rick Clunn won (again!) at the St Johns
To Top
We use cookies to ensure that we give you the best experience on our website. If you continue to use this site we will assume that you are happy with it. Cookie settingsACCEPT
Privacy & Cookies Policy