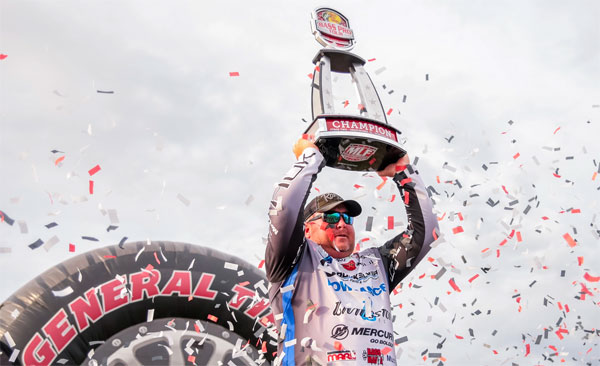 Guess what he DIDN’T do was anything special other than maybe read the weather well and execute well. But sometimes it’s that simple, even in a field full o’ hammers over a loooong tourney format (the tournament actually started in January — kidding). So here’s what went down:

> “Previously [at Okeechobee tourneys] I’d come in in the top 10 in some EverStarts and the FLW Series. It’s usually hit or miss for me — either really really good or not good…. That’s just FL in general: If you don’t get a couple big bites, it sucks.

> “But with this [MLF] format, you can fish the way you want to — I think it’s better for everybody…you were looking to catch 2 big bites. That would make or break your whole day…but now a 2-lber is a good one.

> “I used to get beat by guys who flipped all day for 9 bites. Now [with the MLF format] you get a chance to catch 50 and hopefully a bunch are 2 lbs or better.”

> “I found some fish that were on the beds in a place up north…some over at Bird Island and some right where I ended up fishing the tournament.

> “We had a really strong north wind. The first day of the tournament I didn’t get to fish [he was in a different bracket]. Well, Okeechobee is difficult when the wind blows strong out of one direction…makes that north end get shallower. The fish were only in like a foot of water. If [the water] drops 4-5” on them, it makes them really spooky.

> “[In practice] I’d been to Pelican Bay, South Bay…got some bites. I knew I could go down there and fish a little bit so that’s where I went” on his first day.”

His next fishing day, he went up north:

He saw enough there to stay there cuz he was back there on his 3rd fishing day:

> “…Knockout Round at the end of the 3rd day, I was swimming a Speed Worm and caught 21 lbs in the 3rd [fishing] period.”

So he fished the same spot the last day/Championship Round:

> “Later in the day those big ones come out and play — they come out from underneath those mats. …the warmest part of the day is when those fish bite and 2:30 was as warm as it was going to get. That’s when the flurry hit every day.”

How he fished in the north

> “I was just reeling that worm, swimming that worm. Just throw it out and wind it in — wasn’t very hard. …holes in the eelgrass where fish were spawning. 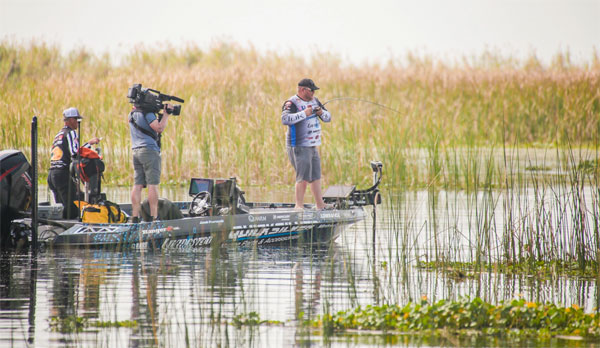 > “…not on the bottom, swimming it up towards the top. Winding it up over the top of their heads –they see it and I guess feel like they have to come get it.

> “Bass were on just about every bed. Some were a whole lot spookier than others. I tried to sight-fish some of them, but they weren’t having it. …the water was clear…long casts were key.”

> “That’s the way everything kind of played out…a 1-rod deal.” 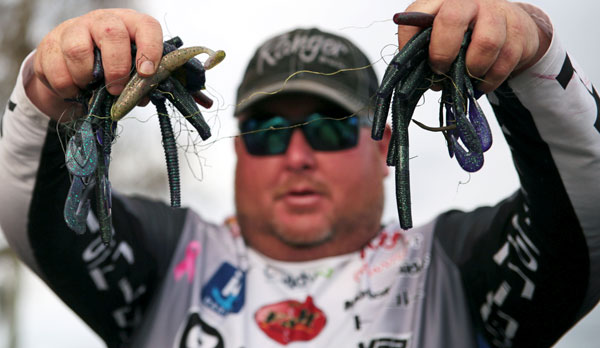 How he fished down south

> “I was flipping a 1/2-oz V&M Heavy Cover Flipping Jig (b/b) with a V&M Wild Craw on the back. …reed heads…inside of them, points, pockets — everything you could get a bait into.”

> “It’s just a dream come true man — to compete with these guys day in and day out, it’s a dream I had when I was a kid and to be living it is another thing. Yesterday KVD called me on my phone and said, ‘I just want to say congrats.’ I compete against him and he’s great guy and friend, but when that guy calls you, man it means something special.”