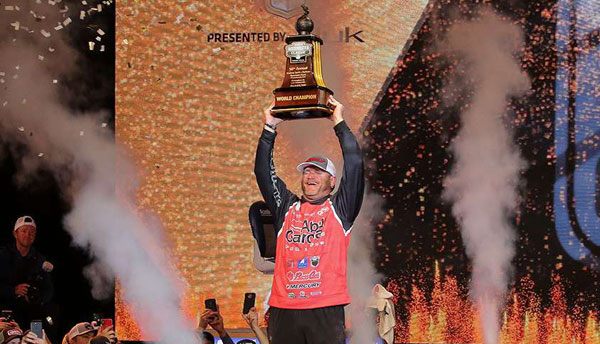 Not even Hank Cherry knew the 50th Bassmaster Classic was over after day 1, when he sacked a huge 29-03 on a tough weather day to lead it by almost 8 lbs. But it was a done deal: Hank led the next day too, then won it by about 6.5 big lbs. Here’s how he did it.

> My gameplan going in was secondary points right before spawning flats. I came up with that going on previous tournaments I’ve seen won there, a little history and watching the weather patterns.

> [The weather and water levels were unstable and he figured most fish] were not going back [into spawning areas] til the water stayed stable. It had been way up, and was going way down.

> I thought the biggest key was the grass had to be something different — because there was more grass than ever…on Guntersville. I found high spots in the grass void of grass, and found spots with 6-8′ of water leading to 4 — 4′ was eelgrass but 6-8′ was hydrilla. So the eelgrass was like a wall….

> The place where George Cochran caught them all those years ago [not sure if this was George’s ’04 or ’92 win on Gville] I planned on fishing in practice. I fired a red jerkbait up there [red to get a reaction, he said] and on my 1st cast I caught one, then the 2nd cast I caught one.

> I had odds and ends — places like that…where the grass had to be short, but it could have thick grass around it. That way the fish didn’t have to come through 3′ of grass to get it. Being as cold as it was, I didn’t think the best point of attack would be to draw them through the grass….

On whether he thought the jerkbait would figure in the tourney:

> I thought if the water cleared substantially, I knew I’d catch some. It’s just that time of the year. I knew the bait would have a chance to shine. And I thought that by Sunday, because of weather trends, the jig on docks would be another way to shine. Turns out in hindsight both were pretty effective throughout that whole tournament. 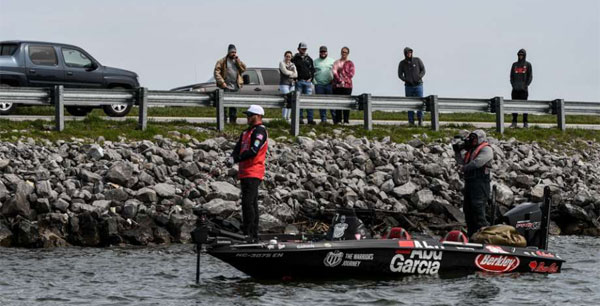 > The wind’s blowing hard so I make the decision to go fish the front side of the causeway. [How he found that spot:] On the official day of practice, my trolling motor panel…had a little short so I went in and got it fixed. I got back in the water, put my trolling motor down and said, Let me run up to these rocks real real fast to make sure it’s fixed. My 5th cast I caught a 5-lber. I looked around and…not a competitor in sight. …started graphing, looked at the weather again…[spot] planned on starting got crushed by the wind.

> I wanted to fish the front side [of the causeway on day 1] but the grass had already pushed into the rocks. So I went to the back side. I could see on LiveScope the shad were suspended in 18-20′ and about 10′ down. I was confused because at home in the morning they’re [shallow] on the rocks so you’re cranking, then they pull out and you fish the jerkbait.

> I ran up and down those rocks on that side, probably a little faster than I should’ve.

> I had a place back in Browns. [In practice] I was throwing a ‘Trap [there] and kept bringing back 4″ threads of bright green hydrilla — not dead, not going dormant. [In practice] I caught 1 there and had 1 other bite I thought was a big fish.

> So I proceeded to run over there…hit reset in my mind…Poled down with the wind on my back and concentrated on my casts…knew where I needed to be throwing.

He caught one and missed one:

> …couldn’t believe I missed it. I threw back in the same direction — it actually landed a little short — and as soon as I clicked over, my rod was going down. That was my first 5- or 6-lber. 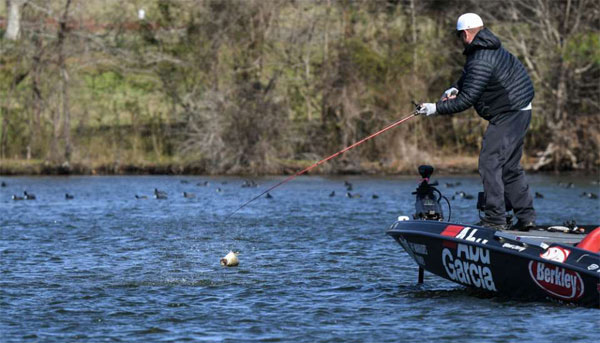 He caught another one for 3 fish total:

> I was working my way out and noticed a limb sticking out of the water maybe 6″. I panned over it with LivesScope but couldn’t pick it up because it was too shallow. I threw [a Jack Hammer] to the right side of the limb and caught a 7-lber. Then I threw to the left side and caught a 6-lber.

> The first thing that came to mind was, I have to get out of here because as soon as that hits BASSTrakk the [spectator] boats are coming. I went to a place [that was] blown out and sure enough, here they come.

Later that day he ran out to the causeway:

> …alternating with a jerkbait and crankbait. About halfway down it, the causeway has little sections that stick up higher [rock piled up under the water]. On one I saw a big blob sitting up top of it. [On LiveScope] I’m watching my crankbait, watching it come through there, watching it deflect off…soon as it did [the fish smashed it] and that was my other 7-lber.

> I kept going down that stretch and caught a 4.5 on the jerkbait. That was pretty much the day.

He caught a limit on the Jack Hammer, culled one with a crankbait and culled again with the jerkbait:

> I went to the Jack Hammer [on the flat] because the wind was blowing so hard there was a huge bow in my line [when fishing a ‘Trap] and I couldn’t tell when I was making contact. I could creep the Jack Hammer…keep it vibrating and keep it on the bottom.

> I headed straight back to that flat thinking I was getting ready to erupt them again. No bites. I ran back out to the causeway and caught one here and there on the jerkbait.

> Then I scrounged around, fished a few docks, culled once with a jig, then culled off another dock with the Jack Hammer. Then I caught the best one back off the causeway with the jerkbait.

> I lost one about 7 lbs with 30 mins to go…. For a second I almost lost it, but regained my composure and kept fishing.

> I started in front of the causeway and thought it’d be easy. 2 hours into it I hadn’t had a bite.

He went to the grass but it didn’t produce, so he went back to the jerkbait at the causeway:

> …the weather was right — slight breeze, high skies. I was picking it apart, looking at LiveScope…saw fish and saw bait. What gave me the confidence to do it was that morning I didn’t catch a bass [at the causeway] but I did snag a big gizzard shad. And sometimes 4-5 gizzards would follow the bait back. So I knew some time of day they’d fire up, I just had to be there at the right time.

> …switched sides…caught 1 and 5 casts later I lost a big one. I just kept fishing. …went about another 100 yards, and for some reason I had a feeling I needed to be on the other side.

He switched to the other side of the causeway and:

> I almost lost all my function at that time. I couldn’t feel my fingers, my reel, my rod — I was singing songs in my head to calm down. I finally regained my composure and got back at it.

> I caught a few smaller ones, then went back to the other side where I thought one swiped at it. The wind kicked up a little more, and I knew it’d be time to catch a big one. I saw lots of bait on the LiveScope and fish suspended here and there. I got back to the waypoint and caught that fish, my other big one. The was the last one off the causeway. 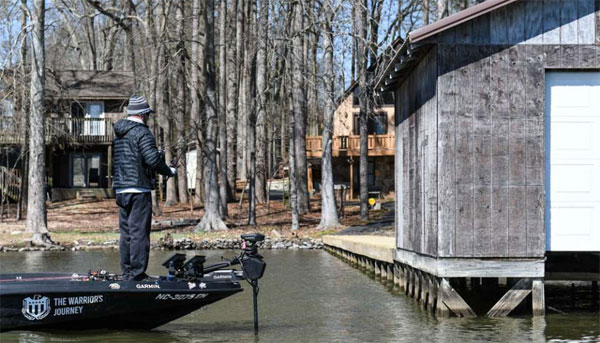 Hank left his boat in AL so gotta have placeholder bait pics for now: 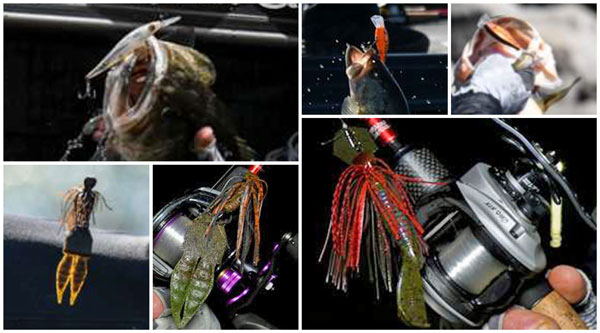 > The key to that bait was changing the hooks to #5 medium-shank EWG Berkley Fusion19 hooks because it added the extra weight I wanted — so when you stopped jerking, the bait was sinking. Not like a rock. 95% of my bites was when it was sinking.

> I just had a feeling [the bait should sink from] the way the fish were acting and from fishing bridges at home. …think they see it fall by them, then when I rip it it brings it back up to where it came from. When I got those first bites and saw how good they were getting the bait, I just stuck with it.

> The 110+1 has a longer lip on it so it goes a little deeper [to] target the area where I kept seeing most fish suspended. Throughout the day they might have gotten a little higher [in the water column], but I don’t think I got one shallower than 6′ and no deeper than 10′.

Said he only had 1-2 keeper fish on the crank.

> Docks: “Even though the water [on day 3] was semi-steady and slightly falling, [the fish] were still on the first set of poles…dirt shallow in the shade.”

> I think this was about the flat: “Any time there was an irregularity in that grass, that’s where the bite was coming….”

> LiveScope: “It just let me see what was in front of me and how everything was setting up, how the rock was laying…. On fish that I saw, it let me know how they were reacting to my bait. It let me keep track of the shad. Every time…saw them 8-10′ off the rocks, I was on point because I knew I was about to get a bite.”

> Power-Poles: “The first day they saved me. They locked me down in place and allowed me to walk around the boat and make multiple casts at targets. I can’t imagine fishing in that wind without them.”

How Jacob Powroznik won the Okeechobee BPT
ALL the baits of the Guntersville 50th Bassmaster Classic!