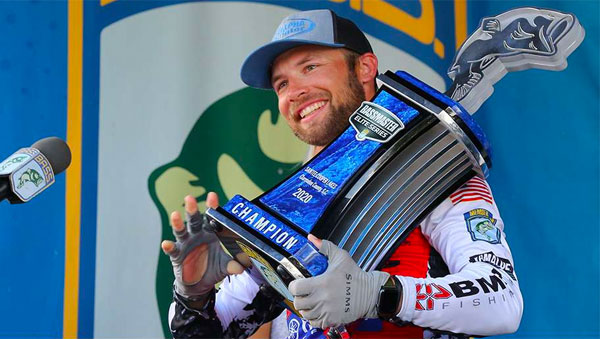 Need you to understand that Brandon Palaniuk was leading this deal after 2 days, then came in on day 3 with LESS THAN 10 LBS (9-09), then went out day 4 and caught what I think was the 2nd-biggest bag of the tourney (22-11) to WIN BY 8 LBS — on a day 4 when almost half the top 10 guys (who’d been catching ’em all week duh) didn’t even weigh a dang limit! Here’s how he rolled in this’n:

> “My biggest thing was to not get super spread-out in practice. I was very cautious about that…such a big body of water, so much fishable water. I took the time to do a bunch of research online…to look at the areas of the lake that continually came up in past tourney results no matter what time of year. That way I basically knew a population of fish lived in that area.

> “…coming into it I didn’t know anything about the lake. So I needed to be able to split my 3 days of practice and put myself in areas where I knew a population of fish lived so I could see how those places set up…how fish were using those places that week. …an idea of what stage the fish were in and what they were doing. Then I could narrow it down to the area I felt the most comfortable in.”

> “My practice wasn’t that good. After practice I was just hoping to be able to scrape enough together to make a check and get some good points out of it. In looking back…was a blessing in disguise. I wasn’t dialed into anything necessarily, but I had just enough little clues here and there that allowed me to make those decisions and those adjustments…ultimately what allowed me to win.

> “…figure out how to get 1 big bite and then fill out a limit. I figured that 1 big bite was a difference-maker for guys cutting checks…. The guy who’d win would get 2-3 of those in a day vs just getting 1.

> “It wasn’t easy to get bites — that’s why I started on that place…not a place where I’d catch a bunch, but I thought I might catch one 6-7 lber in the morning and then go punch mats and fish some of the flats up north to maybe fill out a limit and get 1 more big bite.”

> “…caught a 1.5 and put it in the box, didn’t have another bite [at his first spot]. I decided to run up north, got up there at 9:30-ish and stopped on the first stretch where I’d caught 1 big one punching [his only big fish in practice]…caught a 7.5. That allowed me to slow down a lot. I felt like that was my 1 big bite I needed.

> “I probably went another 10 minutes…another keeper punching. Then I went to a spot…1st day of practice right at the end of the day I saw a group of fish come up schooling. I never caught one of them, but I knew that group of fish were there. I’d marked a few isolated stumps, isolated rockpiles and little drops in that area. I felt like maybe could take it apart and get a couple bites.

> “…caught a double [on a jerkbait] — a 4 and 2 on the same cast, then I caught a 6. My mindset completely changed from, I just want to survive this event, to I want to win this event. I got caught up in the moment…swapped out the trebles [that had gotten mangled] and started fishing again.

> “I go and punch another stretch of mats — 20-30 minutes — then idled to another place, opened up the livewell again and realized I had 3 floats on one side where there should only be 2. I knew I had 3 big ones on the other side so there shouldn’t be 3 floats on [the other] side.

> “Lo and behold I have 6 of them in there. So I called Trip…2-lb penalty and instantly thought that might have just cost me the entire event. I never caught any more the rest of the day.”

> “I decided to start up north and spend as much time there as I could because that’s where most of my fish came from. They changed. They weren’t really biting the jerkbait at all. I end up [fishing] a [XZone] Mega Swammer…slow-roll that swimbait through them…ended up catching a 3.25.

> “I went to punch mats I hadn’t had a bite in but close to that area…. I caught a 4-lber — it was the last bite I ever got in those mats and I fished it multiple times a day.

He caught 1 more keeper to fiull out his limit of 18+.

> “I started up north [again]…throwing a swimbait. The first bite I get is a 4-5 lber — halfway to the boat he jumps off. I got bit on 6 consecutive casts and landed 3 of them, but they were all little 14-15 inchers.

> “Then I went punching. I ran into Carl [Jocumsen] and as I’m passing Carl I just randomly flip my punch rig to a cypress tree and catch a 2-lber. That’s the only fish I caught on a cypress tree all week. …caught 1 more keeper on the Mega Swammer.

> “I felt like my odds were just as good to catch 30 lbs as they were to catch 3 lbs. It was just a matter of making the 5 right casts and crazy things could happen.”

> “[He got there but] the water was dirty so I figured they probably wouldn’t eat a topwater. I picked up a Chatterbait — I had not caught a bass on it [all week] — and caught 2 good ones [a 4 and a 3]. Then I randomly found a brushpile…saw a fish blow up and I was driving to try to go catch the fish that blew up and saw the brushpile on the Mega 360. I chased [that fish] down and caught a 7-12 [dropshotting]. 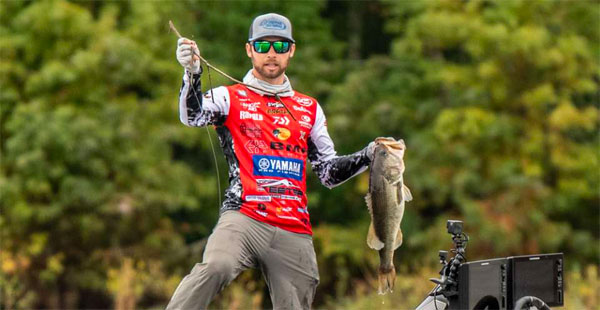 > “I ended up spending way more time down there than I planned because I felt like there was a lot of activity…saw fish on my graph…was seeing things happening. Once I had those 3 fish, I knew I was 2 bites away from having a legit chance at winning.

> “I felt like the odds of getting a bite were better up north.

> “I fished my little magic stretch and didn’t get a bite. I punched the mats…didn’t get a bite. Okay I had to change something up. I had 1 little section of mats marked but I hadn’t fished it in the tournament…ended up punching up a 3.25. That gave me 4. I thought, Just give me 1 more keeper bite and I’ll have a shot.

> “I went to a brushpile I marked in practice up there…not fished int the entire tournament. Threw my dropshot in there and caught a 2.75. Then I went back to my little magic stretch of mats and ended up punching up a 4.25…culled out that 2.75 I just caught.”

> “The best mats seemed to be 1.5-3′ hyacinth mats with giant salvinia blown up against them.”

> “The lower end of the lake was the only place I found any submerged vegetation. There’s a pretty heavy vegetation management plan on that lake. I actually read nearly the entire document on the [veg] management plan for that lake, trying to figure out where the grass was and wasn’t.

> “…only about a 50-yard section of submerged grass. I could never figure out exactly what it was. It had that slime grass on it. If you were at a really healthy grass lake, there’d probably be no fish in it. But because it was the only submerged stuff within miles, I think it held some bait and some of those fish. It wasn’t far off the main lake so it allowed those bigger fish to move in and out pretty easily. 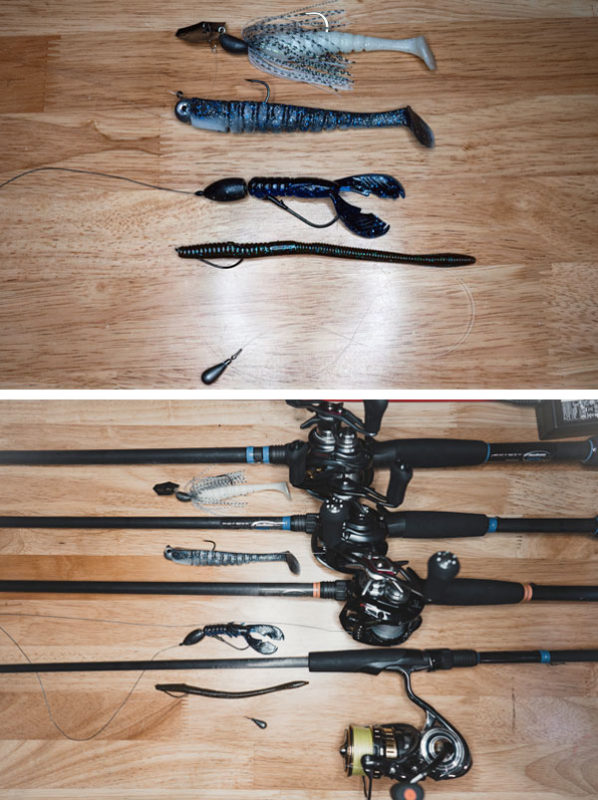 > “When I set the hook, the head shakes were so big I thought it was a catfish rolling…then peeled off sideways and ran back into the brushpile…thought it might not be a catfish. Then it got me in the brushpile and I just had to hold it — just held my rod tight. She was just down there head-shaking. I actually think the bigger ones area easier to get out — the head shakes are big enough where as long as you don’t break the line…it broke a branch and I brought the branch and the fish up.”

> “…4-6′, casting it out and letting it hit the bottom. I was able to reel it at a fairly decent pace because it was so shallow. I was trying to keep it right there on the bottom and bounce it off a little bit of shell or stumps. It seemed like when it deflected off something I’d get bites.”

> “Lakemaster got [Santee] cards done for us in time for this event. They’d never had mapping on Santee before and that made navigation and everything much easier.

> “Mega 360 because that’s how I found that brushpile the last day.”