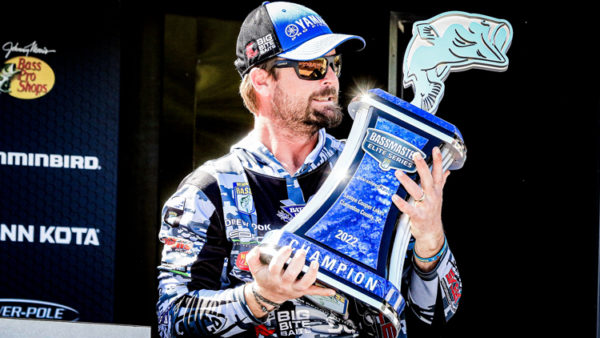 How’d he do it? He boated over 100 lbs! But so did runner-up Caleb Kuphall so that wasn’t enough. What he did was make the right bet, find the right area, hopscotched not 1 but 2 tourney delays and led every dang day! Not a problem!

Here’s the deets from Drew:

> “Going way, way back when they released the schedule, this one got circled, check-marked, asterisks, stars – I was really looking forward to this.

> “When we got to the Classic, with the weather as good as it was…started getting scared that last cold front was gonna come. Day 3 of the Classic I looked at the weather for Santee Cooper and my fears were confirmed – we would have that one nasty cold front.

> “The first day of practice it was 22 degrees that morning. That was a big punch to the gut, but the water temperature didn’t get down as bad as it could have and the weather was getting right….

> “I spent the first day of practice in the Swamp up north. I was just trying to find something where I could get a bite if I needed to actually fish. …at the end of day 1, when I saw the water temp got up to 60, I knew what I was going to do for the tournament.

> “I spent the next 2 days on the trolling motor just marking fish. Not even fishing. I don’t think I caught a bass – I just looked.

> “There was a good bit [of other guys around him]. A lot of them were fishing and looking, so I would say they weren’t covering as much water as me and [Drew] Benton were. But I did see some people that I knew were doing the same thing, like Cory Johnston, in the same areas. We ended up fishing around each other the whole event.

> “But a lot of people were still concerned – because a lot of the fish weren’t locked on the bed yet – that they wouldn’t actually do it. I was just fully committed to them making that big push.

> “I was certain after day 2 of practice. I had seen enough of them locked on beds that I knew it was gonna happen. I was concerned it was going to happen really good in other places [too], mostly the lower lake. It can get really nasty down there whenever they decide to bum-rush a place. You can get rich real quick.

> “That was one thing I was worried about but I didn’t want to spread myself out too much. I did say that if I got to the final day and needed to gamble, I would go down to the lower lake without even looking at it.”

> “We had an off day between the last day of practice and the 1st day of the tournament. So I was not able to put them to bed, so to speak. I saw them on Tues afternoon and didn’t see them again til Thurs morning. It was kind of an uneasy feeling. You don’t know if the one you’re gonna start on will be there…so there was a lot of butterflies…nervousness the 1st day.

> “I was boat like 70, not what you want in a sight-fishing tournament. When I got to my area I was the 1st one there. I was like, Holy cow!

> “I got the one I started on…caught her a few casts into the day. I went to the next one that wasn’t on a bed the last day of practice…on a bed 15′ away from where I saw her [last]. I caught her real quick and went to the other 3 females I had marked for day 1. They were very obvious beds, bright sandy ones on the edge of the pads.

> “I caught every one of them…never really happens. Usually a couple are already gone or someone else starts on one….

> “I thought I’d catch those two 7-lbers and then I’d really have to hunker down in my area and make it work that day, then I’d have to bail on it.

> [Day 2] after I caught that first 7, I went to the 2nd and she was gone. But I stayed in my area and ended up finding enough fish again. At that point I realized the pocket I had was a little more special than I gave it credit for.

> “At the end of day 2 I had a 7-lber in the middle of the pads…. Right before I had to go in I pulled up there, made a 50-yard cast to her and got her to bite. She got me in the pads and swam right at me, so I never really got a hook in her. She got off super quick.

> “Day 3 I thought I would start on that fish. Then Sat morning we get to the boat ramp, and I knew it was going to happen: Whenever we have a small craft lake advisory…I knew it would get canceled. It was a very testing, grueling, long day, sitting there at the house and watching the boat traffic in my area. The way the wind was blowing that day, my area was very protected….

> “So I didn’t know what to expect going in to the 3rd day, which was now Sunday. But I have an 8-lb lead going into 3-day tournament so the odds of me winning just went up tremendously.

> “I had a gameplan and went out and rigged more rods – then they changed it back to a 4-day event. It was a mentally-testing day.

> “I started [day 3, Sunday] on the one I lost on day 2 – she was gone. It was a trying day. I had to really scratch ’em out. But at the end of the day it all worked out. At the end I found 1 more female, was fishing for her and had to leave. Told my camera guy…on the way in might be a blessing I didn’t catch that one. While it would’ve been a 3-lb cull, it’s 6 lbs to the bottom line on day 4.

Where he found ’em

> “I did have to move further into the pads [each day. Early on the fish] were right on the edge and super-easy to see: Bright beds. Once I moved into the pads they were black beds – they were spawning on pad roots – so they were a lot harder to see. …had to sneak around, a lot of poling…that was the main adjustment I had to make.

> “A lot of the time, whenever I’d see ’em [in the pads], I’d back further off them or use the actual pads to block them from seeing me. If there’s a hole in the pads with a bed in the middle, if I could get the fish to the closest side to me, when they look up all they saw was pads – they couldn’t see me.

> “A lot of times all I could see was their tails, so it was more setting the hook by feel, not by sight. You could see when they’d get excited and when they bit it. The tail would kick and they would turn on their sides. It was really like hunting – concealing myself, camouflaging myself to be able to catch ’em.” 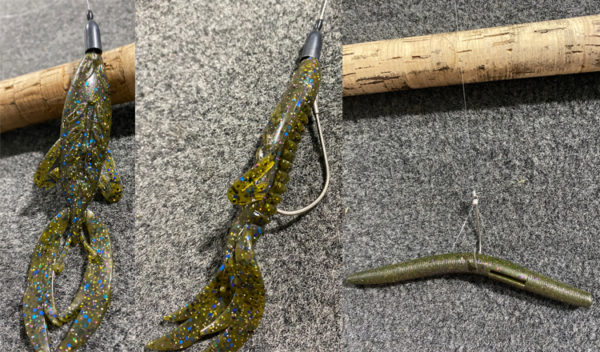 He weighed all but 2 fish on the Big Bite Fighting Frog (tilapia magic):

> “The 4-inch is my go-to size – the way the hook fits it and the way the weight is with the bait. Tilapia magic is a natural color – it has a gp base with green and purple flake, but it has silver flake too. When you’re shaking that on the bed you’ll see rays of light shoot out whenever the sun hits that silver perfect. That’s key to get the fish to commit – they’ll spin around and bite it.

> 5″ setup: “…whenever I knew a male and female were there but they were too far to see and I wouldn’t be able to tell which one bit” (the bigger bait to attract the female). 5/0 Gamakatsu G-Power Flipping Hook, 3/8-oz pegged tungsten weight, 22-lb Sunline Shooter, Dobyns 754 Xtasy Rod.

> Other setup: 5″ Big Bite Trick Stick [with the new scent] (gp with purple/gold flake), #1 Gamakatsu G-Finesse Weedless Stinger Hook, 12-lb Sunline SX1 braid to 10-lb Sunline Sniper fluoro, Dobyns 753 Xtasy Spinning Rod. “I caught 2 of them off a bed, both blind-casting but I knew where the fish were. …could see them suspended about halfway between the surface and the bottom [in 1-4′].”

> On the tapping the rod butt deal: “I want slack in my line – just enough that whenever I’m beating the bottom of the rod it’s shaking the line and in turn shaking the bait but not moving the bait in the bed. …bait stays there [in the sweet spot of the bed] but moves a lot.

> “One thing crazy to note was I fished a total of about 6 hours in that cove in the mornings, just blind-casting around, and never had 1 bite. You would think with that many fish up there, sooner or later I’d throw it in front of one. [Not even a buck!] Usually you catch one [off a bed], throw around there and get a limit.”

> Standing on his bow electronics: “I wasn’t hardly putting any pressure on that mount. My left foot was on the trolling motor bracket. It was just to keep me balanced.”

> “I wore the AFTCO Hexatron Jacket every day. It’s a super lightweight jacket with a hood, perfect for springtime. I had to have a hood of some sort to block the sun out of the sides of my eyes, to be able to see.

> “Probably the biggest key of the week was my sunglasses. Leupold Packout, amber mirror.”