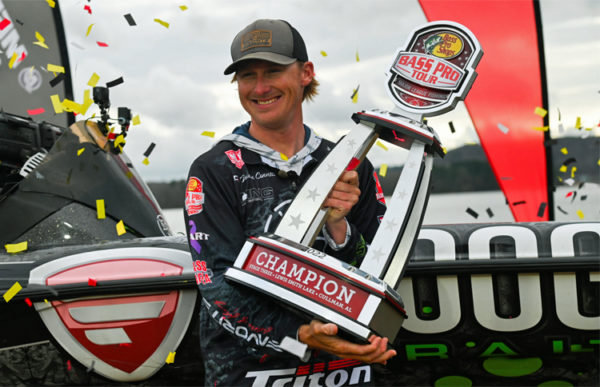 Dustin Connell is 2 for 2 on the Bass Pro Tour in pre-spawn tournaments in AL. He won the Redcrest Championship last year on Eufaula, and this time it was a few hours north on Smith. Here’s how he did it this time.

> “In practice a lot of changes were going on. The water was rising, the water was warming – I first thought it was going to be a cranking deal because the water was a bit dingy.

> “When the water rose it scattered a ton of fish out. So instead of being in drains, they were in run-ins in the back of pockets. I knew that wouldn’t be the deal later in the week because it wasn’t going to rain anymore.

> “…10 different patterns I could go do. I tried to find a deep bite but never found it. I got on a pretty good dock bite skipping a Lunker Log weightless, wacky-rigged. I would pan [with Lowrance Active Target] underneath [docks] and see 6-7 of them. I found 15 docks that I ran in practice. I thought I could make the cut doing that.”

> “I started the tournament doing that…day 1 in 3rd place. …day 2 the wind picked up really bad. I went and did that deal and caught 1-2…thought could make the cut and was like, Okay let’s go practice. I wanted to find something special. I caught a ton of fish, just no big ones – I just didn’t find anything that good.

> “On the Coosa River where I grew up, when the water’s dirty and it gets in the mid-50s the spots start stacking up on hard long-running points, channel bends – you can find schools you can catch with a crankbait or spinnerbait. They’ll group up big-time.

> “I looked for [that] that day – 8-10′, shallow humps, channel bends, flats. I found 1-2 little groups but not big ones: They’d just gotten there. The best thing was…eliminated all that. That’s what pointed me down to that clearer water [where he won]. In our format, if you can find a group of ’em, that’s how you win.

> “…Knockout Round I made the decision I was going to start out fishing the docks because it was going to be calm. But I wasn’t seeing them and a ton of boats were up there [from the other group].

> “I ran down the lake…panning around with Active Target and found 4-5 points with fish floating around there on bait. I caught them suspended on points…pitching toward them with a dropshot.

> “Late that round I checked the water schedule – 2 [generating] units were on. The dam was always in the back of my mind…ran down to check it with an hour left. A rock ridge runs out there and there was a mega wad of them – 35-40 of them…could see them coming up on bait…. I caught 20 lbs in like 20 minutes. I knew if I could make the Championship Round that was the winning spot. I slid into the Championship Round and there you go.

> “…muddy, shallow, high water…10 degrees warmer in that water. Traditional fishing wisdom is that they’d move up, but they were really scattered. That main lake had colder water. All those fish on the main lake are spotted bass, and those fish spawn in that deeper water, in mid-April. They’re like 3rd-wave spawners.

> ” The water temperature was 52-53 – that’s what kept them grouped up really good, that colder water. They’re strictly thinking about eating, not spawning.” 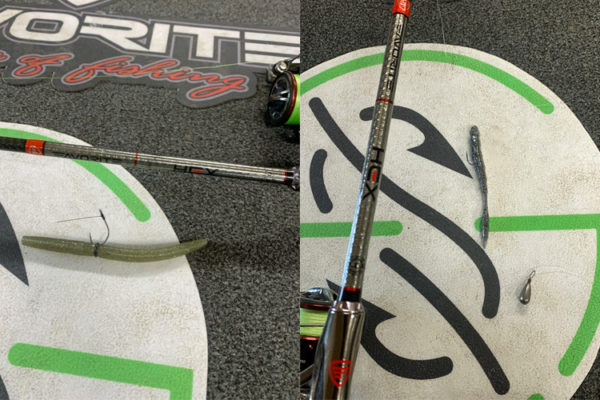 > Why not fish a Damiki: “I could have caught them on a Damiki but that dropshot worked a little bit better. They tend to get off that Damiki and you can’t work that Damiki as good when you’re pitching to them. …Damiki falls so quick – I was trying to keep it up high [above the fish] and it gets down there too fast.

> “The biggest key was the bait – they were eating threadfin. The majority of time you’d see a bait ball and there’d be 2-3 blimps under them…spotted bass. They were current-oriented, bait was there – it was the perfect recipe.

> “I was sitting in like 180′ but that rock ridge ran out probably 20 yards off the bank…up in 30′. You’d see when a bait ball came near it, fish would come shooting up off ridge….”

> “I turn my contrast up really high. That way I can see my dropshot bait and weight. The auto setting is good, but I turn the contrast up pretty high and it’s way more sensitive. Seeing where the bait was falling was key – because if it was underneath those fish, you were not catching ’em.

> “That Active Target was a big deal this week. I wouldn’t have won without it.”

ALL the baits from the 2022 Hartwell Classic!
How Drew Cook got his Santee Cooper blue trophy