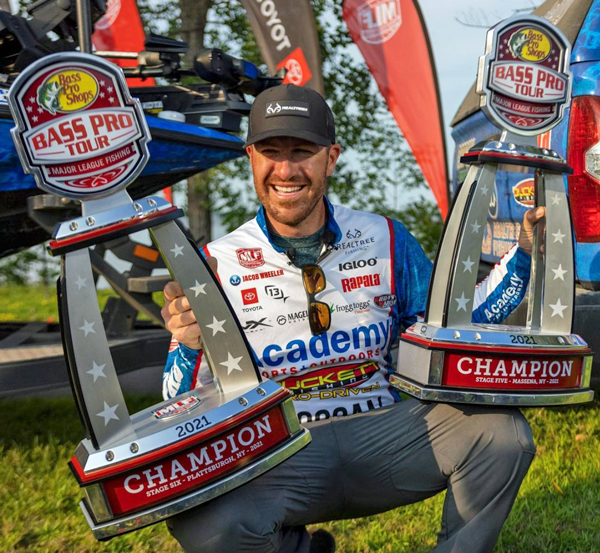 > “When we got there the water temperature was 68 degrees, and by the time we left it was 75. Smallmouth fisheries up north only have a few months to do their deal. 1 week is like a month down south. It’s a way faster deal. It’s really interesting.

> “From practice to the tournament, fish were transitioning big-time [as well as during the tournament]. I caught a lot of my fish in 12-16′ [on the 1st day, mostly using the 13 Fishing Loco Special jerkbait in mostly “green gizzard,” also “lucky charm”]…felt like more fish were pushing into 18-30′ by the end of the week.

> “…hard places like gravel would play a role. Small isolated grass patches were a major player, boulders were a huge player, and then some fish I caught were on nothing – just suspended, almost nomadic.

> “There wasn’t like 1 deal for me. You just had to keep things in your rotation…some sweet spots they’d load up on, it was all different.

> “One place I had was almost like a sunken boat lift. It was metal. They would load up on that, but sometimes they wouldn’t be there but would be within 100 yards of it. They’d just live around it but sometimes would be on it.”

> “The biggest thing was [Lowrance] Active Target. This year I swapped from Garmin [LiveScope] to Active Target. I would jump in the boat with Hunter Shryock last fall and saw some things I thought were better than Garmin – that’s why I swapped.

> “I feel like I can see fish further with Active Target. I can see fish 100+ feet away from me – that’s a huge deal when you’re talking about 1-2 more fish, especially 3+ lb smallmouth. For isolated fish like that it was a huge deal. 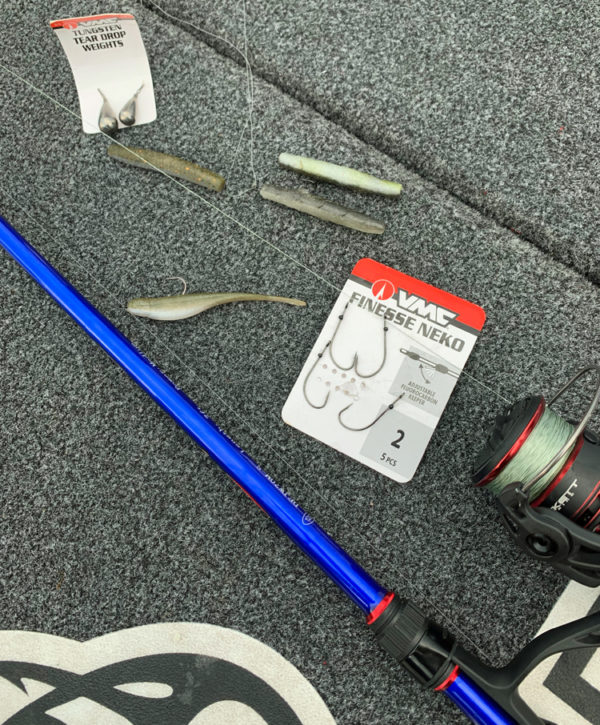 > #2 VMC Finesse Neko Hook – “I’m a big fan of threading plastics on [the hook]. I feel like I get a better hookup ratio, and I can reel fish in and be more efficient that way, with more gap.

> “I was rotating between a 1/4, 1/2 and 3/4-oz VMC Tungsten Teardrop Drop Shot Weights. I used 1/2 the most. It seemed like sometimes I could get them to react with a 3/4…sometimes they wanted a 1/4. It was just trial and error, figuring out the mood of the fish every given hour.

> 7′ 2″ MH Duckett signature Jacob Wheeler Spinning Rod: “It’s more like a M+, a heavier dropshot rod than most people use. I was also using heavier line – 10 and 12 consistently. Sometimes I’d throw 8. If it seemed like the fish were a little more line-shy at times, I would go down to 8 or 6. I event went to 4 at one point to see if made a difference…it did not. It’s just trial and error, what a lot of bass fishing is.

> “I used a 7′ M-action [signature Duckett] rod with lighter line…allows me to take my time with the fish a little more.

> “I’m just prayerful, thankful to be able to do this for a living. I think lot of times we don’t step back as professional anglers and appreciate the opportunity we have to travel this country and chase these bass. That’s a big thing for me….”