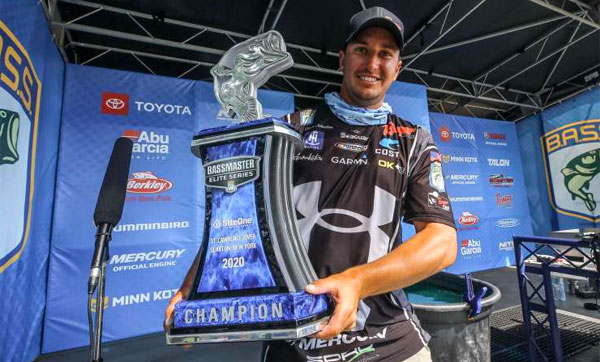 Bang! That the sound of Chris Johnston breakin’ the US bassin’ barrier by bein’ the first maple-leafer to win a Bassmaster Elite! Pretty dang stout yo! Chased him down about how he did it — here we go hey:

> “…most tournaments…points….but when it comes to the St Lawrence River I don’t think that way at all. I’m thinking, What am I going to do to win. Where can I win. It’s always on my mind — how am I gonna win it. I have that mentality right from the get-go….

> “It’s my home [water]. I already know where the fish should be…can go check spots for once, instead of starting from scratch. It’s nice having a bit of a head start.”

> “…gameplan probably go out to the lake [in the tournament]. The first day [was windy and] I stayed in the river. I fished from Clayton to the lake…ended up finding 2 pretty good spots…was huge for me to have a backup plan.

> “Day 3 was calm and I went to the lake with everyone else. I found the fishing fairly tough. A lot of areas I normally catch them on were vacant.

> “Later in the afternoon I went to a different area and started graphing some on an old spot. I expanded that couple miles…found 4-5 new areas I’d never fished before.

> “3/4 of the water I fished was new to me in this tournament. Where I fished the final day I’d caught them there before.”

> “Day 1 my gameplan was to start in the river because I thought some big fish were on the spot…and because a buoy was on it I figured people would accidentally find the fish 50 yards away on the ledge….

> “3 other boats started there. I ended up getting a 6-lber, a 5,5 and some 4s. Then that died off and I went to the lake…. I was done fishing by about 10:30 — graphed a few areas, fished some new water, some old water as well…secondary spots, stuff where I could get one big one….”

The river spot was a sharp rise from the main river edge up to 35′ which topped out and made a flat. The fIsh sat on the lip or spread out on the flat.

> “Day 2, I thought if I could get 2 more big ones out of that river spot then I could go out to the lake and get a filler limit. The river spot took a lot longer than I wanted…left there around 9:30 and had 2 5-lbers.

> “…went out to the lake again and ended up catching a lot more 4-4.25s. I went through a lot more fish to get to 24 lbs, and I didn’t like burning through fish because I knew I’d need them for the last day. I was trying to save some of the spots and not lean on them too bad.

> “I’d seen 1 good fish all practice shallow. Since it was calm and sunny, I whipped in there…2nd cast it came out and chased my hair jig. Turns out was a 6-05, so the pressure was off. I could relax.

> “…shallow rockpile. Sometimes there’s 5-6 fish on it and they usually stay on it for whatever reason. This time there was only 1…

> “…I thought Paul [Mueller] must be on a pretty good spot. So day 3 I decided to lean on them and get what I could because of the wind coming [on day 4]. I made 2 passes on the river spot, which took about 10 minutes, but I wasn’t feeling it and ran out to the lake….

> Day 4: “Mueller caught them every day and was on something special. One spot. So he had something going. I really thought my best chance to beat him was the wind….

> “To my surprise the wind wasn’t as bad as I thought it was going to be in the morning, so we could run almost wide open in the river, then it was maybe 20 minutes from the river to get to my spot. Out there it was rough but I could hold on my spot [really an area with 5-6 rockpiles].

> “The biggest thing was using my Garmin Livescope — I’m not just saying that because I’m sponsored by them. I was looking for rockpiles, and I could see where the fish were because they’re usually up from the bottom a couple feet. If I could get the bait to them before the boat went over them, I could catch them.

> “I thought I could get 22-24 lbs…didn’t think I could get a monster bag, like 27. I camped in that area all day. I didn’t want to make a run because it might take 45 minutes to get there and you have to hope they’re there….

> “I caught fish on each rockpile…marking quite a few fish….” 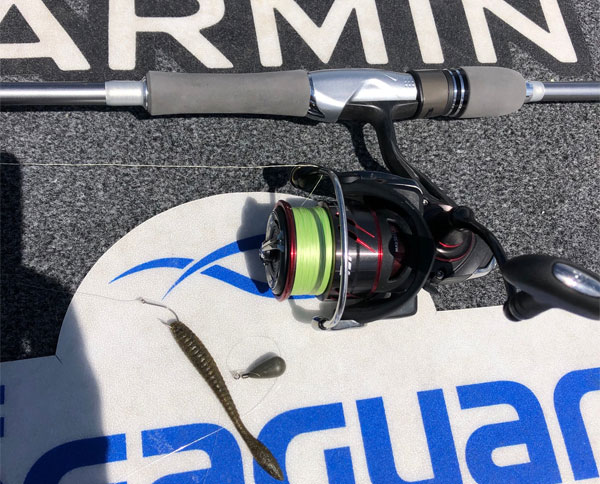 His main rig was a dropshot, though he did catch a few on a Ned Rig:

> He noted that by the end of the tourney the smallmouths were boat-shy even in the wind/rough water.

> The last day he lost a 5+: “…fought it a minute and a half, it went under the boat…line got caught in the trolling motor prop and I lost it. I wasn’t too impressed with myself.”

> “That Merc motor on the Ranger — you have to be able to rely on that equipment to go out on big water safely…rough water and have the confidence to get back. It’s just a mental part of the game.”