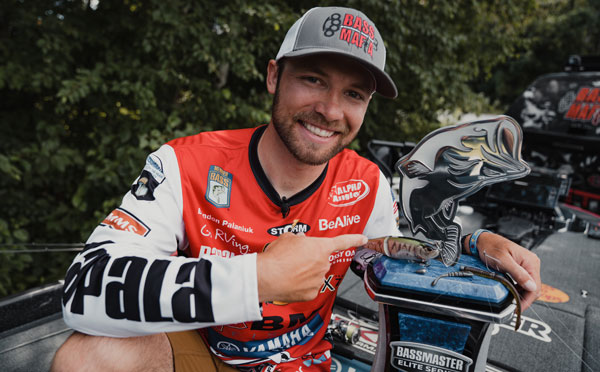 Since Brandon fished the last day of the St Lawrence Elite — where he finished 10th — he was running hard to make a full 3 days of practice at Champlain. But he’d been there before and thought he knew what might be up. What went down:

> “I was super-excited going into this one because the last time we fished here was 2017 and it was one of the most-fun events…. Even though I didn’t win [he got 3rd] I caught so many fish and had such a good time I was looking forward to doing the same thing.

> “But when I got on the water I realized how different things were. I don’t know if was the lower water, warmer water or a combination of both, but the areas I’d fished in the past, the grass was different and it just didn’t feel right…. I still caught decent fish that first day of practice, but I didn’t feel like I was around enough fish to be able to win.

> “Day 2 of practice I started in that same area, and mid-morning realized it wasn’t working. It didn’t feel right. So I made a decision to go to the inland sea and look around out deep…try to find decent quality fish. That area is known for having a quality smallmouth population, and when I’ve been there before it’s had a good population of bait — alewives, perch, rock bass, all kinds of stuff.

> “It took me a little bit to get dialed in, but once I figured it out it was almost like clockwork. I looked at the LakeMaster chart, and based on the contours I could drive to a spot, idle over it, see the fish and catch them…literally almost every single stop.

> “So by the third day of practice I wasn’t really even fishing. I was just driving and looking at as much water as I could, marking as many spots as I could.

> “We had a lot of weather in practice. It blew every single day. I want sun with smallmouth, but it seemed like the biggest factor was the wind. The combination of wind and clouds was okay — the fish would seem to roam more but it pushed the bait up on the deeper flats.

> “When it slicked off, the bait would roam wherever in the lake. But it seemed like when the wind blew…pushed bait to the edges of deep flats, and smallmouth would pull up and get on rocks and stuff on those flats.

> “So I was nervous about when it slicked off — I didn’t know how those fish would react because I hadn’t had that in practice.

> “…flats, sand to rock transition — gravelly rock stuff, and a lot would have giant isolated boulders mixed in. Sometimes they’d be set up on boulders, other times they’d be scattered out across the rock.

> “…just went around using Mega 360 boulder to boulder or followed rock veins…looking for them on 2D sonar so could drop on ’em.”

> “One of my biggest struggles after finding that much water during practice was deciding where to start. A good problem to have, but I didn’t want to make a wrong decision. I ended up finding 1 spot where the fish were just a little bit fatter than the other places so I decided to start there….

> “When I stopped there was almost too much bait…couldn’t even see through [it all]. It was one of the craziest things I’ve seen in freshwater fishing — it looked like an offshore shipwreck or something…drum, walleye, smallmouth — everything was mixed in….almost too much going on.

> “I made my first pass through there and caught 1 good one, turned back around and by then the sun got up…bait dispersed a little bit and the smallmouth set up. I just crushed them. I caught like 18 lbs in the first hour.

> “Then I was able to check places I found in practice but didn’t really fish…helped me learn how approach all those areas, and allowed me to save a lot of water too.

> “My goal…was to have a 20-lb average…what it would take to win. I figured 17 a day would get you in the first cut and 18.5-ish would make the top 10. On Champlain, the difference between 3.5- and 4-lbers is pretty monumental.

> “Day 2 was my biggest grinder of a day. I started on same place, but no bait…lot of white bass moved in. I caught a couple good ones there in the morning and I think I had a limit [quickly], but they weren’t as big. …fish more water…not as many big bites….

> “The first day we had a little bit of weather in the morning, then it slicked off. Day 2 was flat calm…had to adjust as that day went on. I had to figure out how those smallmouths were positioning. The first day they were scattered, day 2 they were on more specific boulders or tighter to specific little rockpiles and things….

> “I went to go fish the end of a pipe I’d caught some smallmouth on…grass around it. I had a few big largemouth follow [his glide bait there on day 1]. I rolled up on the end of the pipe in 15-17′ and threw a Neko Rig because that has better odds of catching a largemouth or smallmouth [vs a dropshot] — generally largemouth want a bigger package.

> “…moved around that area and fished some newer water, but more guys had fished those areas the first 2 days than what I’d expected. I figured the pressure had [moved] those fish so I went to looking for smaller isolated rock spots…was able to find bigger fish that way.

> “The 3.75-4 lbers had broken up out of those groups. I’d find 1-2 on those places and cover water. …flat calm…able to jump around and fish a bunch of places [on the trolling motor]….

> “…had about 10 minutes…threw a Storm Arashi Glide Bait…4-lb largemouth. I balance-beamed it with a smallmouth and it was pretty much even dead even, but he got extra credit because he ate the Glide Bait….
https://www.tacklewarehouse.com/Storm_Arashi_Glide_Glide_Bait/descpage-SAGGB.html?from=bblst

> “Day 4 I actually tried to throw an uppercut early and went largemouth fishing. I thought if I could start out with 5-6 lber it would set the tone for the day. I caught a couple fish but didn’t get that big bite…decided to go smallmouth fishing…do what go me here.

> “…got some wind in the morning which pushed the bait up on those flats like it did in practice, and a lot of those bigger smallmouth started to show up. I started catching ’em….

> “My timing got right on 1 place in the afternoon — I had that magical 1-2 hour period where it seemed like every boulder I went to had 4+ lber on it. …think I intercepted a group of fish that was following bait….

> “It was incredible for 1-2 hours, then the bait moved on, and I quit seeing the bait and the smallmouth.

> “…last big one…didn’t hit Spot-Lock, drifted off of [the great spot], and I as I was working my way back up I saw balls of bait and smallmouth underneath them — out in nothing, a 40′ sand flat. …in my mind it clicked — they were just following that bait. …made the decision to jump to my next area downwind to see if I could intercept the same group of fish again. …first drop I caught almost a 4.5-lber….” 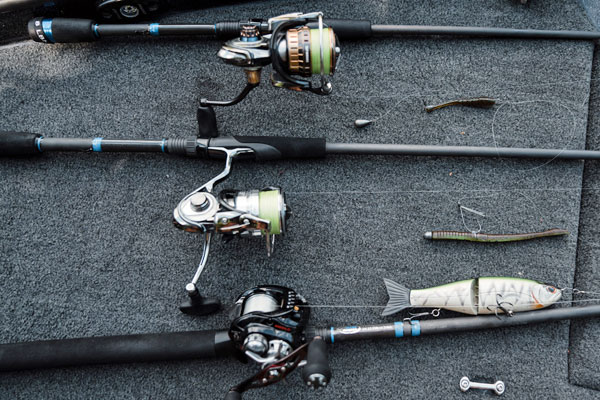 > Swimbait: Storm Arashi Glide (oikawa mesu), 25-lb Seaguar Tatsu fluoro, Daiwa Zillion HD Reel (7.3:1), Alpha Angler Wide Glide Rod. “When I caught the fish I was doing the standard 3/4 handle turn…. When you do that 3/4 turn that pulls the bait to the side, then a 1/4 turn and stop, and that allows it to glide.”

> “I’ve gotta give credit to Skeeter and Yamaha for my ride back. The forecast called for wind in the morning…but then it slicked off during the day and I was like, ‘Oh we’ve got plenty of time [to get back[. Literally as I start leaving to head back, the wind picked up.

> “It went from 5 mph to 15-20 mph and instantly went to 5-footers. I had a 10-mile run and 18 minutes to get back to weigh-in. I thought, This is gonna get sporty. I had to push it much harder than I normally would or should — I felt like I had a shot to win, but was gonna burn that if I didn’t make it back in time.

> “So to have nothing go wrong pushing your equipment that hard, I’m thankful for that.”