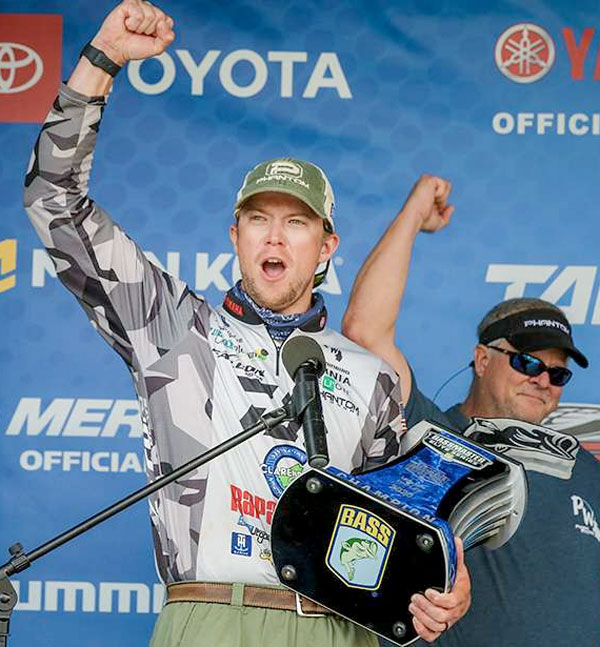 Check this out — standings after day 3 of the Lake Fork, TX Bassmaster Elite Bassin’ Festive Occasion:

So I was like, Well obviously that’s cuz he was catching overs (over the slot limit) and no one else was. That was the only way my brain could make sense of it …BUT that’s not what happened. No slot was in effect because it was catch/immediate release. In other words, Patrick:

I checked and Patrick was NOT fishing live shiners so…. Okay 104-12 is impressive, but those stats are mind-blowing man. Here’s how it went down:

> “…when they announced it would be in the fall, I knew it wouldn’t be spawn or post-spawn so I knew I wouldn’t be beating pockets for spawners and I wouldn’t be looking for schools offshore. …I’d fish standing timber the entire time.

> “l was already in the Classic [points] so I just wanted to catch the biggest bass in the tournament and win a trophy.

> “My goal was to fish big giant swimbaits and big wacky worms, and pick off isolated big fish in the timber.”

> “…threw every single swimbait I owned…5 different glide baits, an Arashi Swimmer, a big Mag Draft, a little one, the big Zoom Swimmer, the little 3-inch….

Except a hard jerkbait:

> “I already had it tied on because of what I did at Cherokee.

> “…in timber I’d catch 2-3 lbers and just leave them. I didn’t know the potential of what was out there — no idea. The biggest one I caught was a 3.5 on a swimbait.

> “The next 3 days I started putting it together…fine-tuning, getting rod and reels combos set up, casting and working [jerkbaits] through the timber…. If a boat was within a mile of me, I was throwing a swimbait. I didn’t want anybody to see me doing it.”

He fished the same basic way every day, but different areas every day. He did NOT have a magical spot:

> “I expanded on them every day — new water every single day.

> “I felt like I was lost all week because nobody was doing what I was doing. Maybe I was completely missing the boat. Every spot I went to, I never fished behind anyone, I wasn’t sharing any water….

> “I was catching fish so I wasn’t going to do something different…. Then is when I realized I’m not fishing against the competitors, I’m fishing against the fish — every single time. Just catch what I’m capable of catching and don’t worry about what everyone else is doing.

> “[Timber/wood in] clearer water [and] baitfish — if they had all the right components, they had the fish on them. A couple stretches had 2-3 miles void of life. [Some areas had fish] shallower or deeper, but they weren’t the fish I wanted to catch so I’d just go elsewhere. I felt like Lake Fork was such an amazing fishery, it had fish everywhere. 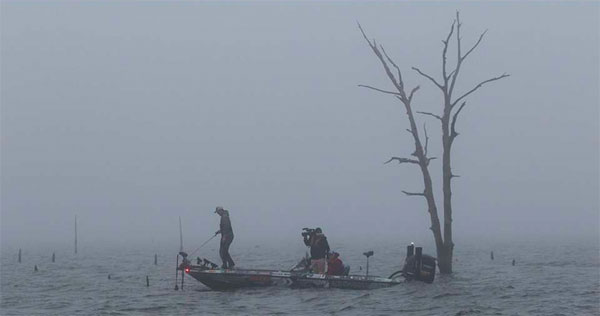 > “I caught them in more than 45′ into 2’…deep water a little bit close by. …pushed into a pocket, a secondary point or a main-lake point. The last day I caught them all in the back of a pocket, 5′ and less. Really depth was the most un-constant thing.

> “…never cleared an area dry. I’d make 1 pass, and never went back to an area the same day. I’d fish my way back to the boat landing and call it a day.”

He fished 3-ish jerkbaits — a Rapala Shadow Rap Deep and a couple Japanese ones (Megabass and Duo) — and had 6 rods rigged up, 3 with 12-lb and 3 with 14-lb fluoro: 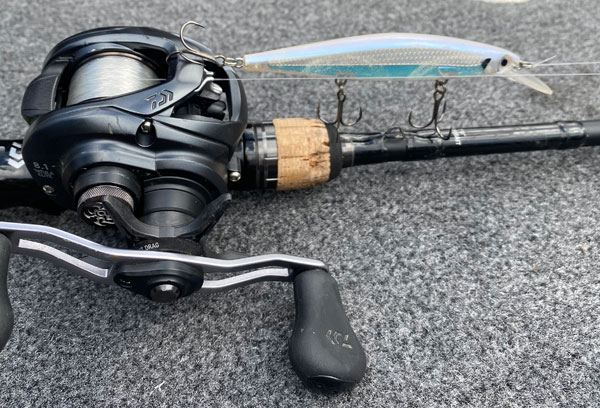 > “Mentally it made a difference — I didn’t lose anymore after that.

> “I was straight up just plugging it through there [the wood]. When I got hooked up, I’d kick it up on high and go to them.

> “I lost 3, maybe 4, all week — good ones. Some logs were laying down, and they’d go underneath or wrap me around them, still hooked. I’d fight them for 2 minutes — finally they’d come unhooked. That Sufix Advance Fluoro — you could pull a truck with it. I’m amazed how abrasion-resistant it was.

> “If you weren’t skinning bark, you weren’t catching fish. It’s the same thing at home [SC]. I’d cast 20′ past it to get the bait to the right depth by the time it got to the piece of wood. I got hung up a bunch…30 times a day.

> “…you had to cast in there more times than you’d think. You’d make 7 casts and get nothing, then make 1 correct cast and catch 1. And you had to make certain casts…left side nothing, if cast to the right side you’d catch one…had to learn that.”

He also threw other baits because he couldn’t help himself:

> “I threw swimbaits a bunch, I threw a spinnerbait, a DT10 and DT 20 — I just never could really get anything else going.”

He said the bite was consistent for the most part:

> “The 1st couple days…bit good. [Morning good]…9:00-11:00 wouldn’t catch much — like 2 fish and they’d be shorts. In the afternoon the bite would pick right back up and I’d start culling again.

> “Daiwa, Rapala, Phantom Outdoors…local apparel company back home that believed in me from fishing the Opens. Without everybody believing in you from the get-go, you’ll never get there.

> “SonarPros and Relion batteries…running 1 battery for 5 graphs. [More on his setup hopefully next week.] Also Falcon Boats — now that’s 2 times in a row the TX Bass Fest was won by someone in a Falcon boat [Brandon Cobb won it last year].”