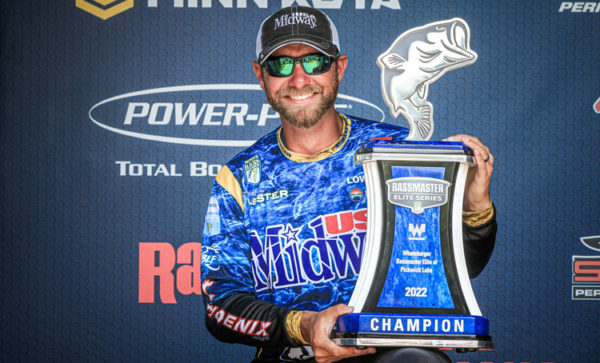 > “Pickwick is a lake I’m fairly familiar with, especially the ledges. When I started my career in 2014, I would’ve told you that ledge fishing was a weakness of mine. Pickwick and Guntersville is where I went to learn to ledge-fish. So I kinda knew a little about how it set up, what to look for….”

> “The first day of practice I spent 85% of my day just idling, looking…found 7-8 schools but nothing I felt like I would have to myself….

> “The 2nd day I fished a little different section, down near the TN end…another 4-5 schools, again pretty obvious stuff. …spending 80% of my day graphing, but knew I hadn’t found anything have to myself and knew that would be very important in this tournament.

> “I noticed that the further I went upriver toward the Natchez Trace Bridge, the less competitor boats I saw. So the 3rd day I spent all my time up there, looking for little sneakier stuff. I realized from past years…either you have to fish deeper than most are looking, or shallower which is typically the best way to do it. Because those fish are harder to find – harder to see on your graph…those shallow fish in 5-8′ you have to find on side scan because you won’t on down scan….

> “…little island, always a good place…idling and saw a little tip sticking out in current…saw a school sitting there about 60′ out to the right. Another competitor’s boat was fishing 200 yards from me so I just marked it…came back when there weren’t any boats. I made 1 cast and got a bite, then another cast and caught a 3.5-lber.

> “That was the place I was gonna start. I felt like if there was any place I found that no one else did, that would be the highest probability. It was 4-5′ on top and dropped into 8′. …little clean spot, little shell bed.”

> “A big key to my tournament was every day having that fast start – I’d spend 1.5-2 hours looking at new stuff, trying to find other sneakier stuff I thought I’d have to myself. I’d look for schools of fish moving around – when a lot of boats get on community holes, they start busting up those schools and you’ll see them moving around on different places.

> “Day 2 I was boat #12. I ran to that spot…nobody’s there. …caught 5-lber on the 4.0 and another keeper, then they got funny on me. I could see them on Active Target, but they didn’t want to bite the crankbait, they’d just bump it. They wouldn’t bite the jig.

> “I picked up Neko, and it was every cast on the Neko…just lit ’em up. Before long I had a good bag. I think I caught all my weight off that spot the 2nd day. I stayed there longer that day than any other day because up to that point I spent maybe an hour on that spot. So I was still trying to learn the spot. I stayed there probably til close to 10 am….

> “Day 3 I ran back up there…threw the crankbait first to check their activity level, their mood. Day 3 I didn’t catch any – maybe 1 small one on the squarebill. I threw the jig, nothing. I throw the worm in there and they start eating again.

> “…fished some other places…my goal was 20 lbs every day. I went and fished a little spot, made one cull, then went and checked a place I caught them off in a Bassmaster Open 2 years ago. They’d not been there day 1 and day 2, but I rolled over them day 3…could see them on the Lowrance down scan, 7-8 of them. So I got spot-locked and just lit ’em up on the crankbait [Strike King 6XD].

> “Day 4 once again the goal was 20 lbs. I told myself if I catch 20 lbs I’ll be hard to handle because going into day 4 I had a 3+ lead. So I knew someone would have to catch a bigger bag than had been caught to beat me.

> “My starting spot…I was wondering do I have enough fish left. I get there, ease up to it – I can see them up there on Active Target. I made a couple casts with the crankabit, then I went straight to the Neko worm. My first bite was a 4.75-lber and I was instantly breathing a sigh of relief.

> “I caught a couple on a Neko worm, caught a couple on a 6XD…a really great bait over there is a 3/4-oz scrounger. I throw it out there [for the first time that week] and sure enough I catch a 5-13. That was the most memorable fish catch of my whole career because I knew in that moment that sealed the deal.” 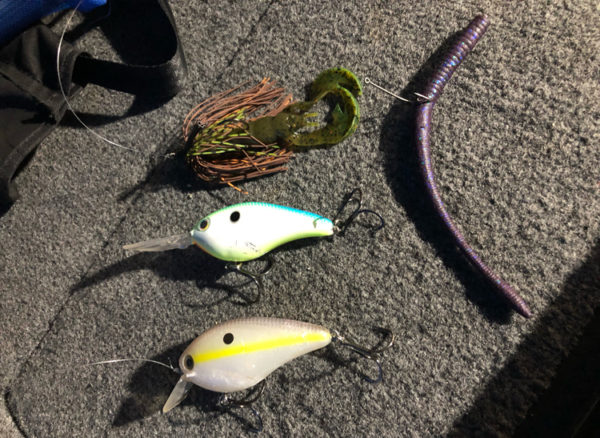 > “It’s a lot of different baits because that’s what ledge fishing is about.”

> He replaced the trebles on both cranks with #1 Mustad KVD Elite Trebles.

> 3/4-oz Scrounger head, 5″ Castaic Jerky J (green shad), 15-lb Vicious 100% Fluoro, 6.3 reel, 7′ 4″ MH Mustad Instinct Brandon Lester signature rod. “I try to keep it close to the bottom. When you reel a scrounger it will try to rise…couple times through the retrieve stop it and let sink back to the bottom…. I feel like it needs to be riding 1-2′ off bottom unless a school is 6′ off the bottom.”

> “I couldn’t have done it without ’em. I have all Lowrance – 2 HDS-12 Lives up front, 2 at the console. I spent a ton of time at my console looking for schools of fish for this tournament and found that winning school of fish with it [with] side imaging.

> “The rest of those places I used side scan and down scan. When I got up front I used Active Target. Every time you catch a fish out of one of those schools, the school moves a little bit. So having Active Target lets you know where they are to make the perfect cast.”

> “When I started my career I was a custom rod-builder. Every rod I fished with the first 5 years of my career, I built every one of them. I learned what makes a good fishing rod…put all that stuff I learned into these Mustad Instinct signature rods – 14 models I hand-picked to cover any situation you can face in the bass fishing world.”