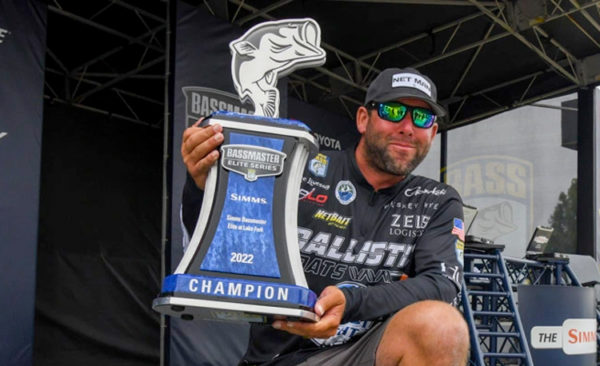 Yep Lee won at Fork – his home lake – for the second year in a row AND has also won the last 2 tourneys he fished (the Ross Barnett Open earlier this month) which makes him 2 wins in 7 tries this year = 29% winning percentage. That’s pretty dang stout! Here’s what went down in this’n.

> “We started on Sunday this time because we had an off day on Wednesday. There was a big-bass tournament with like 1,000 extra boats on the water on Sunday, so I didn’t want to show anybody anything, whether it was our guys or other guys – because in my mind I was going to catch them on all these other spots….

> “I just went and looked at a bunch of stuff I’ve never looked at before. I never made a cast the 1st day. I found that spot where I caught most of my fish the last 2 days.

> “Days 2-3 I found probably 25 different schools I thought I could catch 25-30 off of. Well they ended up leaving [in the tournament] and the ones that stayed people sat on the whole time….

> “I knew it would fish would fish really small. I thought I would catch them in the afternoon in all those really deep schools.”

> “…I ran up more north than I would normally fish this time of year and fished that 6th Sense 300DD and Hog Farmer Stand Up Hair Jig…shell bars in 8-12′.

> “There was a couple of them – one of them I sat on longer. I knew about ’em but they weren’t great. You might pull up there and catch 1, you might pull up and catch 30 lbs. They’re smaller 1-cast deals, not schools, you can’t graph ’em, you just have to fish ’em.

> “The 2nd day I…caught 1 good one in that little bit deeper spot and that was it, then I went and looked around. I went to the spot where I ended up catching them the 3rd and 4th days really good. I caught three 5-lbers off it…and looked the rest of the day.

> “The first 2 days I got to look a lot in the afternoon but never found anything new.

> “I went through all my progressions the 3rd day…I lost one on my first spot, hit a dozen new spots I hadn’t fished and nothing, the mid-range depth stuff, nothing. Then I came to [his main spot] – I got there between 9:00 and 10:00…caught 23 lbs off it in probably 2 hours.

> “I went and ran whole bunch of stuff after that…probably drove 2.5 hours without stopping and never found a group of fish. I never put the trolling motor down.

> “I ran back to a group of white bass to try to get the whites fired up – if you do that, sometimes you can catch a big one. I caught 2-3 whites on the big flutter spoon, then I threw my jig in there and caught that 8-lber.”

> “I thought it was time to find another fresh school, so I went and ran it all. I wasted hours driving around and idling – I looked at the whole lake pretty much. I went to where I caught that 8-lber the day before but they weren’t there, the mid-depth fish were not there – at the end of the day I knew I had to go back to that spot.

> “…the jig again, the big worm – I caught 2-3 more and was upgrading. That’s when my weight really jumped up. I had 1 bream bed I was going to go to at 2:30 [but] my last good one was 5-05 and it spit up a big shad. I was like, Man these fish are feeding on shad. But it was really thick and I didn’t want to get my crankbait hung up.

> “I waited til the last second…I picked up that 6th Sense 6″ Flutter Spoon and on my first hop I catch an 8-03. It just had 1 hook in the bottom lip – I had that Gamakatsu G Finesse on there thank God. I fought it, it got stuck in a tree, I got her back up, lipped her at 2:45 and that was it. That was my final bite and final fish. It weighed 8-03.”

> “It was a little do-nothing high spot in some timber, about halfway back in a major creek – really thick timber. No point comes off the bank…[it’s] a high spot that comes up before the channel…a little section in the timber that’s kind of clear…hard bottom. The shallow side was about 13′ and the deep side was 17′.

> “They’d swim around that little hard, clear spot, and they’d get on some trees every now and then. I was using Mega 360 – they were constantly moving, they never sat still…and Spot-Locked where I thought I could get them out of the timber the best.” 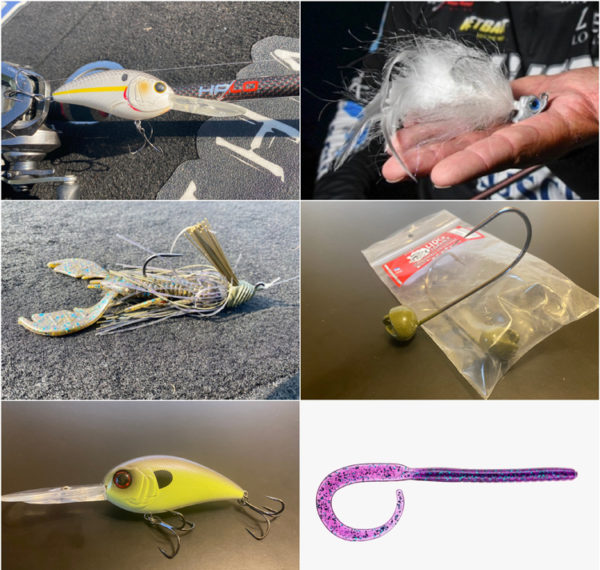 > “I was finding my fish with Humminbird Mega Side Imaging and Down Imaging, finding those fish in the timber.

> “When I was fishing my spots, the 2 things that were huge for me were Spot-Lock with the Minn Kota Ultrex, and the Humminbird Mega 360. A lot of times I’d Spot-Lock and fish out of the back of the boat because of the way the wind was blowing. And I was watching them on Mega 360…pan around and show where those fish were moving every cast.”

> “Ballistic Boats, Mercury Marine and GeigerTec mounts. I ran that thing like a dog up and down the lake every day…it was rough…. I have confidence I could run that could run that rough stuff as fast as I wanted to and nothing would break.”