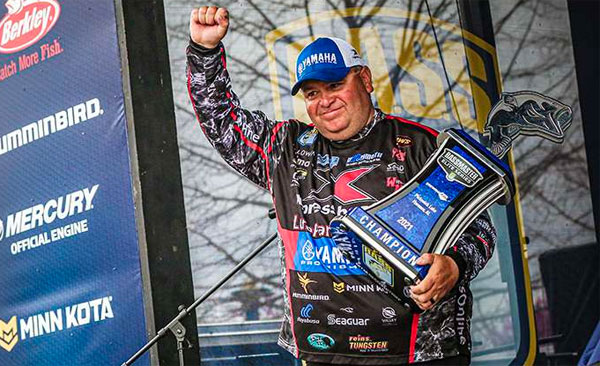 Bill Lowen has been trying to win a blue trophy for almost 16 years, and finally he got a tournament that set up just for him. Meaning conditions were brutal and in some ways more river-like than lake-like, with all the flooding and current – which delayed the start for 2 days. Here’s how it went down for him:

> “I was like, you know they probably need to cancel this deal [because of how bad it was]. They were talking about moving it to August, which would’ve been horrible.

> “Conditions were pretty bad man. Thank God they gave us a 2-day deal like they did, or it truly would’ve been a mess.

> “I was pretty much freaking out…didn’t know if I’d even catch a fish. My gameplan was to fish grass flats on high spots…Kogers island. That was my gameplan, but knowing what was going on with the floods I knew it wasn’t going to be good. I figured it would be destroyed. So when this deal started, I was nervous as could be.

> Day 1: “I roll down there to my deal, where I’m expecting to see 50 boats – it’s a popular spot and there’s…one. I looked at the conditions, dropped my trolling motor and tried to go forward but the current was going so hard I can’t make any forward progress.

> “So I think, Where’d the fish go. They went somewhere. …big laydowns on the island…were dry in practice…had to go there. The 2nd tree I got a bite. I missed that fish, but at the next one I caught a 3.5-4 lber. That gave me confidence to settle down and start working on that wood, and that’s exactly what I did.

> “I had a decent limit. Then I saw 1 little patch of reeds on that island about as big as my boat. I pitched up, got a hit and lost that fish. The next pitch I caught a 5-lber off the reeds…caught another keeper. I thought, Maybe they made the transition to those reeds as well.

> “…immediately went and started running reeds. The first set I caught 4-5 keepers, caught a big one…next set I caught another big one. I thought, Okay. I had 21 and some change….

> “Day 2 was kind of a repeat. I started on my island and literally caught what I weighed in off the island. I caught them the first 2-3 hours of the morning, then started running those reeds again…no bites….

> “The 3rd day I caught what I weighed in – 17 and some change – on that island and started running reeds…had 2 great big ones try to come up and get a swim jig and they missed it.

> “The 4th day comes and I roll down there to the island. The water dropped almost 2′ – so most of the wood I was catching them on was dry…wood that had 4′ of water on it was now in 1.5′. And the banks are red clay…blew right on it so it was like chocolate milk, red mud….

> “I made a quick pass hitting the farthest tips of wood – didn’t get a bite. It’s not usual for me to give up on something that easy, but I was calm…I left and started running cover with water on it…bluffs swings and docks. I was fortunate to get a couple bites out of the gate to calm me down.

> “I caught a fish off a dock, then went to bluff ends and caught 2 immediately. There were 2 bluffs that had a section between them with 4 docks. I fished up to those docks, and my 4th keeper and 5th keeper – that big giant one – came off a dock. 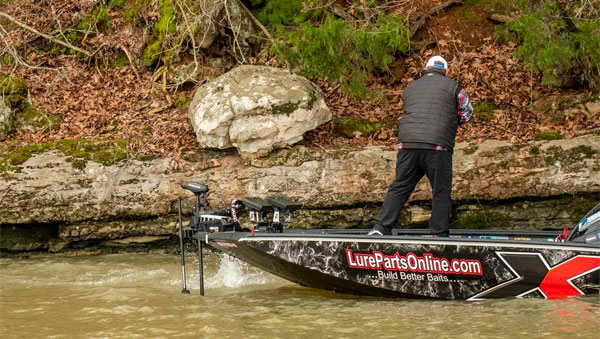 > “I caught some more fish that didn’t help. Right at the end of the day I stopped at a creek mouth…piece of wood on a flat, and caught a fish I culled with.

> “All week long I felt like I was in my comfort zone. It’s the same way I grew up fishing on the Ohio River. The only difference was the fish were 4 lbs and they’re 12 inches at home.” 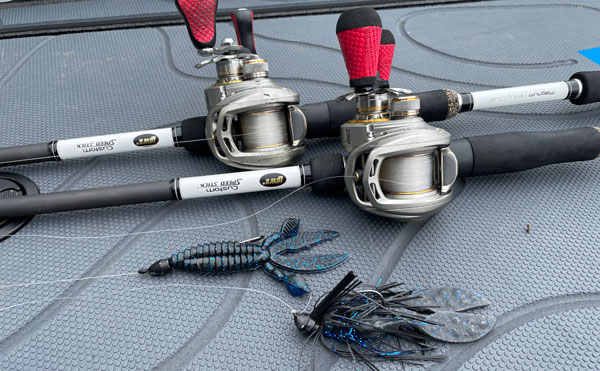 > You can’t buy the jigs fully made: “You buy the components – a head 3-pack and skirt 3-pack, and build what you want. When it’s all said and done you have less than $3 in a jig.”

> “When I was using the 3/8 I was letting the current float it through the wood. I don’t know how to explain it – it’s something I did growing up on the Ohio River…something you learn through trial and error. If it’s not right, the jig will get stuck in the wood. When you’re floating it, you feel it just bumping the wood. You might have to pop it once in a while…typically the current’s pushing it for you.

> “I pitched to the edge of the reeds. You didn’t have to work it. You’d go to lift it up and they already had it.”

> “I caught fish off the 360…caught fish off a laydown underwater I would’ve never seen – that was a fish I would never have caught [without Humminbird 360]. I have a dedicated unit that runs 360 all the time. Being a shallow-water angler I’m amazed at how well it reads in 4′ of water.

> “…Minn Kota and Humminbird, and that tin [Xpress] lets me fish how I like to fish.”