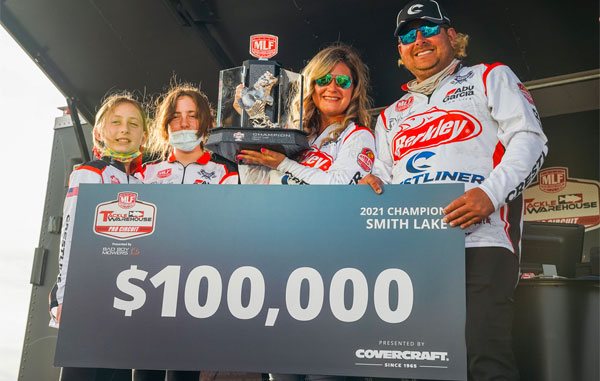 By now you gotta know John Cox never stops fishing. Heard rumors about the guy sleeping in his boat, tying FG knots blindfolded and never getting haircuts (lol). Anyhow, he ended up winning this’n by 5.5 lbs with really not many bites. Here’s how it went down.

> “…left Sunday evening and got to Smith noon Monday. I got like 5-6 bites that day, all kind of random. Nothing looked really good, but I saw it was probably going to warm up…a warming trend the whole week. I thought it might really get good, but then I went the 2nd day and only had like 2 bites so I wasn’t really too sure what to expect.”

> “I started off the first morning and caught 2 keepers, then a 5-lber which goes a long way…. I caught 5 largemouths that day, all on the jig. I never thought that bite would last 4 days – it never has before. A front comes in, something changes, so I kept thinking it was going to change but they just kept eating it.

> “I was able to avoid all the spotted bass til the final day. I caught like a 4-lber in 1.5′ of water. It came up and inhaled the jig, then got hung in a bush. It was hanging out of the water…stayed on and I was like, Oh my gosh I might actually win this thing.

> “I was just flipping it, pitching it…to wood, to rocks, out in front of the boat…a couple places I knew they spawned in the past.

> “During the tournament it changed…started warming up and I’d catch like half and half – half swimming it and half pitching it. Just random – I tried to figure something out, to find a pattern, but I really couldn’t. …catch one swimming it and I might swim it for the next 2 hours and not get another bite. But as soon as I’d flip it [to] a dock or piece of wood, I’d get another bite. It was real random, but they did want that jig.

> “I tried so many other things, but I couldn’t get them to bite anything else so I’d just go back to it.

> “I tried to find dirty water – it holds the heat a little bit and doesn’t cool off as quick. It was so clean everywhere. A couple areas I caught ’em the visibility was only 1.5’…all the way to where you could see down 3-4′.

> “When I saw it warming up I wanted to go looking for beds, but I kept throwing it at the bank and moving. So many times on day 3 I struggled. I was just going to pick up and completely abandon what I was doing, just troll and look for bedders. Then I’d catch one and [think], I just have to keep doing this, just grind it out.” 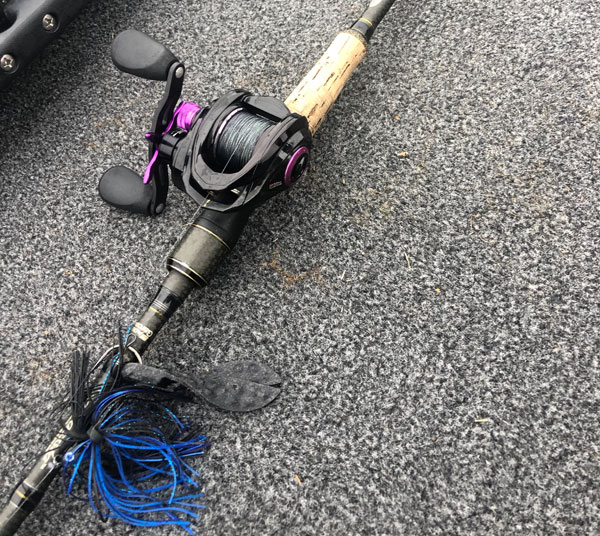 > “That reel was the deal. I always threw that jig on a 7.3, and it would just wear my arm out. The 8.0 didn’t work me like the 7.3 would’ve…same reel that I throw the Frittside with [slower ratio for the crankl] and I love it. When I started throwing [the 8.0] in practice, the light bulb went off….

> Why tie directly to braid: “I was asking myself that all week. With the water that clear, maybe I needed to throw it on fluoro. I actually rigged one up on fluoro…but when they would eat that thing it was down their throat.

> “MaxScent – I hate to even talk about that. Look how the Flat Worm dominated smallmouth fishing. With that chunk…I saw most of those fish eat the jig [visually], and a lot of times they came from 10′ away and just grabbed the chunk. Normally [if you didn’t see that bite] you’d set the hook and lose your trailer, but I would give them a split second and they would just take the rest of the jig.

> “Once they tasted it, they swallowed that jig. Everyone was fishing the same stuff, and I really think I caught a lot more fish because the MaxScent made ’em take the jig.”

> Electronics did not factor: “…sent me a LiveScope right before I left…left it in the back seat of the truck…. I actually turned off my units the first morning – the water temp was so cold I was afraid to see what it was. When I turned it on mid-day, it was 55 and I was like, Oh my gosh I’m so glad I had no idea all morning how cold it was.”

> “Battle Born batteries – when I’m covering water I feel like the trolling motor performance is so much better…full power all day. It doesn’t slow down like lead ones would later in the day.”