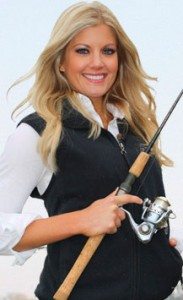 I’ve always believed outdoors programming needs a more feminine touch, and apparently someone at FLW Outdoors agrees with me. Beginning March 2011, Laura Schara will take over hosting duties for FLW on the Versus Network. Schara announced the news this morning in a radio interview on the Minnesota-based KFAN Power Trip Morning Show (thanks for the tip fivebass.com!).

I’m sorry Mark Zona, but in my book Schara definitely gets the nod as the prettiest personality in outdoors programming. But Schara’s a lot more than a pretty face. She holds a Bachelor of Science degree from the University of Wisconsin. And she’s got some outdoors TV cred with shows like Fox Sport’s Due North Outdoors and Versus’ ATV Sport TV.

This girl catches and shoots stuff, too. From her website, LauraSchara.com:

Her best catch to date is a 6ft, 77lb. halibut caught off the coast of Alaska. She is also an avid trap shooter and enjoys competing with her sister in a summer trap shooting league.

But enough of the outdoorsy stuff. What interests me more about Schara is the fact that she’s also a fashion correspondent. How shell-shocked do you think she’s going to be when she’s dropped into the middle of what’s arguably one of the most fashion-challenged groups of people on the planet?

You know… pro anglers? The racoon-eyed, ‘I wear a tournament jersey 300 days out of the year’ folks.Â Maybe she can help some of those dudes out with their wardrobe. But I’m not going to hold my breath waiting on Jay Yelas to show up to weigh-in wearing a pair of Ed Hardy jeans….

This Guyâ€™s Making Us Look Good
We Need To Break This Record Too
To Top
We use cookies to ensure that we give you the best experience on our website. If you continue to use this site we will assume that you are happy with it. Cookie settingsACCEPT
Privacy & Cookies Policy