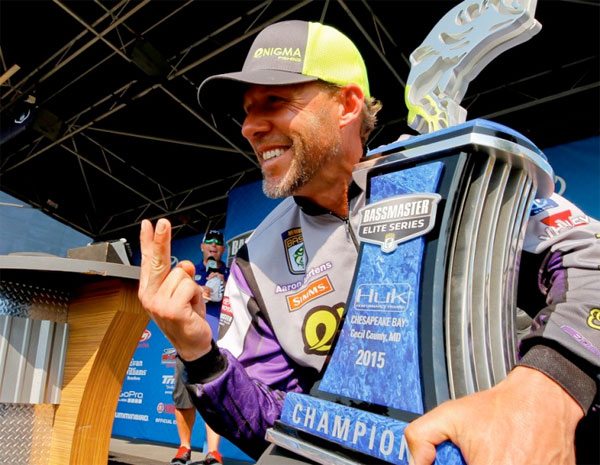 Interestingly, Aaron felt mental strength was more important than anything else in his win. Here’s what he told me:

> “It wasn’t that good down there [Middle River]. They were nice fish, you just didn’t get a lot of them. I could’ve gotten a lot more bites by the ramp, but they didn’t average as big as down there. I’d rather fish big fish and get fewer bites.

> “Every time you got a bite it was a big one, but they were an hour or two apart. But on a bad tide that’s not that bad.

How he found that area, which Mike Iaconelli â€“ who knows that water â€“ thought was dead:

> “I spent 4 half-days [noon to 8 pm] on pre-practice. I fished everything. [He didn’t fish the Middle River areas much, but] it looked so good on the map. Piers, marinas, grasslines â€“ it was the best-looking creek on the lake, so I had to go down there.”

> In practice, “I went to the Gunpowder and checked some stuff â€“ it was still good. I ran down to the Middle River and in 6 hours caught 19 lbs. I landed a 5, a 4, a 3.5 and shook off 3 or 4 that were the same size. The water was flooded and nasty. I figured should get better every day.

> “I started up north the first day. I fished 20-30 minutes, then looked around me and boats were on everything. I’d already decided I was going down there [to the Middle River] but I went down sooner than I was supposed do.

> “When the tide started to get right, the fish were aggressive and big â€“ if you made good casts repetitively. Getting a bait far enough past the structure was tricky. There were posts, boats, ropes, cables and hoses â€“ I didn’t think about it at the time, but it was a very difficult way to fish. I like to work, I like that kind of fishing.

> “To me it’s a challenge. It’s fun to be able to work extra hard and get results. I’m just really fortunate because no one else went there.”

> “I had 5 fish the first day, 6 the second, 7 on the third and 8 fish the last day. I could’ve caught more, but I ended up breaking 4 fish off barnacles â€“ good, solid 3-4-pounders, 2 on heavy line and 2 on light line. It didn’t matter â€“ the barnacles were extremely abrasive. I also missed 10-12 fish that I hooked and missed.

> “I didn’t have a perfect tournament, but for everything that went wrong I had unbelievable things go right. Like I got 2 fish on a backlash.”

> “On the third day I got 2 fish on backlash. I backlashed quite a bit because I couldn’t see [the cover]. I’d hit a piling or something, and backlash. One I pitched way in there, like three pilings away. I’m pulling the backlash out as fast as I can and reeling it in as fast as I can, and as soon as I reeled it was heavy. I was like, Oh no!

> “I couldn’t set the hook. I just kept pressure on it. I felt it shaking, but it never came out of the water. I dragged [the line] around a piling and felt the fish hit it. I just held it there â€“ it’s still 25 feet away. I felt him pop around the piling, then he hit the second one a little, not as hard.”

> “My whole career has been full of disasters, as many or more than any other fisherman. But they’ve been balanced by unbelievable things happening, like miracles almost.

> “I’ve had some hard ones, like the Classic…. They’ve haunted me. They hurt. I still think about it. But that’s the learning curve bass fishermen have to go through. Part of it is mentally maturing. It’s a hard sport. It’s a lot of thought and decision-making. It’s really a mental game.”

> “The last day I struggled because in the morning I had the worst tide you could have. I told my wife, ‘If other guys are catching them, no worries. From 12:00 to 2:00, I will catch them.”

Back to fishing info

> “Those casts were the most frustrating part of the whole week. I usually can hit a target, but because of the distance away, and because you had to go under things and where my rod had to go, I didn’t have a whole lot of room. It was usually tight where I was at. It was really hard. I’m in good shape, but it was physically hard.”

> “I worked hard not to hit other boats. Treat everyone’s stuff like your own and you won’t have any problems. I went to three marinas and never had an incident with anybody. I made sure I talked to people, said hi, explained what I was doing â€“ I thought that was pretty important.

> “Those were some of the most friendly marina people I’ve ever dealt with. I fished around some million-dollar boats with people in them. That was a big concern of mine, being really careful.”

Even though he used 4 baits, Aaron said he caught most of his fish on a spinnerbait and a jig. Here’s what he used to win (from my notes and BassFan.com), no blackbirds this time:

> “I used a 1/4-oz spinnerbait day 1, where the water was real clear in the back [of the creek]. As I got out of that creek, the water got dingier and bigger â€“ a little more gnarly, a little more rough. So I went to a 3/8ths.

> “The 3/8-oz jig with the Smallie Beaver was a lot easier to pitch and cast, which allowed me to venture further back in the docks.

> “I hardly weighed any on the dropshot, and day 3 caught almost all of them on the jig.

> “The last day I was saving an area I knew would be the best stretch. I started on stuff I’d already fished the last day because I knew the tide was the worst. I threw everything but couldn’t get a bite.

> “Then the tide started getting right, I did make a pass on my good stretch with the 3/8-oz spinnerbait. I lost 3 fish. I was getting frustrated because I lost 14-15 lbs of fish. I wanted to throw a crankbait, but where I was fishing it didn’t seem feasible to throw it. So I picked up the Chatterbait.

> “The tide was still a little high. The picture in my head was the fish could’t see [the spinnerbait] well and weren’t getting enough time to react to the bait. I figured they’d hear the Chatterbait coming and get a better shot at it.

> “I caught a 4-lber on it. Then I knew it was beginning to happen and would be really sweet. It got sweeter and sweeter til the end â€“ about an hour. I left 45 minutes early to be safe.

> “I never used really heavy line. The fish weren’t pulling real hard â€“ a couple did, but the majority were lethargic. Plus lighter line is easier to maneuver in and out of docks, and it casts easier and further.”

Bill Lowen’s 2nd-Place Chesapeake Pattern
Todd Faircloth’s St Clair winning area and baits
To Top
We use cookies to ensure that we give you the best experience on our website. If you continue to use this site we will assume that you are happy with it. Cookie settingsACCEPT
Privacy & Cookies Policy