Last week I took a couple days off to run up to the Niagara River, NY for some smallie fishing. Shindig put on by Niagara Tourism, friends of mine in the biz had been going to for years, told me I should go. I wanted to be there for multiple days but unfortunately could only get there for one. Or should I say fortunately because: 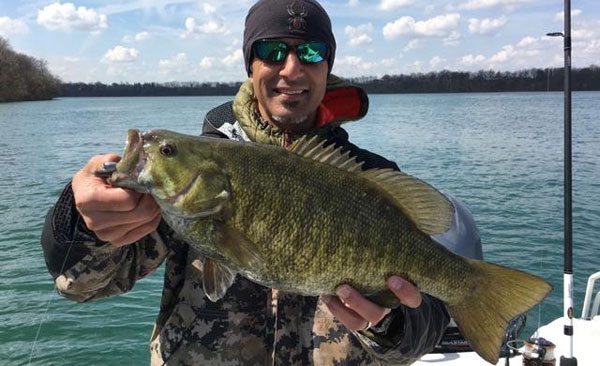 That’s a 4-13 smallie, the biggest I caught. Had a couple more 4+ fish too. Didn’t catch as many as the other guys in the boat, probably cuz I was fishing a slightly bigger bait â€“ a 4″ Strike King Ocho (blue craw) wacky-rigged on a 3/8-oz Strike King Tour Grade Tube Jighead. Weird head choice but I needed to be able to feel the bottom with about 50 yards of 10-lb line out in 20-ish feet of water and that was the only 3/8 jighead on the boat.

Fished the wacky rigged Senko-type bait because a) it’s money when it’s tough, b) surface water temp was 45 degrees so it was tough, and c) no way I was fishing a dang Ned Rig! The guys who were fishing that rig caught more fish, but not as big….

The area was behind spawn-wise â€“ stupid-cold water after it was stupid warm about a month ago had the smallies confused. That doesn’t mean lockjaw since smallmouths never have lockjaw, but it did mean that instead of catching 30 fish a day we were catching less than that.

BUT the fish were big, and it wasn’t like it was one here and one there either. I’d say the average size in our boat (3 guys fishing) was 3 lbs. Stout for sure. And remember, the fishing was “bad!”

Usually the deal is dragging tubes, but it was too cold for that â€“ even a little too cold for jerkbaiting though a day or two of sun and it would’ve been on. Saltwater TV host/madman Mark Davis (not the Elite pro) only fished hardbaits one day and caught ’em so I guess it might’ve been more how you wanted to fish. Me, I kinda like dragging plastics. Reminds me of saltwater fishing on the Jersey shore.

The fishery is great, but so is the fishing area. What I mean: Launch in the river and fish upstream a ways, or fish downstream and in a few miles is Lake Ontario. Or fish Lake Erie.

What’s not to like about choices like that? Nothing too far away, several alternatives, beautiful water (clear and emerald green) and big not-too-intelligent fish. Some guys were catching trout and muskies too, if any of that’s your thing. Bob George of Buck Knives caught a 40-lb muskie next to us on a little Ned-type Rig. Crazy.

Family-wise the area is very cool â€“ I’m taking the Kumar crew up there once school is out. The awesome Niagara Falls is enough for the trip â€“ okay, the falls AND fishing are enough â€“ but the food is good, stuff isn’t too expensive (big!) and the biggest deal for me is the people are great.

Maybe you take good folks for granted because you live with Peter Pan or whatever, but I don’t. Meaning I truly appreciate them. In fact, that’s the reason I went â€“ to see what the people were like. Yeah the fishing too, but if the people weren’t good folks I wouldn’t be writing this.

So gitcha boat in tow â€“ or book you a guide â€“ and head up there for some good times and stupid fishing. If I get back there, will report the fish devastation here.

When you go: be prepared

1. Have a great mapping chip that shows the Canadian border running down the middle of the river â€“ because the Canadians 100% do not want U.S. folks on “their” water. There’s a way to get permission, but my understanding is it’s such a hassle it’s not worth it. And the mounties or whatever they’re called are looking to bust us, so just stay away. Not hard to do, just stay on the U.S. side.

2. The Coasties have a station right where the Niagara River dumps into Lake Ontario. Make sure your boat is ship-shape â€“ all the safety stuff, valid registration, etc.

3. Zebra mussels = cut line…unless you use Seaguar AbrazX Fluorocarbon. I dragged the same rig for hours across the bottom on 10-lb AbrazX and never got cut off. Incredibly I didn’t even have any line abrasion. I was blown away by that line, and that doesn’t happen often.

4. Our host and one of the guides, Frank Campbell of Niagara River Region Charter Service (email him here), gave these tips:

> “Be prepared to use diverse techniques because what works one day [or part of one day] doesn’t work the next.” Smallies are for sure fickle.

> “You have to know where the fish will be relative to the water temperature.” [In other words, they move around so be prepared to find ’em.]

> “You have to realize that this is big water whether you’re in the river with a lot of current or in the lakes. Conditions can change quickly.”

> “The water is very clear so it’s important to use fluorocarbon â€“ not just as a leader, but top to bottom. It has little reflective properties, it sinks and has low stretch.” [He likes Seaguar.]

> The fishing’s supposed to be stupid from mid- to late April til June, but Frank said, “There’s good bass fishing from the prespwan in April til they stop biting in the fall. You can really expect to catch a 4-plus smallmouth.”

> Mark Davis of BigWater Adventures: “I go from Alaska to Panama and fish for everything that swims. I’ve been here the first week of May sinceÂ ’96. It’s on my calendar til I’m dead. It’s a special fishery â€“ they’re here. Last year it was 80 and sunny, and the water temp was 56. The year before that we were pushing ice off the ramp to get in the water. That’s a challenge in itself. You have to adjust, but once you pattern them and figure them out, you can really pound them.”

> The deal for me is I can bring my wife. Fishing, the falls, Fort Niagara (where Paul Bunyan hung out and Babe the blue ox is buried…maybe), and whatever else she wants to do â€“ spa, food, casino â€“ it all works without breaking the dang bank thank goodness. Git more info here at Niagara-USA.com.

WWYD about a camera in your boat?
My chat with Nishi