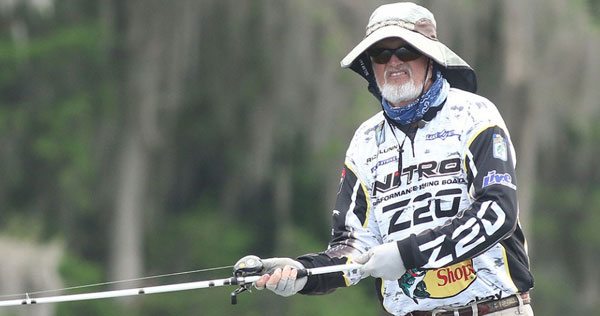 Clunn won! So cool. Not because he’s 69 years old, but because an old lion came out and showed the younger guys in their prime that he could still do it. And since he changed his fishing style to do it, wouldn’t be surprised at all if he’s not done winning yet.

I’ve known Rick for as long as I’ve been in this crazy bassin’ media world. When I was in my media diapers, he was the first famous bass fisherman I wanted to meet. I intro’d myself to him at a Classic weigh-in. He looked at me like I had three heads and he was gonna eat two of ’em. Probably not, but that’s how it looked to me.

I shook his hand, said something and beat feet. lol

Anyhow, I called him after his win, got some pattern/bait deets but also asked him some other questions. As usual, all his answers were interesting. Hope you dig it.

Can you text me a pic of the bait you won with?

Rick: No. I call it the Trickster 2 [he said he won’t produce this bait]. It’s like a Chatterbait with a Luck-E-Strike swimbait [a Luck-E-Swim in sexy shad] on the back. I had it made for me by a local boy.

The Chatterbait is a good concept, but with 65-lb Excel braid, a 7′ 6″ heavy-action Carbonlite rod and swinging in 6-lbers, [a regular bladed jig] would not hold up. I made one with a better hook, better tie-on components and a better tin blade. It had a green rubber skirt [the whole bait rig was colored] green with a dull brown top and a white belly.

The heavy-action rod was key. You had to have the right equipment. If I lost one fish, if I broke one off, I don’t win that tournament. That’s why your equipment is so important. I was set up for these big fish.

I only had one pack of the swimbaits because I wasn’t keying on that for this tournament. Luckily that was enough.

I also caught 4 big fish on a Luck-E-Strike ring worm, black with a blue tail. That’s the same bait Chris used [Lane won with it on the St. Johns in 2014] and that’s the reason I had it. I fished that with a 1/4-oz tungsten weight and a 5/0 Owner hook on 17-lb Excel mono. 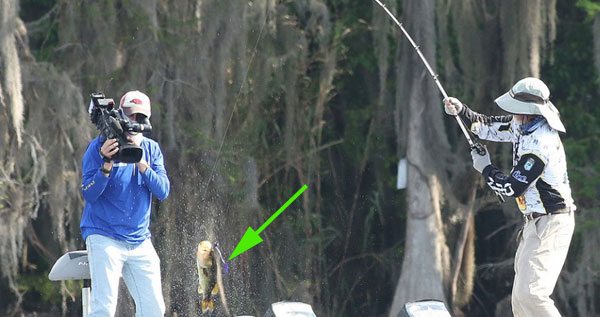 Was the tide important?

You said you’d normally have smaller baits tied on [in Florida] — like what?

In the past it would be 1/4-oz Rat-L-Traps or 1/2-oz ‘Traps, traditional key baits in Florida, like throwing worms all day. But the problem with worms, unless you’re fishing beds, is you’re not getting enough casts to get enough big bites in a day though there are some exceptions.

All these techniques I’ve learned over the years were based on fishing bad [weather] days and tough lakes, but we don’t fish that way anymore. Now it’s good lakes on prime days.

The first two Classics I won I wouldn’t have won with today’s weather formats.

The point I’m making is a lot of my techniques worked well because we fished bad lakes and fished bad weather, but now that’s changed. It’s not the fault of the changes or the bass, it’s me not being willing to make the proper changes.

You’ve said a couple times now that you changed your fishing style — that you’re fishing for 4-lbers instead of 2-lbers. Call me crazy but isn’t that what you used to do [fish for five big bites] to win?

Didn’t you win a Classic when you only got five big bites?

I won that Classic fishing for 2-lbers, I just happened to run into bigger fish.

The style I had was a 30- to 50-bite style. I grew up in the 15-fish limit days, and guided for years when I was trying to get 30 bites for a customer. One out of 12 days you will run into schools of big fish doing that, but I wasn’t targeting them.

I realize I’m taking a bigger chance now. The Open we fished on Table Rock last fall even though I knew I could run into the backs of creeks and get 20 bites a day for 12 lbs, I stayed with topwaters. I was getting 4 to 7 bites a day, and the second day I had just 4 fish. [Rick finished 3rd and had the big bass of the tournament.] That’s really whole thing I’m doing, and it’s psychologically hard for me.

Did this win feel any different to you?

Very different, but mostly from the standpoint that for the first time in my life I didn’t win for me. Most athletes, especially the ones at the top, we are #1. The rest is #2. That changed for me. Now bass fishing is #2 and my family is #1. That’s why it’s so different. It’s more important than any win I’ve ever had because it’s not for me.

Does your age mean anything to you?

It does because I’ve always said that we have a sport that’s unique because you ought to be able to compete at a high level [at an older age], or at least occasionally at as high a level as anybody. This [win] really did confirm what I wanted to prove to myself and others.

Never accept that all your greatest moments are in the past. This was confirmation of that for me and others.

Did you get any surprising congratulations from anyone?

I’ve been waiting for Obama to call, but he hasn’t called yet.

No, the best calls have been from family and really true friends. And I’ve gotten a ton of social media. A writer told me that through social media I’ve gotten more coverage than [he got] in all the events I’ve ever won before combined.

I haven’t won a tournament [in the age of] social media before, and I’m pretty overwhelmed by that part of it.

My 2c about Kevin’s payouts column
WWYD about a camera in your boat?