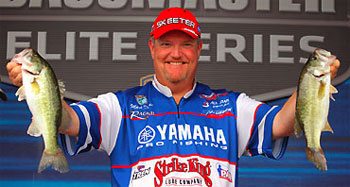 I’ve seen it done. I’ve read about it being done. But I’ve never â€“ not intentionally â€“ done it. Probably because…yes, it’s true, I’m not the best basser in the world. But I also have to stick ’em. In fact, that’s one reason I love to fish for these bassin’ fish.

Let me quote Mark Davis, who incidentally is one of the greatest guys (IMO) at the pro level:

Question: How do you get a bass out from under a boat dock when you skip the Ocho [Strike King Senko] under the dock on 8-pound-test line?

Davis: You donâ€™t have to set the hook really hard when youâ€™re fishing wacky style because youâ€™re leaving your hook exposed. I pull the hook into the bass instead of snap-setting it. Iâ€™ve learned that many times, you can lead the bass out from under the dock. The bass usually wonâ€™t turn the Ocho loose. So, many times before you set the hook, you gently can pull-on that Ocho and get the bass to swim out from under the dock, even before you set the hook.

Many people instinctively set their hooks, and then let the bass do what they want. But Iâ€™ve found that by trying to lead the bass out from under the dock before I set the hook, I usually can catch more bass. If you put a little pressure on that bass when it picks-up that Ocho, the bass will turn its head and swim out the way you want it to come.

Incidentally, in that article Mark is also asked how far he can skip the Ocho under a dock. His answer:

The real trick to skipping the Ocho is that you donâ€™t want it to actually hit the water until itâ€™s really close to the edge of the dock or the tree youâ€™re trying to skip it under. So, once the Ocho hits the water, you want it to skip and bounce back under the dock or the bush. Then you can catch the bass that no-one else is targeting and is one of the reasons I like the Ocho.

By using the skipping type of cast, I can put that lure within the strike zone of the bass most anglers never will be able to reach.

Like I said, I’ve seen it done, read about it, don’t think I’m ever going to do it â€“ and not for a lack of trying.

My patience level being what it is, combined with an overall lack of fishing time, means I’m probably not mastering either the skip or the lead-out anytime soon. Luckily some basses still like to oblige me on the yank-and-crank method.

KVD Likes Red Flake for Clear Water: You?
How Fast Do You Frog?