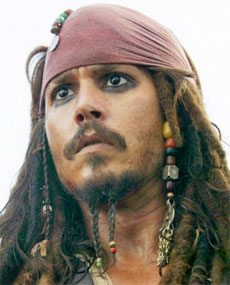 Stumbled across this piece in the Seattle Times about squid fishing â€“ for squid, not with squid â€“ and read this line: “There are a wide array of squid in the sea, and we’re not talking about the ones you see on the National Geographic Channel called the kraken, which are known to have wrecked ships….”

Say wha? Kraken are real? And they’re on cable?

Uh, no, cub reporter. Kraken are not real, and the big squid occasionally captured on film for brief seconds are technically known as: giant squid. But it got me thinking â€“ what is a kraken, meaning what did people think it was?

Checked out the “always reliable” Wikipedia, and ran across the following, written by a Swedish fella in 1781: 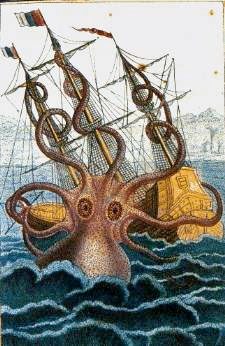 Sounds like the guy was talking about a crab or whale, but here's an old "pic."

Kraken, also called the crab-fish…stays at the sea floor, constantly surrounded by innumerable small fishes, who serve as his food and are fed by him in return: For his meal…lasts no longer than three months, and another three are then needed to digest it. His excrements nurture…an army of lesser fish, and for this reason, fishermen plumb after his resting place.

In other words, Norwegian fishermen often took the risk of trying to fish over kraken â€“ or kraken “excrements” â€“ since the catch was so good.

Hear that fellas? Maybe this is VanDam’s secret….