Sorta how it happened. I’m sure the whole “red in the spring deal” was figured out by several bass-heads across the country. But it really got going nationwide when the “Rayburn red” thing — red Rat-L-Traps at Rayburn in the spring — got outed I guess a few decades ago.

Believe the whole deal started with Bill Lewis, the man who invented and developed Rat-L-Traps. Or maybe it was Bill Lewis, the guys he worked with like plant manager Everett Gill (whose wife’s maiden name was Bass — true story!) and fishermen in the area. So I asked Wes Higgins, the man who runs Bill Lewis Lures now and who knew Bill — because Bill was his granddad. 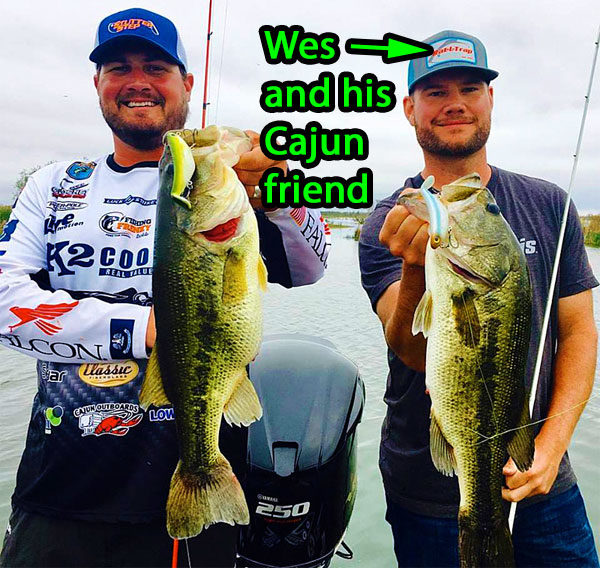 Some info for ya:

> “Everyone called it ‘Rayburn red,’ but in the catalog it’s called ‘red shad.’ I always say the best ones get nicknames….

> “…solid red, a pretty deep red, like a bright true red…has gold on the sides of the back, a black top on the back and the belly is white.”

What do you think is behind the whole spring red thing?

> “…shad colors up til the end of summer into early fall, then phase into pumpkin [brown/orange/gold] colors into the fall. Then as it really gets cold…into that deeper red.

> “There’s all kinds of theories about shad and crawfish and the [red color], and other theories that it’s more of a light thing — the sun giving different types of light as we get into the winter, and the fish might pick up more on those reds.

> “Everyone says it’s all a crawfish thing, but a lot of these baits don’t look like a crawfish. Some aren’t even really that red. And as you get into the season, gold is important too.”

Here’s the “pumpkin seed” color Wes likes in the fall:

Wes conferenced in Everrett, who said that coming up with colors that would fit that old Color-C-Lector — which recommended bait colors for certain water colors/conditions — was one way he and Bill got on red, but ultimately it was just common fishing sense.

> “The lakes down here [LA/TX] are just packed with crawfish. You can go and start throwing [reds] in late February and March, any crawfish color, orange colors — start throwing those colors and you’re gonna catch all kinds of fish. When it gets closer to summer, the crawfish get a little lighter so you won’t get bit as much.”

On the other other hand, red works in other regions and in clear water so…Wes once again things it has something to do with the light that time of year. He also said:

> “A lot of the old-time baits had a red head with a white body. That red and white is a killer combo for reaction strikes.”

Bill Lewis now has about 30 colors of red, crayfish or red/white.

What colors do you fish? Which reds?

> “I go with my confidence colors, the ones I’ve caught them on before. Goldfire craw, pumpkin craw — I throw them before I get onto the reds or if the water is super-clear with grass.

> “Pumpkin craw does better when the crayfish are around a lot of grass — they tend to be more pumpkiny.

> “…red crawfish in stained water…. When the water’s more stained, they eat oranges a little better than the reds. I try to give fish something they haven’t seen before — sometimes that makes a big difference.”

If you can’t find the colors you need on TackleWarehouse.com, believe the Bill Lewis website has ’em all.