Asked the 2019 Elite pros the same thing I asked the MLF/BPT pros — Does it FEEL different? Didn’t get to all the Elites but did get most of ’em. Here you go:

> Bernie Schultz — “It’s a smaller field so there’s more water. Suddenly the lake is more expansive. The feeling’s not different. Still anxious…still losing sleep. When that stops you might as well quit.”

> Mark Menendez — “It’s definitely different. The attitude, the camaraderie, the excitement level are different. This group of fishermen is supremely talented. Only the names have changed.” 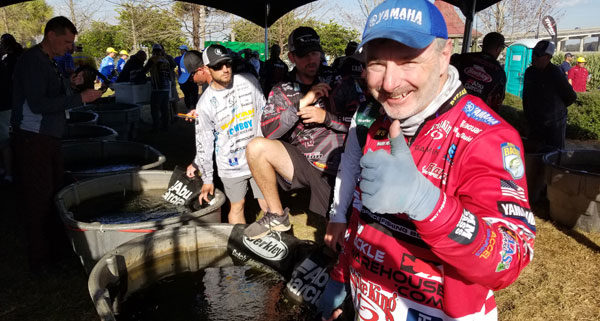 > Cliff Pirch — “I haven’t been this excited in a long time…. It’s a new field and they’re really making an effort to make things better for the fishermen. It’s not as stressful.”

> Matt Herren — “It’s no different. It’s the Bassmaster Elite Series. The odds may be more in your favor in terms of opportunity but you’ve still got to go out and catch ’em. Doesn’t matter about the field size or who’s here.”

> Chris Zaldain — “Absolutely. At the [pre-tournament] meeting normally it’d be like the first day back at school and I’d be looking [around the room at the big-name, longer-term pros]. We have a new group of kids looking at me that way, shaking my hand saying, ‘Thank you, let’s have a great season.’ That doesn’t mean they don’t have talent. In the next couple weeks you’ll know who they are.” 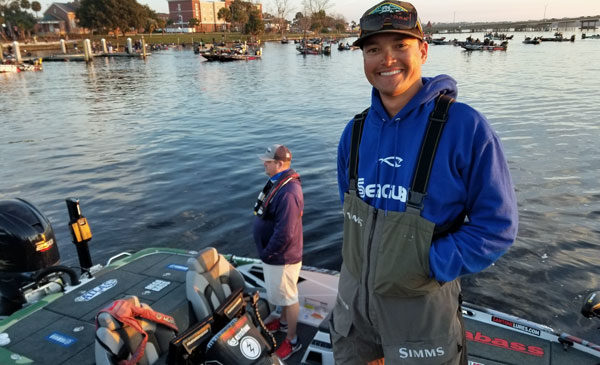 > Cliff Prince — “It’s fishing. It’s kind of strange when you run down the river and don’t see as many guys out there.”

> Keith Combs — “I’ve got my mind on how I’m going to catch fish. It’s felt different up til now, but now it’s gametime.”

> Drew Benton — “Absolutely. We have something to prove as a group and organization. But we still have to go get the 5 biggest.”

> Brandon Lester — “Nope. It looks different but it doesn’t feel any different.”

> Rick Clunn — “No. It’s just a tournament. You have to go out there, get current and let things naturally unfold.”

> Yusuke Miyazaki –“It feels really good. I really want to fish here. The Elite Series is elite still. You still have to catch them.”

> Jason Williamson — “Today I’m more relaxed [than prior years]. The whole atmosphere, from the meeting to the takeoff, is more relaxed. It’s not so tense.”

> Micah Frazier — “It’s definitely a lot different…less boats and we’re missing a lot of guys you’re used to seeing. I think it’ll be good…changes we’ve already seen come to the sport are good.”

> John Crews — “The biggest difference was the fishing. It’s never fished like this before. To me it’s thrown the whole week off.”

> Steve Kennedy — “It’s different. At the campground there’s a lot of new faces.”

> Kelley Jaye — “I was a little nervous this morning…not as comfortable. With a new field you don’t know what to expect. The past couple years I wasn’t nervous at all.”

> Brian Snowden — “It did feel different…excitement, but I also grew up fishing with a lot of guys who are no longer here. But if felt good…electric atmosphere.”

> Brandon Card — “It definitely feels different. …nerves just as much as previous years, but it’s a smaller field…didn’t see as many guys in practice. Not having Kevin VanDam here is just weird. But it’s cool I’m getting to fish with some of the guys I looked up to, like Jay Yelas. He’s my angling hero.”

> Paul Mueller — “No because at the end of the day you have to catch fish. So when you have a tough practice it feels about the same. Different [field] but these guys can catch ’em.”

> Carl Jocumsen — “It’s awesome. I’ve dreamt about being here since was 14 yrs old. There’s no better feeling for me.”

> Hunter Shryock — “Seemed like a normal tournament day. I thought it would be weird to look around and not see [former Elites]. It was more weird in the meeting than when fishing.”

> Chris Groh — “It felt great. It feels right. The vibe was good — it felt positive.”

> Jesse Tacoronte — “I felt alive again [he’s back after surgeries]. lt was invigorating to pull up to the ramp and see all the guys. The names don’t matter to me — there’s still a bunch of sticks out here fishing.”

> Koby Kreiger — “It felt fantastic to be back. I just enjoy fishing the tour…glad to be back.”

> Skylar Hamilton — “It felt different. It wasn’t near as nerve-wracking. It could be that this is my 3rd year or the new group.”

> Jamie Hartman — “I had a lot of excitement, adrenaline, 15 mins before takeoff. But I knew it would be a grind. I get excited when I’m on them and don’t when I’m not.”

> Stetson Blaylock — “Everything about it was different, for the good. More low-key. Everybody’s fired up about it which is a good thing. Changes have been made for the positive. It’s exciting, a fresh start for me.”

> Chad Morgenthaler — “It was a good feeling knowing…smaller field size here. It was an unsettling feeling not knowing exactly what the competition was…so many new guys. o I didn’t know how hard to push some of my areas today.” 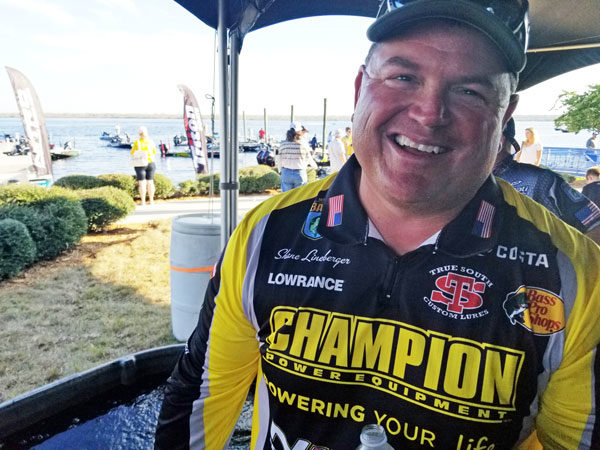 > Clent Davis — “I never saw another boat today — which might have been a bad thing.”

> Todd Auten — “It felt great to be here. I haven’t been this excited in a while in tournaments. Getting back in the Elites is kind of a big deal to me. I had more butterflies this morning than in a while. ”

> Caleb Sumrall — “It’s exciting man. I’m really excited and anxious to get out there. Being in the Elite Series…the blastoff is one of a kind.”

> Robbie Latuso — “It was awesome. Everybody had positive vibes going, everybody’s excited. I’m excited every tournament I go to.”

> Brett Preuett — “I’m more at peace than ever been before. I’m glad to be back at Bassmaster. I’m more comfortable, at home.”

> Kyle Monti — “I was super-excited. It’s a big year for us. As Elite anglers. we have a lot to look forward to the next couple seasons.”

> Jake Whitaker — “There’s a lot of excitement. I’m anxious to get out there and get the season started. I’ve fished against a lot of people…this group here is a little intimidating because you don’t know who they are. Intimidating but exciting and fun.”

> Bill Weidler — “It’s different being that I fished the Elites last year and it’s a new field this year. I’m excited to compete against new guys. I’m hoping we make a statement and show the world what we really are…a lot of anticipation for sure.”

> Ray Hanselman — “I was ready…chomping at the bit. I’m glad to be fishing with the Elites.”

> Tyler Carriere — “It felt good man…the atmosphere this year. We used to have little goups, everyone talking to each other” [but not anymore].

> Clark Wendlandt — “I’ve been wanting to [be on the Elites] for a long time. For 1 reason or another it didn’t work out ]but] I’ve always wanted to. it’s extremely exciting. These new faces know just as much as anyone and are hungry, and that [hunger] gets you a long way.”

> Matt Arey — “I’m anxious because being an FLW transplant I want to make sure I do everything right.”

> Lee Livesay — “It was awesome, a great time. Competing on the world’s biggest stage, starting off a career — amazing to be part of it.”

> Greg Dipalma — “It’s a dream come true. I’ve been trying to get here for 12 years and it finally happened.”

> Luke Palmer — “It’s a lot of fun…wished for my whole life and now I’m finally here.”

> Harvey Horne — “It’s something I’ve worked for for a long time…incredible experience.”

> Mike Huff — “It’s awesome, a dream come true. I get to fish behind some of my heroes.”

> Derek Hudnall — “Emotional…dreaming to do something for your whole life, you get here and it happens.”

> Ed Loughran — “I’ve been fishing tournaments for 36 yrs, since I was 12. I’ve been dreaming about this a long time, and it’s amazing to finally make it and catch a few.”

> Patrick Walters — “A sense of belonging. It just felt natural. Didn’t feel out of place. I’m living the dream making the Elites, doing what I love.”

> Cory Johnston — “Awesome. A great feeling. I’ve dreamed my whole life to be on the Bassmaster Elite Series, so to get her going this morning was pretty cool.”

> Gary Clouse — “It felt good. I wasn’t really that nervous. We have 8 tournaments to make the Classic. I’m ready to get going.”

> Garrett Paquette — “It feels like a long time coming. All the sacrifice my family and friends made…finally worth it. It’s underway.”

> Quentin Cappo — “It’s gametime. Seemed like everybody was just ready.”

> Frank Talley — “It was awesome…surreal because I’m fishing against a lot of guys I’ve looked up to growing up. Rick Clunn, Jay Yelas…. Excited and honored to be competing against them.”

> Chris Johnston — “…the blood flowing listening to music, thinking about the day…jitters. But as soon as I hit the throttle, it’s just another tournament.”

> Brad Whatley — “I’m amped up, ready to go. I’ve wanted to do this all my life. It’s my first time, but after takeoff it’s just another tournament.”

> Scott Canterbury — “It felt good. I’m ready to fish. Excited for sure.”

> Rob Digh — “It felt good. Getting out in the sunshine and fishing the Bassmaster Elite Series is a good thing.”