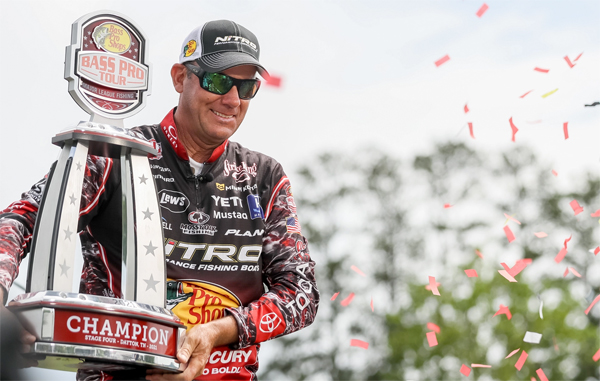 Kevin fished the Chick 3 times pervious: a ’91 B.A.S.S. Megabucks where he finished 10th, a 2014 Elite at the same time of year where he finished 2nd (Jacob Wheeler won) and a BPT 2 years ago in April where he finished 65th. So not a ton of familiarity, but he felt like he knew what to do (fish offshore), and hey – he’s KVD! Deets:

The BPTers basically have 2 days of practice:

> “I spent all my time fishing that way [cranking ledges], and really only found a handful of spots. I found a couple spots that had good schools for sure, a handful that I got a bite or 2 on but you just don’t really know what you’ve got…don’t want to stay too long or get seen. Just seeing how many people were graphing ledges the whole time, I was pretty concerned….

> “I was committed [to ledges] but was pretty unsure about what I’d found and what my chances would be to do good – I really didn’t know. Having something to yourself is rare anymore, and I didn’t. Other people were fishing some of the same stuff.”

Kevin was in Group B to start, meaning they fished the day after Group A:

> “Not only do you have to worry about other competitors, but probably lots of other tournaments – club tournaments, local guys, a lot of them know the key stuff too. There’s so many big tournaments there, there’s very few secrets anymore. To try to find something [good that folks don’t know about] is kind of challenge.

> “I wasn’t sure if I’d be able to get on any of the spots I knew a school of fish was on. I just told myself, I’ll just run until I can get to an open spot hopefully. So I ran to this spot I felt the best about, and I was the first one there….

> “I didn’t catch much [at] first…few other places I got into them. Last period I figured as hot it was they would pull a little bit of water and that’s how it turned out [his bite turned on].

> “Edwin was leading and I think I was in 2nd, but the elimination line was like 14 lbs and I had 57 so I knew I was good to at least make it to the Knockout Round.”

> Day 2 for him: “I basically used that day as a practice day, trying to find another school or find some more places – basically spent it looking at areas I didn’t get a lot of time on in practice or thought looked good and I never got to. I found 1 spot with a few fish on it and a couple places I thought could maybe get a bite.”

> Knockout Round: “…changed my rotation up based on what I’d seen…. The fish were scattered in the mornings so I went to a couple different areas early. At first I basically was keeping pace – a couple guys were catching them pretty good and I was running pretty close on ScoreTracker. I knew if I just kept hitting different places [he’d catch ’em].

> “I fished everything I knew that day…steadily caught ’em and kept on top of the leaderboard most of the day. I ended up winning it but I didn’t really try to, it just worked out that way. …when the water turned on [in the afternoon] and the fish started to bite good, I thought any number of guys could’ve caught me. You can’t win if you’re not in the Championship Round so I didn’t want to make that mistake.”

> Championship Round: “…same strategy, trying to time it out, fish the conditions based on the day we had. I knew that really the 3rd period I’d get into them with the water generation…get a flurry going…keep those fish fired up and maximize that opportunity….

> “…back and forth all day long. I knew it would be that way with the field we had – Neal, Wheeler, 4-5 guys have a lot of experience there on Chickamauga and several really experienced ledge fishermen. I didn’t have fresh spots to go to so I had to maximize everything I’d been fishing.”

> “…a lot of different rods [laid out] with lot of different baits…to figure out what the magic was to get them to react on that given day. But I caught 95% of all bass I weighed on a crankbait. That’s what I have confidence in, and it’s great tool to find ’em and trigger them to bite.”

> “…whole plethora of Strike King crankbaits, a couple rigged with different sizes of line just to make sure I had the right combination for the exact depth of the spot I was fishing. The Series 5, 5XD and 6XD – the 5 and 5XD were my best…between 5′ and 14′ is where I did most of my damage.

> “…blue gizzard and green gizzard shad colors are pretty natural – even in that stained water, that’s what the real ones look like and they don’t have any problem eating those. …I didn’t have a lot of success throwing bright colors – chartreuse and stuff like that – in practice. They didn’t want to bite it compared to something natural.”

> “The BB1 Pro has a bigger spool…for 17-lb fluoro you can fill it up and make super-long cast and not lose many inches per turn…doesn’t hurt your [retrieve] ratio.”

> “I change the hooks out to Mustad KVDs – upsize them. …the standard one, the original one…extra-short, super wide gap. If a bait comes with 4s from the factory, you can put 2s on there…can upsize.

> “I was fishing the bait fast to get the fish to react to it…typically lose some, but I [landed] many with just 1 hook.” 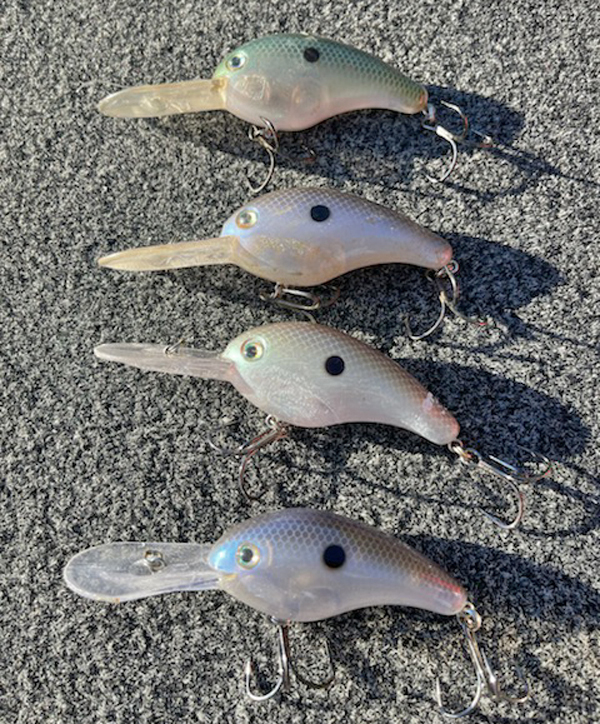 How he fished ’em

> “Mornings [no water pulled/current] and it was cloudy and rainy some. I kind of just fished around, hoping to run into 1 here and there. They were real scattered, still chasing shad…weren’t set up on the classic structure, they were out on a flat roaming around. They definitely move around when there’s no current.

> “…different every day…fish either across the current or with the current…. A lot of times I had to change angles, even 180 degrees, to get them to react. A school I ran into on the last day, the last period – I saw fish on the Mega 360…could not get them to bite from one angle, so I switched to the other side and caught them every dang cast.” 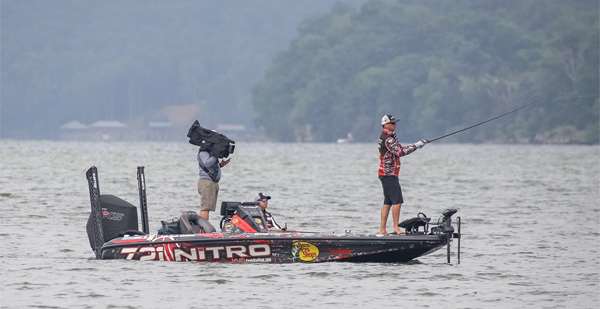 > “In practice I spent lots of time Side Imaging…Lakemaster mapping and Side Imaging were a big deal in practice.

> “I focused a lot on trying to find shallower ledges. But those fish don’t allow you to graph ’em. I found a really good school in practice, in 10′ of water. I tried to Side Image them…and they were gone. I tried to go over the top of them [same].

> “They’re so pressured there. If they’re pulling water or the fish are 20′ deep, yes absolutely [you can graph ’em]. But those shallow ones will scatter and not let you do that.

> “During competition it was all about the Mega 360. This was the first tournament I’ve fished on the TN River system with it and you can see everything…can follow the ledges and stay well off them. It’s really a big deal.

> “Without a doubt the Lakemaster mapping always has been and still is the most important tool I use. It shows how everything lays out…shows you every corner, turn, ditch mouth, even a lot of subtle stuff is on there. …gives you the big picture – what surrounds you, understanding how fish migrate in and out of places and to the ledges. It’s just an unbelievable tool.

> “I run my HydroWave all the time ledge-fishing with the Offshore Schooling pattern on a 1-minute delay. It helps get the school triggered and helps keep ’em fired longer too. That sound of other bass feeding keeps them going.”

> “When I was around an area, [locals/spectators] let me do my thing, especially into the tournament when I got a little bit of a lead. I saw a lot of top-notch sportsmanship. I didn’t have anyone fishing around me during competition hours. That’s not normal [and he appreciated it].”

ALL the baits from the 2021 Bassmaster Classic!
How Jacob Wheeler won the St Lawrence Bass Pro Tour event