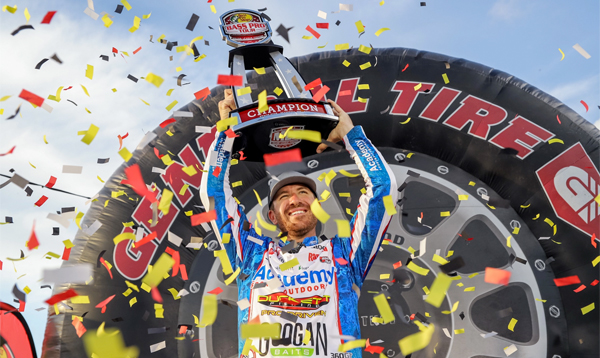 Jacob Wheeler won another dang tournament! 🤯 Amazing for many reasons – 2 of ’em being the tough format (going back to zero) and no real spot or technique secrets at the St Lawrence. But he won another one, his 4th Bass Pro Tour win. How it went down:

> “It was all about strategy. I started my practice…2 different ways I looked at it: stay close or go further away than anyone else….

> “…up close wasn’t what I thought it should be…packed my stuff up, drove 70 miles south….

> “…when smallmouth are in transition, it can be difficult to get numbers of bites. I wanted the biggest population of bass doing one thing.

> “The 2nd thing strategy-wise I was doing was looking a little deeper. It was the opening of bass fishing season up there in NY…tons of boats fishing…up there from PA, NY, traveled up there for vacation and rightfully so, it’s an unbelievable fishery.

> “…not just understanding competitors, you had to understand [lots of] areas getting more pressure. In areas that got the most pressure, it wasn’t easy to catch those fish [even though] smallmouth tend to be really aggressive on the bed.

> “Really quick I realized that wasn’t the way to go. I wanted the ones that weren’t messed with, so I started looking a little deeper. …big giant flats – you had to troll for miles to find the areas where they were congregated. A ton of dead water….

> “[When he found them that meant] I could manage my own fish. That was key. If you find community schools, you can never get on ’em. It’s tough to fish for those fish. I’d rather have 2 sneaky schools no one else has found that I can manage myself….

> “I found fish spawning on sand, on rock, on more-gravelly areas. …go for miles on lot of major flats…maybe 1-2 spawning here or there. But when you found the perfect scenario, with enough current for those fish….

> “Smallmouths do the same thing as largemouths: The spawn starts in creeks and flat areas in places with no current, then they transition toward the main river or main lake. That’s exactly what was happening [at the St Lawrence].”

> “…I started off the week pretty good…breaking the [opening round weight] record…about a 3.5-lb around average. But I knew I burned that area.

> “The key was finding more fresh fish to go after. That was my goal…once the pressure got to them, it was all about finding fresh ones in new areas.”

He said most people – including the vacationers – were fishing for spawners in 4-8′ because those fish were easy to see visually. But he was looking in 10-15′:

> “…when you’re in current, electronics can only show you so much. Smallmouths are…so tight to the bottom, forward-facing sonar can’t really show you anything. It’s way more efficient to utilize your own eyes….

> “After I won my round and got an automatic bid to the Championship Round, I knew I needed to go find new ones for the final day. …had about 3 hours [to look around]. The wind was blowing really bad that day, so I had a decision to make: Go and practice in the calmer areas I knew were protected, or do something a little different…go in the wind.

> “…practice in the wind, I didn’t think the other competitors were going to find those fish…spent 2-3 hours getting beat in the head with the Flogger, finding new ones. I think I found 25 in 2.5 hours of looking. 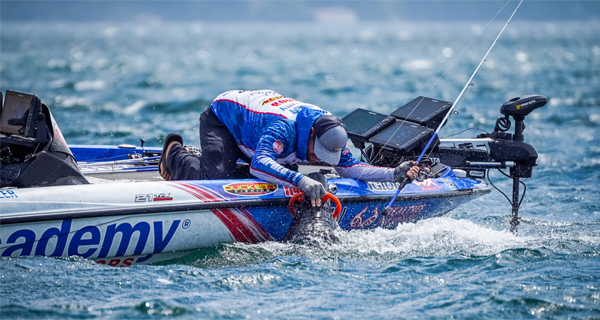 He fished on the bottom with Ned rigs, dropshots and VMC Tokyo Rigs. Said he had 2 of each on deck:

> 12-lb leader: “I was getting fish in a lot quicker than most – getting their head up – [by] beefing up my leader.

> “…dropshot had a way-better hookup ratio. But sometimes they would go down and bite my weight, and that’s when I knew [to change to the Ned].

> Tokyo Rigs: VMC Tokyo Rig with a 3/4-oz VMC Cylinder Weight to get it down fast. “I started off using the Finesse Neko Tokyo Rig setup, then ended up swapping to the 3/0 wide gap [regular Tokyo Rig]. The fish would go down on the bait, nip it, and get it under their chin – I would foul-hook them. But with the TX rig I would never get them til they got the bait.” 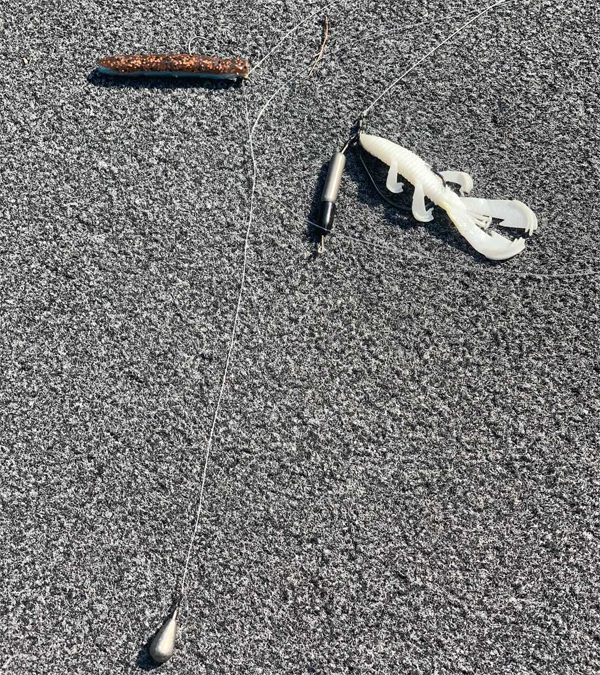 > “The biggest thing for me is my family and my wife. She’s the rock. She takes care of my little one, she’s everything. She does a phenomenal job at home, and that helps me just focus on my job…sponsors, how big a player they are for letting me do what I do, but ever since I met her, everything clicked.”