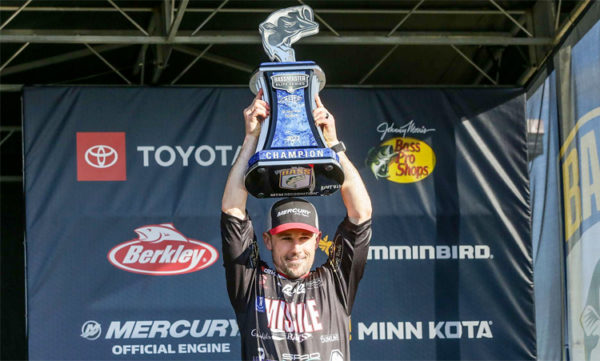 John Crews likes the St Johns River and it likes him: He finished 2nd there in 2020 and 5th in 2019. So it wasn’t really a surprise he won this one, for his 2nd Elite win. Here’s how the mater bait designer did it:

> “I didn’t want to practice anything I’d fished much before, so the 1st day I practiced way south and had 2 small bites. I was looking for the motherlode of staging fish because I didn’t think there would be a huge spawning wave. …just didn’t work. I figured it would work or wouldn’t work, and it didn’t.

> “The 2nd day I was torn between going to Rodman or Crescent. I decided to go to Rodman, which was a good call because I caught ’em pretty good. I figured out the patterns and locations for what I did the 1st day of the tournament. I had maybe 18-19 lbs.

> “I was fishing deeper – I figured with the cooler nights, a lot of those fish would pull back out. In Rodman a lot of fish live in 5-10′, and when it gets cold I figured the fish would push out even deeper. I think that’s exactly what happened.

> “The 3rd day I went back to Rodman and tried to expand and get some other stuff going, but it was tough. I probably had 8-9 lbs.”

> “The first day of the tournament I caught 26 lbs or so on a dropshot fishing deeper [in Rodman], and then I ended up culling one on the river – like a 4.5-lber. That’s what gave me 28 lbs.

> “The 2nd day I went and caught some on Rodman, but I felt like it was going away – that deeper bite. I wasn’t seeing as many fish on LiveScope as I did before. Those fish were not random. The deeper ones were around certain types of cover…isolated. I wasn’t seeing those fish in those trees like I saw in practice and the 1st day of the tournament.

> “So I ended up catching 3 of the 5 back on the river. That’s what kind of saved my bacon the 2nd day, to where I could stay in the lead.

> “The 3rd day the river was sucking so I went up to Rodman. It was sucking deep, so I went to a shallow area where I’d caught some small ones late the last day of practice.

> “I went in there – my first flip was with the [Missile Baits] Quiver and I caught a 5-lber. …filled up my limit, culled a couple times…. I knew it wouldn’t be the deal, but at least it gave me a limit [around 13 lbs]….

> “Day 4 I knew we were getting different weather [rain, clouds, wind]. We had sunny and calm in the tournament up to that point. I went out on the river – with the rainy conditions I felt like they’d be biting a little better and they were.

> “The first 2 hours I ended up catching about 12 lbs. I felt pretty decent about it, but I was headed to Rodman. I made one stop real quick right before the lock and caught one about 4.75 and then started feeling really good.

> “I went on up to Rodman and nothing was working deep. I ended up going shallow…nothing over there either. So I went back towards the lock and stopped again because we were having some wind and rain. I picked up a spinnerbait and caught a 2.75 and culled 2-lber…. 5 minutes later the rain was done and it was sunny and slick for the rest of the day. What I caught the last day, all of them were on the river…pads.”

> “I had like 3 stretches of lily pads [in 2-3′] I was fishing – long stretches. I didn’t know where they were going to be, I just covered water. I think they live in those pads on the St Johns – they’ve always lived in there, even when they had eelgrass [in the river]. Now with no eelgrass all they don’t have anything else to live in.

> “I had 5-6 deeper places – they were all related to the creek channel or river channel, anywhere from 12′ to 25′. If you could find one of those isolated trees that had fallen over right along the channel, that seemed to be the key.”

> “I was throwing a Zoom Fluke (watermelon red), my limit-getter [around] I call them ‘shallow flat pads’ – the pads that lay flat on the water – and pad stems. That’s where they spawn. I could see old beds but no fish on them. Smaller fish were up on there cruising around.” 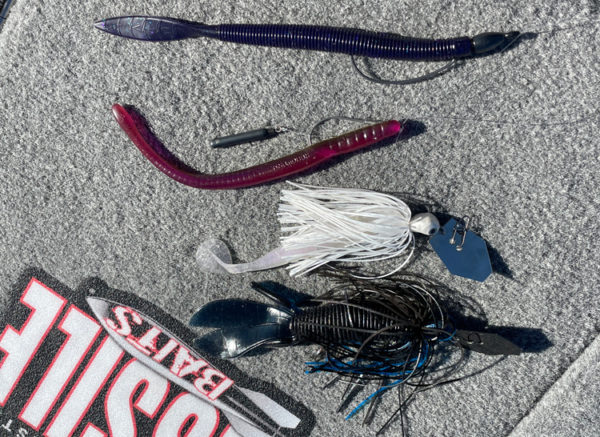 > Electronics – “I utilized everything, all 3 brands. LiveScope definitely played a factor for the deeper bite on Rodman.”

> Shout-out – “There’s a ton of people I would like to thank but it was really cool to have my dad there with me when I won.”