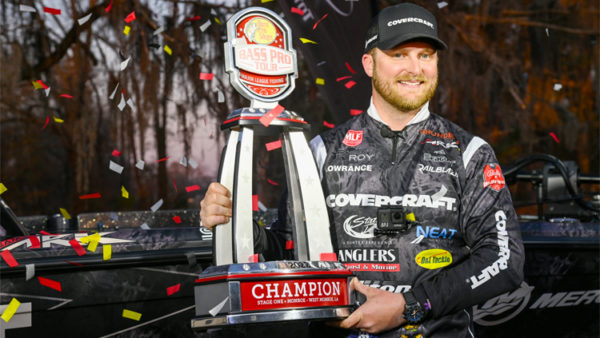 Not only did Bradley Roy win a tourney on 3 different lakes, he did it when the water temp was in the HIGH 40s…in Louisiana!! Props to him on his first Bass Pro Tour win – was a tough one!

Going into it and practice

> “Really when they do the 3 different lakes in 1 tournament and it being the start of the year, the first goal is just survival. D’Arbonne wasn’t a place I was familiar with, or any of them. My main goal was just to simply get through D’Arbonne…getting paid and have good points.

> “Before I could think about winning the tournament, I had to survive D’Arbonne. That’s all my focus was initially. As the tournament progressed, then my focused switched to Caney and Bussey Brake.

> “I went down and scouted D’Arbonne but didn’t look at the other 2. …kinda knew what was available to fish as far as cover. I knew the water temperature was going to be cold – really crappy weather. So my mindset was just to get around some fish…basically got in areas where I knew bass had been a month ago….”

> “At D’Arbonne I weighed pretty much every fish from the back section of a creek – one of the bigger creeks on that lake. The back of it had a lot of really good spawning cover around the banks, but out in the middle 3-4 ditches came through this flat scattered with cypress trees. They had 3-5′ of water on them, and the best ones had about 4′ on them. It seemed like a good place for those bass to hold while wintering or waiting to move up….

> “…had to let it rest at certain times, then you’d go back through and get a bite.

> “I was just basically pitching at ’em. I’d gotten bites on a jig in practice and on some other things, but it seemed like the really consistent way to get a bite was simply a Trick Worm. I’ve done it in FL before, when the water is cold and the fish are real lethargic. [Water T was high 40s at D’Arbonne.]

> “…pitch it in there – I was trying to spend as much time with it next to the trees as I could. But the majority of bites came on the fall. It wasn’t as much trying to trick one into biting, it was just one would get set up in the way it needed to on those trees and when I came by…they’d usually bite it real quick.

> “…the forward-facing sonar [in his case Lowrance ActiveTarget], you know that stuff is good in deep water. I was fishing [shallow], those little ditches that came out of that flat were super key. I got bit on trees that weren’t around [a ditch but]…could tell [with ActiveTarget] before I got to a tree if it right on the edge of the ditch…could make a more high-percentage cast.

> “…blew me away. I was literally looking down almost as much as a dropshot tournament.” 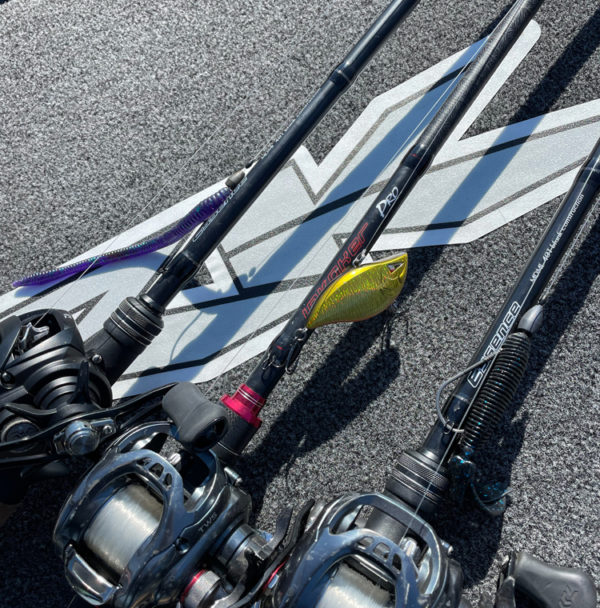 > “It’s a completely different lake than D’Arbonne – some deep structure and grass. My plan that day was to fish a jerkbait, a dropshot…and I spent a good bit of the 1st period doing that. I caught some non-scorables, then the wind started blowing from the south. [Water temp was 50-51.]

> “…couple banks I knew had some grass, so I jumped up on that grassline with a 1/2-oz gold lipless. I got a 3-10 and knew if I got another one to bite it would tell me something I could do. Then I caught a 5-lber and started running that.

> “I was using ActiveTarget the same way. Seemed to me you had to keep the bait coming right off the break of that grass. The water was 4-7′ deep and the grass was about halfway up. It definitely did seem to help if you were at least ticking the grass.”

> “…4-hour ride-around, and it was obviously right away it was gonna be a flipping and pitching lake. A lot of flooded trees and bushes at various depths – I rigged a lot of flipping stuff up…I feel like I can be dangerous doing that.

> “A lot of that lake was kind of the same depth and we didn’t have a lot of mapping because it’s pretty much a brand new lake. I found one area with a little ridge – it was a little shallower. Most of the lake was 8-10′ and this was around 4′. It had a variety of stumps, bushes and trees with scattered grass mixed in. It was a good area to start…it ended up being where I spent the entire day.”

> “I normally [would flip that stuff with Seaguar AbrazX fluoro] but new for Seaguar this year is 22-lb Tatsu [and 17-lb]. I used it the week before and it seemed like really good line – a little stronger than 20 but not quite 25. I felt like it was in the sweet spot.”