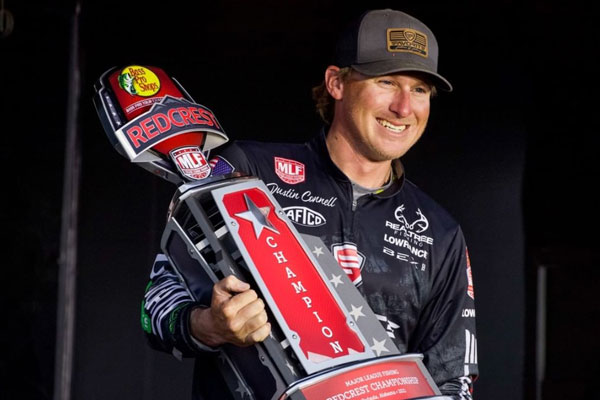 Dustin was prepared to win this tournament – but he didn’t know that til he was in the knockout round. How was he prepared? The fun-fishing he’d done all winter, jerkbaiting for spotted bass around brush. At Eufaula, AL it was for largemouths, but they wanted to eat the same way. Here’s how it went down.

> “…changed the tournament site and all that, it was very short notice – like 2 days. I had to go out and re-rig rods and get ready. Even though I live 2 hours from Lake Eufaula, I don’t consider it one of my home lakes. I was a little more nervous about it than Palestine. Palestine…no expectations, but Eufaula…know what it’s going to take.

> “…1 day of practice. I knew from the weather we’d just had a big cold snap and no warming trend was happening before we got there. I knew a wintertime hard pre-spawn deal would be going on for at least the first couple days of the tournament.

> “I decided to idle all day just looking for a school of fish, a hard place that had ’em or brushpiles. I idled in dirty mud, clear water…found a ton of brushpiles.

> “I wish I fished more in practice – I feel like I would’ve been more dialed in. [He fished a little and] had a couple spinnerbait bites in 8′. My plan was to start fishing with a spinnerbait.”

> “Day 1 of the tournament I started with a spinnerbait…fish it the first 2-4 hours and see if what I found was actually good or not.

> “I had full intentions of fishing offshore brush – the water was dirty and also cold. I caught 2 and then it went stagnant. The last 30 minutes of that day I caught 3 swimming a jig shallow around grass. Later in the day the water started warming….

> “I stuck with that gameplan because I wanted to fully eliminate it [or] try to find a collision with an area they were pulling up, but I never found that. I was fortunate to make the cut in 19th place to get into the knockout round.

> “Day 3 I knew I needed to make a big change. The water had started clearing, and I knew I would go down in flames doing what I had been doing…. The first part of that morning I started fishing the same way, then I finally said, ‘I’m done with this.’ That’s when it started evolving for me.

> “I ran down the lake – the water had cleaned up. I panned over to brushpiles, caught 1 on a jig, reeled it up and saw 2-3 more in there. I had a jerkbait in the box and was like, Let’s see if they bite it. I caught one and said, ‘Okay.’

> “I ran to the next [brushpile] and caught 3, 1 was almost a 4-lber. I said, ‘Okay this has gotta be the deal,’ so I stuck it in my hand the rest of the day. I finished the knockout round in like 2nd. After I was pretty sure I was in, I had 45 minutes left so I went idling, looking for more brush….

> “Day 4 was championship day. I knew where I was going and was committed to doing it. I’d marked a bunch of places with good water color in a good area, but I didn’t know how good. All in the same area….

> “I had a really good rotation. I stayed in the same half-mile stretch, 15-20 places. The brushpiles I was fishing were in 5-10′, fairly shallow, most were in 6-8′. The key to it was they had to be connected to the bank. What that means is they couldn’t be on a hump in the middle of a bay, or a long running flat way out. They wanted to be near that bank because they were staging up to spawn.

> “…fish were coming up from the main lake…stop on brushpiles. Every one of them would reload every hour. I caught every fish except 1 on a jerkbait.”

> “I was using that [Lowrance] Active Target. I could pull up to a brushpile in 5-8′ and could see if there was fish on it or not…saving time for me. If I pull up and pan over there, and don’t see any on it or around it, I’ll make 1 cast just to make sure, then leave.

> “The 2nd advantage was being able to trigger them to bite. The water was so clear, they didn’t want to bite a jig…had to really make them bite. I’d throw the bait out there, reel it down, see them follow it, pause it, snap it a couple times – the fish would get fired up and eventually get it.

> “Without [Active Target] I’d be hung in the brush [and pulling his bait away from fish]…just way more accurate with it.

> “I was fishing those brushpiles so slow and meticulous. You had to be so careful…pulling up to these places…if you got too close they wouldn’t bite. You stay way out, make really good casts and try not to get hung. You had to concentrate a lot. That really paid off.”

> Jerkbait: Unnamed deep jerkbait (crystal shad) with #4 Owner ST36 trebles. “The main reason I was throwing that bait, a deeper version, was because it has a little bigger body so I could throw #4-size hooks on it. I don’t like throwing #6s – it’s hard to keep fish on those smaller hooks.”

> 6′ 6″ M Favorite Rush Rod – “The main reason I used a little shorter rod is it’s a lot easier to cast in close quarters…. The biggest advantage with that short rod…not using a 7′ rod…I could look at the bait with the unit…rod not slapping the water [when jerking]. 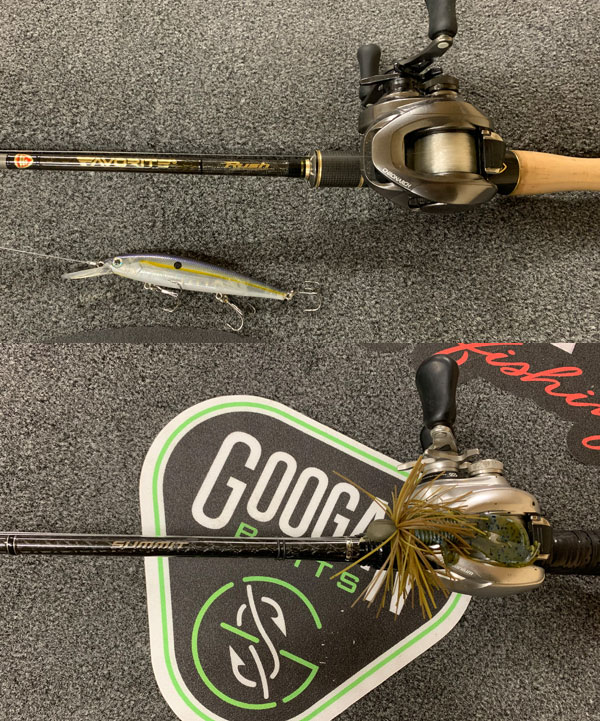 > Active Target: “I spent a pretty good bit of time with it. As soon as I got it, I spent 2 straight weeks on the water…on Lake Jordan…getting the settings right, the angle of the transducer right, getting comfortable seeing [stuff]. It didn’t take long to dial it in. I felt really comfortable using it.”