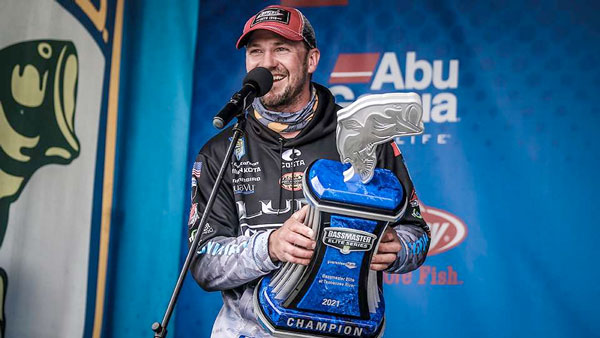 If you had to fish a tourney in cold water/tough conditions where you could fish for 14″ minimum size fish or 18″ minimum size fish, what would you do? Yep – that’s not what Gussy did though! Here’s how he ran away with this tourney (he led every day) to win his first blue trophy.

> “Wednesday night if you would’ve said, ‘I’ll give you 2-3 bass a day so you’ll get 50th and the last 10-grand check and some decent points,’ you could have signed me up for that. I had a horrible practice.

> “I caught 2-3 smallmouths, and found that little area where I caught all my fish Wednesday afternoon. I caught a 15-, 16- and 17-incher [the min size for smallies there is 18″]. But when I hooked one I saw others following, so I knew more fish were there – but I didn’t know if I’d be able to get a keeper.”

> “I pulled in there the 1st morning, and as fast as I put my bait down I was catching them I caught like 15 in the 1st hour with 3 big solid keepers.

> “I had another stretch where I’d marked a couple, so I was thinking I could actually get a limit of big smallmouths. I dropped down and put 1 in the livewell, dropped down and hooked 1 but lost it. I fixed my bait, dropped down again and caught another keeper. Then I just sort of floated away from that place….

> “That second place [Tellico side of the channel] is where I ended up catching most of my fish from.

> “After day 1, I thought, Did I get lucky today or is that that good of a place? I still wasn’t sure. But the 2nd day I went back and started putting it together again. Then I knew I had a good chance to win the tournament.

> “Day 3 it went really well. I learned that first thing in the morning was pretty critical for getting a couple of good fish. Then it got a lot more grindy during the day. I could catch more keepers, but I wasn’t getting flurries.

> “I didn’t have a lot of stress. I was really just having fun through the event up to that point. Then day 4 it was getting real. I knew I was going to be losing part of that morning [fog delay] and had some anxiety there, but once we took off – once we got going, away from the dock and all the people and all the questions – it was fun. We pulled up and had to work for it a little bit but got ‘er done. It was awesome.”

> “The 1st place where I caught them [day 1], a channel swung in tight to the bank on the Loudon side. …series of points…if you look at the map it’s obvious where you’d try first.

> “[His main spot was] sort of the same deal…when I drove over it, on Side Imaging it was evident. It was bigger-looking rock, maybe part of an old roadbed. I wish I had time to drop my Aqua-Vu down there….
https://www.tacklewarehouse.com/Aqua-Vu_Camera/catpage-AQUAVUC.html?from=bblst

> “I thought the bites were kind of random at first. But as the tourney progressed…if I drifted over [marks] perfectly I’d get a bite. If I missed…it was like a ghost town – kind of crazy.

> “It was challenging because there was a lot of current there, a lot more than what you’d think. The current was ripping pretty good through there, and days 3-4 there was a little more wind…made drifts different. It changed the current up and changed the drift line a little bit. I missed the dots sometimes, so I’d just have to go back up and do it again. 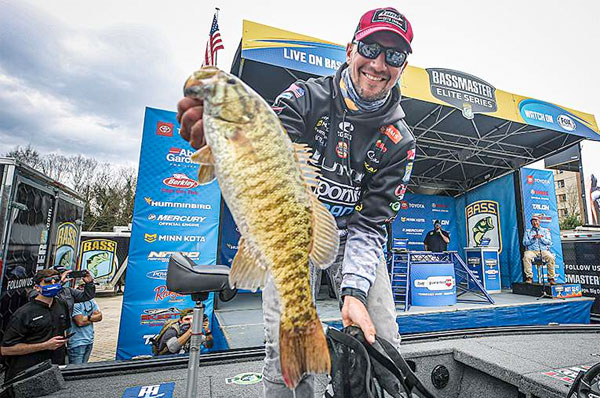 > “Before I fished the St Lawrence I didn’t have a lot of experience fishing for smallmouth in deeper water in current. One thing I learned – your first instinct is to hit Spot-Lock when you catch one. But [if you do] your jig will never make it to the bottom. I was hitting Spot-Lock when I caught 1 [in this tourney] just to hold the boat when making a drift I wanted to finish off.

> “Southern guys call it the Damiki rig, I call it ‘moping.’ Ron Lindner termed it that….”

> 4″ Z-Man Scented Jerk Shadz (bad shad) on a 3/8-oz [Bass Tactics] Smeltinator jighead made by a friend. He said he could have used other jigheads but likes the 2/0 Gamakatsu hook for that bait. 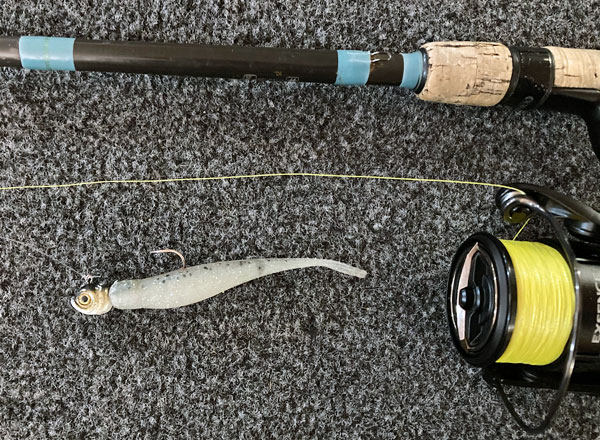 > “It’s very important that your knot is straight up off your jig so [the bait is] horizontal in the water. Every time I reeled it up I made sure it was nice and straight.

> “When we first started doing this years ago [in Canada], we used Power Minnows and Zoom Flukes. But around home here – it’s a very common tactic – just about everyone’s using Z-Man Elaztech stuff now. The buoyancy of it helps the bait sit horizontal and natural in the water.

> “I’ve probably caught more smallmouth using that technique than anything else. I started fishing the FLW Tour in 2013 and have been waiting for a tournament to do that. I did not expect in a million years that that this one would be the deal.”

> Whether fishing for an 18″ min size was wise: “It never even crossed my mind. I didn’t go there with any intention at all to fish for smallmouth. My practice was so bad, on the 3rd day I had to try something different.”

> “…long boat ride for me down that river. The Lakemaster mapping was legit…cut some corners…shaved off a mile here and half a mile there. It helped develop the spots where I caught my fish too.”

> “The highlight of everything [Sunday], after the stage stuff was done, was some of the other guys wanted to get a pic of me and the trophy – Brandon Palaniuk…John Cox [congratulated him], Jason Christie came up to me and said, ‘Hey man, the first one’s always the hardest’…Hackney came up and said, ‘You laid a [whoopin’] on us.’ That’s the part I’ll remember forever. It was a highlight to hear that. I’m a fan of the sport and that was the coolest part.”