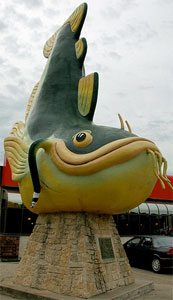 I want this in my yard, next to the lawn jockey.

Lesson learned by the Selkirk, Manitoba, Canada Chamber of Commerce: Fishermen are only going to travel so far to catch catfish â€“ unless maybe the prize cash is huge.

The inaugural Manitoba Catfish Invitational was supposed to have been held this pat August, but was canceled “due to the low number of entries” â€“ which is some refreshing honesty anyhow.

Two-person entry was $500 and the payout was announced as $20,000 (Canadian?) “with additional prizes for next 15 finalists.” Not a bad payout, but guess it couldn’t be done with just nine teams entered and no big sponsors â€“ even though Selkirk is billed as “The Catfish Capital of North America.”

From the Selkirk Journal newspaper:

> The inaugural Manitoba Catfish Invitational has been cancelled. The event, which was touted as a tournament that would draw anglers from as far away as the United States, was originally slated to take place on Aug. 6 this past summer. As the date drew closer it became clear that entries to the event weren’t as plentiful as the organizers had originally hoped, and the tournament was bumped back to next year.

> Now, other commitments have come in the way for tournament organizers, event co-chair Lesli Malegus told Selkirk City Council on Monday when she appeared as a delegation to return the remainder [$3,852] of the city’s $5,000 investment into the tournament.

> “Back in March we approached the City of Selkirk and the other municipalities to request their support in putting on what we were hoping to be a premiere catfish event in Selkirk in August,” Malegus told council. “Unfortunately, that didn’t happen â€“ by the beginning of mid-July, having only received nine entries up to that point, we decided that it wasn’t going to go.”

Not real clear from that whether the event will be held next year, as the website implies. Seems they need a better prize structure to get U.S. folks there. 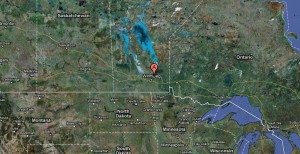 Where's Selkirk? It's the A on the map. (Click to see bigger.)

Aussie Angler Coming Here to Fish Bigs
Donâ€™t Roast Your Bird â€˜Til You See This
To Top
We use cookies to ensure that we give you the best experience on our website. If you continue to use this site we will assume that you are happy with it. Cookie settingsACCEPT
Privacy & Cookies Policy