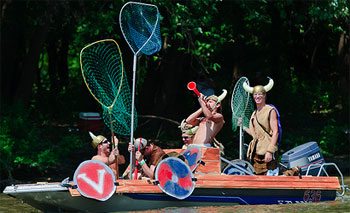 Ready for blast off….

It’s the morning of a big tourney. Let’s call it a regional one rather than your home lake.

Instead of pulling on a sublimated jersey with all your sponsors (spouse, Aunt Trixie, etc.) so you can show off your pecs and 6-pack, you dress in a ratty T-shirt and a pair of stained overalls. And flip-flops.

You throw all your rods on the deck every which way, and toss an Igloo cooler right in the middle of them. “All your rods” includes a couple of push-button outfits, one with SpongeBob on it.

You drop a couple muskie baits on the back deck, maybe even leave half a sandwich with a bite out of it on the passenger seat.

While you’re waiting your turn at the ramp, you dig your finger up your nose and act like you’re wiping boogers on your shirt.

It’s a Section 8 (mentally unfit to serve) ruse, to make your competitors think you don’t know what the heck you’re doing. Got the idea from a column in a SC paper. Excerpts:

> At times I would engage my live well pump, which appeared as if I had forgotten to install the drain plug. This would initiate the “ignorant syndrome,” and I was pretty much left alone from this point.

> Another method was to have odd and inappropriate fishing gear on board. Fishing rods that didn’t fit the bill and outrageous lures of dramatic colors and sizes sitting in rod holders for all to see. Some of my reels had their lines entangled into a mass of loops and festooned with knots….

> While many had sponsor and patch logos of every description on their clothing and boats, I opted for the more obscure. My cap logo was a ruptured duck taken from past military days. Sewn on the back of my shirt was, “It ain’t over till the bubbles disappear.” Over the front pocket was Big Buddy’s Bait and Tackle, and my boat’s only logo was “SwampFox.” But many failed to read the fine print which stated, “The best chew in the South.”

> My attire sometimes may have offended and my attitude was often abrasive, but it was all part of the game. And I must admit I fared pretty well. As competitors came to know me on the circuit and I graduated to larger and more sophisticated events, my tactics had to evolve as well. But I doubt anyone can honestly say they knew what to expect from me.

Hilarious! So my questions are:

Ike Uses Boat as Smallie Blocker
Deets: How To Fish Fork in Summer