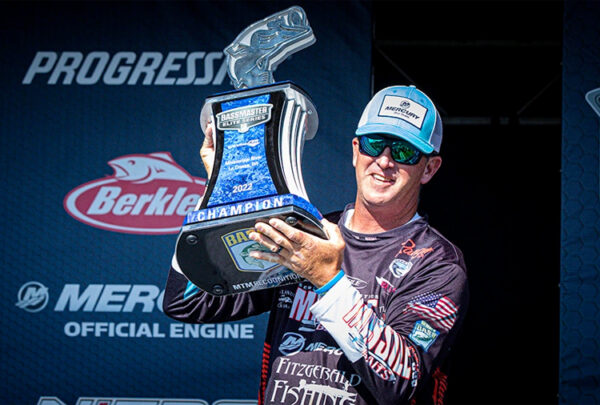 Bryan comes outta nowhere to win. It’s not like he’s bangin’ on the door and then – boom! – it’s down. It’s more like he streaks in like a missile and – bang! – the tournament’s over and there he is with a blue trophy. Happened in 2021 at Champlain, and happened yesterday. Here’s how this one went down.

> “I’d been there one other time and won a Tour-level event [the FLW Tour in May 2017]. I felt like, yes this system is somewhere I really like and I’m comfortable with, but lightning doesn’t strike twice.

> “I felt a solid event would be good. I was worried about Classic points…doing my math I thought I needed a top 15 to make the Classic.

> “I had a very good first day of practice – I felt like I had a chance of having a good tournament. My expectations were to try to make the first cut.

> “Day 1 was sunny and very calm. I wanted to catch them on a Chatterbait, but…I was largemouth fishing and I felt they were not in a reaction bait mood, that I needed to slow down.

> “I got a couple key bites quick on a dropshot rig with a Missile Magic Worm. Thank goodness they were quality – that led me to believe in that presentation. The fish were still in that area, but that presentation was the right thing.

> “I stuck with that throughout the day. They were all related to coontail edges. …not a lot of bites, but big ones.

> “Day 2 was a combination of a dropshot, Carolina rig and I actually punched a few fish.

> “I’m a grass fisherman. The first 2 days it had to be coontail. I was catching them on the edge near a depression. The coontail was almost to the surface, and I’d catch them tight to where it broke off to deeper water. [He was fishing in 6-7′.]

> “…[punching] in the same area…little places topped out where you had duckweed on top of the coontail. For whatever reason I could get a couple bites punching into those coontail mats, even on the cloudy days.

> “Day 3 and day 4 I exclusively Carolina-rigged. I went to a couple places I had been fishing the first 2 days but it wasn’t working. So I went to my eelgrass edge and it had gotten better.

> “I could only catch them on a Carolina rig.

> “…all eelgrass, depressions in 8′. I was all in on grass, from the beginning to the end. The pattern was any depressions in the grass. …needed a depression, needed some kind of deeper water next to the grass.”

> Dropshot bait: Missile Magic Worm (“blueback secret”). “I just feel like [that color] has a good contrast. It looks very natural…top’s got a little green in it…can resemble a perch, a bluegill, but it gets bit, period. The water’s not clear, but when you get tight to the grass it’s clean.”

> Dropshot hook: 3/0 Hayabusa 957 Offset Shank Worm Hook. “I don’t know what it is about that hook, but I’ve been using it for Texas-rigging for weedless dropshots and I hook ’em man. It’s the design of that hook, the coating – if a fish catches you off guard and you don’t get the right hookset, you still get ’em.

> “…lot of confidence in that hook. I was using smaller hooks and was having string of bad luck. The Magic Worm is a little bit bigger than a traditional Roboworm. This hook is real lightweight and I felt like it fit [that bait] perfectly. I started using it at Pickwick [where he finished high] for dropshot largemouth, and I’ve stuck with it.” 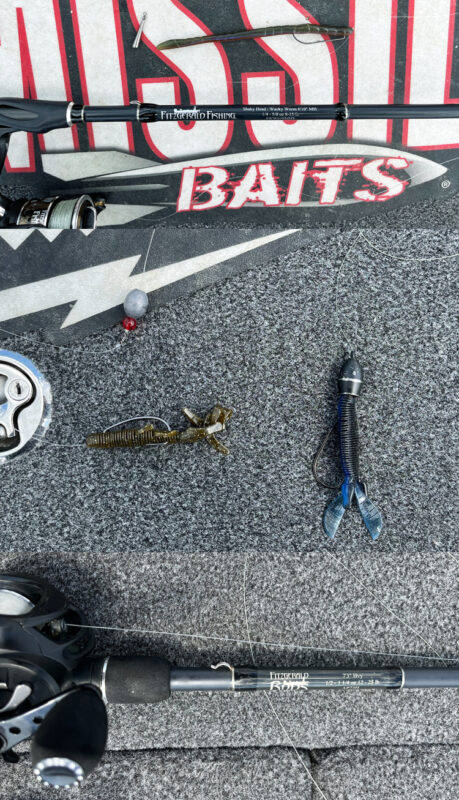 > “I’m a grass fisherman. I like to be stealthy. I feel that my trolling motor, the Garmin Force, is the quietest on the market. …helps in areas that are getting a lot of attention.

> “Even on a fishery that has this much grass, my LiveScope played a role. The spot I ended up winning the tournament on was a hole near this grassbed, and when I put my LiveScope on it I saw a cluster of fish sitting on an isolated clump of grass near the edge of the grass. I would never have known those fish were there if wasn’t for LiveScope.

> “[He also] would scan around, and every once in a while I’d see a little cluster of fish on the edge of the eelgrass. I’d bomb the Carolina rig on them…watch them come down on it, feel a bite and set the hook.

> “That LiveScope is a tool that produces everywhere. It doesn’t have to be a deep, clear lake.”