How many times do you get to fish when it’s a 10? Yep, hardly ever. Now think about that if your job was a fishing guide or fishing media guy — TV show, BassBlaster, whatever. Not saying you should feel sorry for us, just saying it’s fishing.

So I head up to the Niagara River for the annual smallie whack-fest and:

> The water on the Niagara River is higher than guide Frank Campbell has seen it in 35 dang years. And it was like coffee with cream. Check this jerkbait disappearing 3″ into the water: 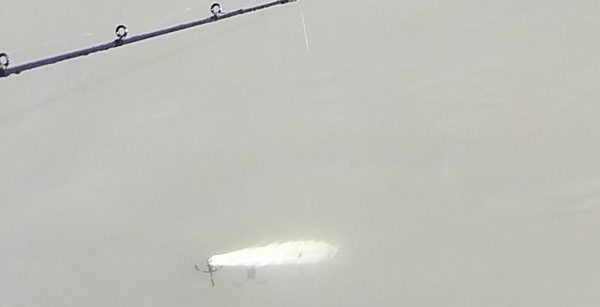 > So much runoff from so much rain that it has changed the color AND raised the water level of at least two of the Great Lakes (Ontario and Erie). Think about that — that’s a ton of water and mud mang!

> Plus it was colder than usual, so water temps were down from the week before.

Any one of those factors would’ve made catching smallmouths tough. All of ’em = not great. So no joy on the 100+-fish days that happened a few days prior.

A few what I call “village idiots” (luck fish) were reeled in, but only a few, like this one, a 5-02. That’s Jeff from Seaguar’s fish and Frank (left): 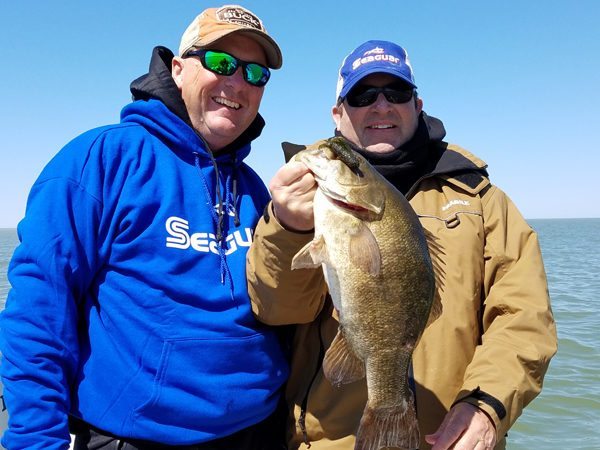 My big catch, hooked in the mouth on a 3.5″ Strike King Coffee Tube (dark melon goby, same color Jeff caught that fish on), was this:

That’s like 16″ long — the biggest dang shad I’ve ever seen. Woohoo…not. Only other fish I caught was even more disappointing than that one: a dang wally-eye. BUT I did get some a-learnin’ about how to catch Great Lakes smalls, so here you go. And know, bass-heads, that I DID NOT use a wimp-stick:

> Dragging a tube is still the preferred method of catching ’em for guides. Part of the reason is they’re easy to fish, and part is that they flat catch smallies. In other words, the dropshot hasn’t even come close to killing off the ol’-reliable tube.

> Gobies have a purple sheen to ’em, so all the guides like tubes with purple flake. Again like the Coffee Tube in dark melon goby:

> If the tube has a light bottom — like “goby lishish” here — even better:

> Sometimes smaller is better. Guide Terry Jones sometimes likes this small BPS tube — not sure if you can see the white-ish belly: 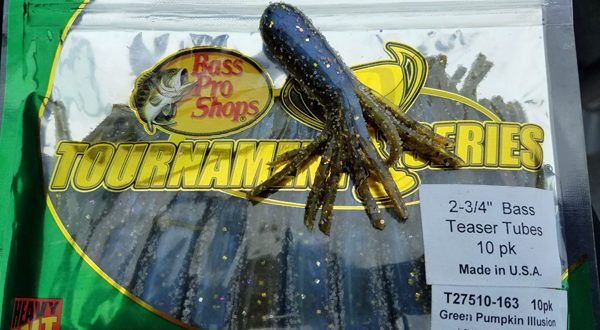 > You can rig your tube using a regular tube jighead, or do it this ultracool way like Terry does it:

(Here’s one football jighead like that. Terry and other guides usually use 1/4-oz, give or take 1/8-oz.)

> Terry likes Seaguar’s Red Label fluorocarbon because he says it holds up well and is the most inexpensive Seaguar fluoro. On Frank’s boat we were fishing with Seaguar AbrazX fluoro because of zebra mussels — 8-lb on the wimp sticks and 10-lb on my baitcaster.

> It hit me as we were all bumming about the fishing-related high water that a lot of folks in Missouri have a lot bigger issues from high water. Looks like we can help ’em here.