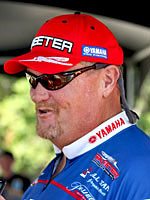 Perusing the Strike King site again, happened across this advice from one of the true gems of our sport, Mark Davis. I read it and was like â€“ phhh, everyone knows that.

But then I realized that not only do I let dock talk get in my head in fishing â€“ doesn’t even have to be competitive â€“ it also screws me up bird-hunting: My hunting buddy and I have wasted a TON of time following others’ recommendations, and every dang time we say we’re not going to do it anymore.

Anyhow, here’s what Mark said, then a question for you:

A big part of following your instincts is not being swayed by the conversations you hear at the boat dock.

For instance, as youâ€™re getting in your boat, you know you should be fishing points and ledges with a Carolina rig. But some guy whoâ€™s just come off the water asks, â€œHow are you going to fish today?â€ and you tell him, â€œIâ€™m going to fish points and ledges with a Carolina rig.â€ He may say, â€œOh, no. You need to be fishing buzzbaits in the grass.â€

Youâ€™ve got to listen to your own voice and not the voices of others who probably donâ€™t know as much as you do. Youâ€™ll do a much better job of catching bass by following your own instincts than you will following somebody elseâ€™s recommendations.

He also said, this which I’ve done â€“ the 30 minutes part, tough to overcome sometimes especially if there’s someone else in the boat saying, “This sucks, let’s get outta here.”

Learn to listen to your inner voice, and be confident that that inner voice is telling you the right things to do. Donâ€™t be out fishing during the day, make a decision on pure instinct, and 30-minutes later decide youâ€™ve made a bad decision.

So, tell me you’ve never done this. Or if you have, how ’bout a doh! moment when someone won the tourney on a spot or using a pattern you’d planned on.

The headline of this post reminds me of the time I first said to the fellas we needed the Dock Talk section of BassFan. They were like, What do we need that for?

Still cracks me up….