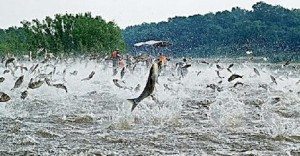 I don’t know which dumb thing to start with, but both of these belong in the category “you can’t make this stuff up.”

Our amazing country has some problems right now, notably financial ones like: T-word national debt, Congress and the president spending like it’s their last year on Earth, sending as much money (and expertise) to China as we can, lots of good folk out of work and underwater. Not good.

In the midst of this fire drill, we get an announcement that the White House has appointed a “carp czar” â€“ “czar” as in “drug czar,” a person responsible for that particular issue.

On a conference call today with Illinois Sen. Dick Durbin and other congressional leaders, President Obama’s Council on Environmental Quality announced the selection of John Goss to lead the near $80 million, multi-pronged federal attack against Asian carp.

“This is a serious challenge, a serious threat,” Durbin said. “When it comes to the Asian carp threat, we are not in denial. We are not in a go-slow mode. We are in a full attack, full-speed ahead mode. We want to stop this carp from advancing.”

Asian carp…present a challenge for scientists and fish biologists. The fish are aggressive eaters, consuming as much as 40 percent of their body weight a day in plankton, and frequently beat out native fish for food, threatening those populations.

Not to mention being a legit, bone-breaking threat in waterways. 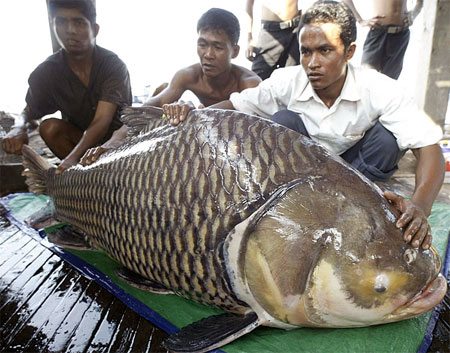 It would be kinda cool to catch one this big though....

The Ultimate ‘Jackpotter’
2 of 2 Dumb Things This Week: Green Nuts