Sometime during the Classic, someone asked me what I thought about having cameras in boats and drones overhead. Didn’t really have time to think about it then, but after I saw this meme on Edwin Evers’ Facebook page, I did think about it: 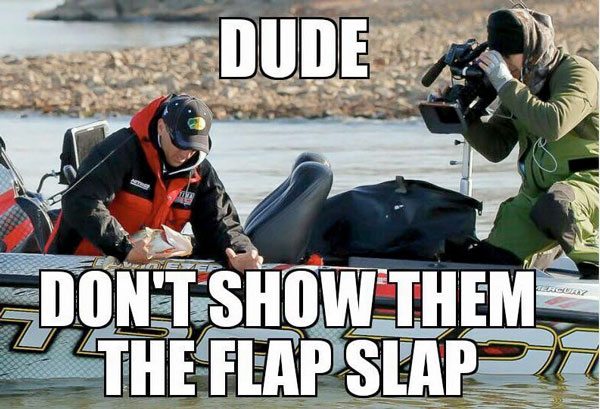 For fans, it’s pretty amazing to see how guys are fishing — the whole “watch it happen live” thing B.A.S.S. is doing is pretty wild. I want to see how the guys are fishing what baits. I’m a junkie, man — I’m all about that. I NEED info just as much as I NEED baits!

If I’m a local I guess I want to see where they’re fishing too.

As a professional competitive fisherman, I’d frickin’ hate it, with a capital H-A-T-E. Here I am doing my thing that I’ve worked years to perfect and make my own — plus I have a strategy for this event I’d kept secret — and there’s a camera IN MY BOAT showing it to the whole dang world??

Guess I’d get the whole “it’s great for the fans” thing, but hey — I’m in a competition, dang it! Got my career, lots of money and my kids’ college education on the line. That’s a whale-load more important to me than some here-and-gone entertainment.

To me, it’s like showing an NFL coordinator’s play-call sheet during the game. Belichick might be cool with “unintentionally” having that info, but it doesn’t make sense.

The whole drone thing = same deal: The shots look cool for me as a fan, but if I’m a fisherman, forget it…sometimes.

Here’s why: You all have spent lots of time on and around water, so you know that any shadow from above can send even the biggest fish in the lake zipping outta there — out or deep or whatever. It’s done.

You could have a fish that’s 5x the size of a bird, and a shadow from that bird will put fear into that fish.

And I truly believe fish fear is contagious…to other fish.

So if you’re sending a drone over my head while I’m fishing in a competition, I will blast it outta the sky with my trusty Remington 870. Or I’d want to. And if you didn’t ask my permission first, I might not be your friend anymore.

The fine line is where does “just enough” info stop and “too much” start? I honestly don’t know. I learn a lot from the pictures Overstreet, Seigo, Bowman and the other B.A.S.S. shutter-blasters take on the water. Not as much as from live video.

So are the pics okay — meaning they don’t cross the line? My 2c is yes, but that’s just one idiot’s opinion.

Disclaimer and the future

The disclaimer here is I don’t fish for a living, never have, never will. So maybe the Elites have a different perspective on this stuff than I do. Or maybe they just put up with it because that’s the way it is.

Wherever you come out, know that coverage of bass tournaments is in flux. It’s changing. It’s not staying here because of technology and how our needs, wants and expectations change as a result of that tech.

I still believe that sometime in the near future, POV cameras (eg, GoPros) are going to be the main way we watch tournaments. They’ll provide the action, and the pros will provide their boat feeds (if they want) for a fee — that’s what I’d do, anyway, if I were a pro fisherman.

The rest of the coverage — Bassmaster web and TV — will still be important, just in a different way.

Will it all still amount to “too much information” given away during a competition? Probably.