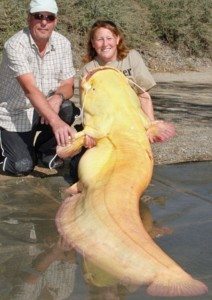 They call me Ishmael.

Okay, this post had to start that way. Because this is about a white whale â€“ a whale of an albino catfish caught by a legally blind gal in Spain.

Here’s how it happened.

> The River Ebro, near Barcelona, Spain is know for its giant cats. World-record size.

> If you ever saw that River Monsters episode where the guy goes to the Ebro, the method for catching them is to row a hooked bait out to the middle of the river (rod on shore), drop the bait, then row back. Then wait. You might not get a bite for days.

> Alan and Sheila Penfold (the aforementioned gal) started fishing. “Within days,” according to this article, he caught a 212. Then a 214, matching his wife’s biggest ever.
http://www.dailymail.co.uk/news/article-1341953/Blind-fisherwoman-breaks-TWO-world-records-holidays-taught-husband.html

> She said: “When I first felt the tug I thought, this is either a good biter or a massive fish, and then all of a sudden it started streaming off the line and it felt like I had hooked a car.”

I gotta believe that’s the largest albino fish caught of any species. Any albino bass caught out there? Pics to prove it?

> The whisker-fish record is a 646-pound Giant Mekong Catfish caught in Thailand in 2005.