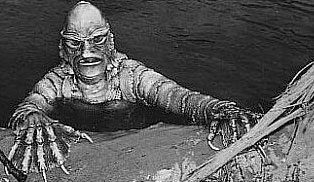 Look at those claws!

By that headline you’ll assume this happened in saltwater, and you’re right. A 46-year-old woman was kayaking in the Florida Keys on Sunday when suddenly something leaped form the water, punctured her lung and then disappeared.

> The kayakers were on a “real nice Sunday afternoon kayak ride,” paddling past pristine wilderness near Big Pine Key, said Capt. Kevin Freestone, owner of TowBoatU.S. They then saw “quite a big fish that was skipping across the water,” Freestone said. “Lo and behold, it went and hit her. Crazy.”

> The fish, which the kayakers estimated was about four feet long, knocked [the woman] from [a] two-person watercraft, but she climbed back in.

> The Coast Guard issued a news release blaming her injury on a barracuda. But the Florida Fish and Wildlife Conservation Commission disagreed. FWC Officer Robert Dube said, “It was definitely not a barracuda. She was struck by some species from the water. Nobody saw it. We can only speculate at this time.”

> “It sounds like a houndfish,” said Jason Schratwieser, conservation director of the International Game Fish Association. “Those things have been known to jump out and impale people.”

> “There are several species of fish that will jump out of the water in South Florida,” said George Burgess, director of the International Shark Attack File at the Florida Museum of Natural History. “The barracuda is certainly one, the houndfish is certainly one, and the king mackerel will jump out of the water. The most likely one of the three is the houndfish. The houndfish and other needlefish are…documented to get embedded in humans.”

Think those Asian carp are bad? Check this out:

> Ten years ago, a houndfish seriously injured a 17-year-old girl standing in chest-deep water near the site of Sunday’s incident. The fish leapt from the water and stabbed her, breaking its bill off in her neck. It had to be surgically removed. She underwent speech therapy to restore her damaged vocal cords, and was left with a 6-inch scar that runs from her left ear down toward her collarbone, the St. Petersburg Times reported in 2000.

Apparently the injured woman was stabilized in ICU and will make a full recovery. We’ll stick to bass, and the occasional snake or Florida gator….