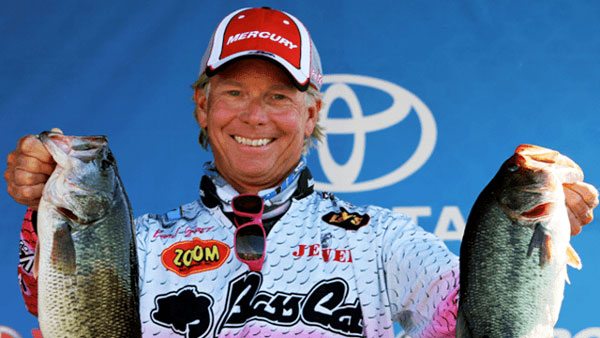 After being all serious-like with numbers, charts, disclaimers, and gnashing of teeth and such, it took a trip to the pond to help bring me back to what this bass fishing thing is all about.

Itâ€™s about all those things and none of them at the same time.

The awesomeness of all the nature around us.

Itâ€™s about all those, and none of them.

This thing we know as bass fishing is all of the above and none of the above, depending on what it is to you. Itâ€™s different every day.

A buddy of mine and I went to the pond the other day just to see what we could catch. Conditions were perfect for a late winter day â€“ abnormally warm days and nights, and a cool front on the way. Perfect conditions for some late-winter, early prespawn activity. The day started off cool and slow, but warmed up dramatically when we finally nosed around and found some clearer, warmer water.

My buddy, weâ€™ll call him Bud, is what I would consider the typical bass fan. Heâ€™s a middle-aged professional type. Good job, but by no means rolling in it. Couple of kids. Nice house. Nice boat. Follows the pro level of bassinâ€™ some. Fishes a few local club tournaments. Catches some fish on occasion and just has a blast every time he goes out on the water.

Iâ€™ve fished with Bud a few times, and heâ€™s one of those guys who will stand in the back of the boat and throw the same plug all day long, sometimes whether heâ€™s getting bit on it or not. Not that thereâ€™s anything wrong with that, unless youâ€™re not getting bit and want to catch fish. Then you might need to try something else.

Some days Bud will experiment and some days he wonâ€™t. Heâ€™s like a lot of us basser dudes that get stuck in a â€œthey should be biting this way todayâ€ rut instead of allowing the conditions and the fish to show us whatâ€™s up. This was one of those days when Bud threw the same bait all day long and caught fish on the same bait all day long. Even when he lost a bait and had to tie on another one, Bud didnâ€™t try another color. He reached in the box and pulled out the same Red Eye Shad in the same craw color. If it ainâ€™t broke, Budâ€™s not going to fix it.

The deal with Bud

Hereâ€™s the deal with Bud â€“ and this is also what holds the fascination, the allure, the magic that’s bassinâ€™ at any level: Bud likes to put the pieces of the puzzle together and figure out how to catch ’em. Despite the fact that he gets pig-headed stubborn some days, as we all do, he still wants to know what it takes on any given day to catch fish.

It doesnâ€™t necessarily have to be big fish. Bud was perfectly happy catching 12-15 decent keeps and an occasional 4-lber. He wasnâ€™t ticked off when he had a big one grab his junk right at the boat, made a big run under the back of the boat, and double his skinny a** over, trying to hang onto her before she pulled off.

Dude was down on his knees holding onto his rod that was seriously doubled over under the boat. It was a funny sight.

Even funnier was the fact that it didnâ€™t matter to Bud that he lost a g-g-g-giant. He giggled like a little school girl at the prom after it was over that a fish could be so powerful. It was fun.

THAT is what bass fishing is all about, folks at home. Thatâ€™s what ALL fishing is about, regardless of species. Fun.

Itâ€™s fun for different people on different levels. Some love the thrill, the adrenaline rush, the competition of a derby day. They want every day on the water to be a competition. Good for them.

The overwhelming majority of bass anglers in the U.S. donâ€™t fish derbies, donâ€™t follow the derbies, and could give a ratâ€™s patooty about derbies. They fish to spend time with Bud.

They fish as an escape from a hectic job. They fish to put the puzzle together. They fish for fun.

I meet people on a daily basis in the fishing industry who seem to have forgotten that theyâ€™re selling FUN. Whether itâ€™s rubber worms, outboard motors or KVD UndeRoos, itâ€™s all geared toward helping people enjoy themselves. Weâ€™re not curing cancer or solving world hunger issues here, folks. This fishing thing is all about fun. Go get you some fun, people.

Who pays the payouts?
Bidness expenses