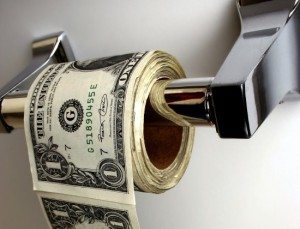 So how much does it actually cost to fish a season in the Bassmaster Elite Series? We know entry fees are going to cost you an arm and a leg, but what about all the incidentalsâ€”travel, food, lodging, all that fun stuff? Maybe I’ve missed it, but I’ve yet to see a big league pro come out and say how many greenbacks they actually burn through during an average year on the trail. That was until yesterday.

The boys at BassFan caught up with Louisiana pro Greg Hackney to get his thoughts about the new Classic berth structure, and Hack dropped this little tidbit in his response: “My opinion is they shouldn’t be adding people to the Classic who don’t have to beat the rest of us consistently. If I’m going to fish the Opens, it’s not going to be to make the Classic, it’ll be to make more money because my expenses are so high. I’ve been at this for awhile now and the hype’s kind of gone â€“ I’m doing it to make a living and support my family, and right now it’s costing me about $90,000 a year.”

Sweet baby jeebus that’s a lotta dough! I don’t care how many fat-pocketed sponsors you’ve accumulated, working any gig that sets you back 90 large right out of the gate takes some serious juevos and one heck of an understanding spouse.

The vast majority of us will never get a sniff at the opportunity to fish for a living as a touring pro. But what about the guys that actually put it together, fish their way up the ranks and have to make the decision on whether or not to make the jump? Is there always going to be the guy that throws caution into the wind, risks it all and takes the leap? Sure. But I have to believe that many talented, qualified anglers (or their spouses) take a look at the pros and cons and simply say, “Forget it!”

I can’t think of anything that would be cooler than swinging a chunky largemouth into the boat and looking into an ESPN camera and yelling, “Look out Skeet, the J-train is pulling into the station!” (That’s my tagline. Yeah, it needs some work.) But in the end that’s just smoke, mirrors and a bunch of fluff. The reality of the whole lifestyle isn’t nearly that extravagant. I guess what I’m saying is, even if I had all the fish-catching prowess needed to make it happen, I’m just not crazy/stupid/risky/confident enough to throw 90 grand into what may end up being aÂ colossalÂ flop of an investment that takes me 40 years to pay off.

But, then again, maybe that’s why I’m not a millionaire mogul (like Jay Kumar) by now.

How about you? If Trip Weldon called you tomorrow and asked you to jump on the Elite wagon, would you go knowing the whole experience was going to set you back nearly $100,000 (in my middle-class world, 90 grand might as well be an even 100)?