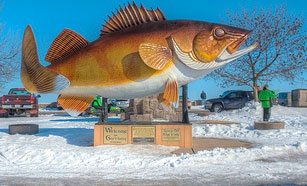 Check out that HUGE trophy!

You know those other fish people fish for in derbies, the ones with the teeth? Wall-somethings? Well, a particular wall-something tournament was recently certified by the Guinness folks as the world’s biggest.

Some details, according to this blog:

> The event featured 358 teams, all but two of which were two-person teams.

> The NTC is one of the most prestigious competitions in the country. Teams qualify by accumulating points in local tournaments organized by more than 50 sanctioned grassroots walleye clubs. Now in its 26th season, the Cabela’s MWC is the longest-running professional walleye tournament circuit in the United States.

New Classic Structure: Thoughts
So You Wanna Fish the Elites?