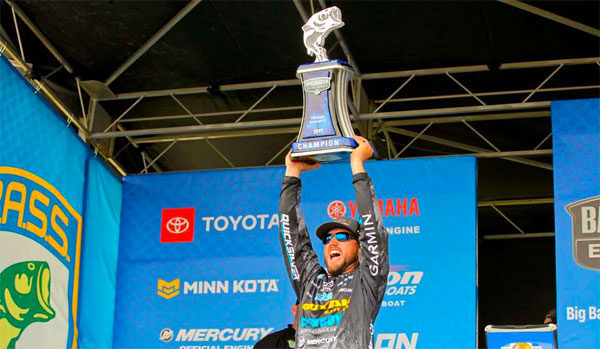 Huge congrats to Stetson for winning his first blue trophy — which he didn’t think he’d win at Winyah. Here’s the story plus his winning baits.

He finished 2nd at Hartwell, SC — so he fished on Sunday — and drove all night to get to Winyah Bay, SC for the start of practice on Monday:

> “I didn’t get there til 2:00am the first day of practice. After fishing 7 days, there was no way I was getting out there [to practice] at daylight. After re-rigging and all, I didn’t get on the water til probably noon.

> “I launched on the Santee River, but it was blown out. I never had a keeper bite the first day of practice. I was kind of disappointed — I knew some fish would be caught, so I had to adjust and figure it out pretty quick.

> “The 2nd day I made up my mind that I was not going to run to the Cooper River. I felt like you needed 3 full days to explore that over there so you could commit 100% to it.

> “…got on my graph, was looking around…saw this area. I actually asked Micah [Frazier], since he’d fished [Winyah] before, if it ever was any good. He said, Yeah, some guys had caught a few fish there before. So I went in that area, and man it just felt like home.

> “…was a series of canals, and in the very back of canals was a pond about 20′ deep — I’d call it a sand pit. I made 1 pass around it and got 8-10 bites…no hook on my bait…shook fish off and saw a couple others that looked like they were trying to spawn.

> “I thought, Okay, at least I can come in here and catch a limit the first 2 days, and maybe make the top 35. That was my goal for the week with a short practice and not knowing anything about Winyah. …didn’t have anything else I felt confident in so I was forced to fish what I had.

> “That was the biggest key to winning the event — not having any water to fish except that 1 area.”

> “The first day…I was the first boat in there and started getting bit immediately, but only caught 4…lost a couple. I was thinking, Okay, 4 decent fish, if I could catch [another one like them] that would be great. I fished all day [without another keeper].

> “That 12-inch bass was the difference between winning and losing the tournament.

> “Day 2 I go back in there — I was boat 66, a late boat. The first day, 4-5 guys were in there off and on with me so I expected to show up there day 2…idle in there and not a single boat anywhere…. I got to fish it at my pace, ended up catching 12 lbs or whatever, just a good solid day.

> “One of the key adjustments on that day was…about 11:00 I idled out of my little pond into the first canal…and when I pulled in there, trolling down the bank, I spotted a 5-lber on a bed. …caught the male and female about an hour before I headed back.

> “The last day was a total trainwreck and disaster. …I needed to go out and catch another 15 lbs, but I’m also thinking I’m probably out of fish. You always have those voices in your head saying, ‘You can’t do it 4 days in a row in 1 place, it’s not possible, you’ve burned up everything you’ve got.’ But I just stayed calm….

> “I catch a small one, then lose a really nice one — 2.5-2.75 lbs — and that started the downward spiral. As far as momentum…didn’t lose a single fish day 3, then in the finals I lost that good one right off the bat. I kind of fished poorly all day long…really not accurate with my casts, just an off day fishing-wise.

> “…I was fishing a little faster, my mind couldn’t focus just on fishing, was watching him…. You lose focus a little….

> “I made a decision to slow down, keep fishing…ended up catching a couple 1.5-lb fish that normally wouldn’t mean anything — just keepers, but looking back every single fish I caught on Sunday played a key role in winning that tournament just because bites were so hard to come by.

> “I didn’t knowing the whole field was struggling. I had no idea I had a chance to win — I thought I’d be finishing 5th or 6th after the day I had.

> “Late in the day I was trying to figure out how to finish my limit. I pulled in this ditch where I caught the 5-lber…randomly skipped under a boat dock and caught my biggest fish of the day, a 2.5-lber. That kind of calmed me down, but I thought I had to catch 3-4 more like that to have a chance.

> “…pitched under this tree, had one on and missed it. Pitched back in there, caught this fish that was maybe 1.75 lbs. I open my livewell, and I had one 2.5 and 4 small ones. The smallest one I had was barely a 12-incher…thought that fish was dead. Under B.A.S.S. rules you can’t cull a dead fish…laid it on the deck of the boat and the gill flared twice. [Culled it] real quick…sucker swam off, don’t know how.

> “So every piece of the tournament worked perfectly, and that last cull was no different. Had that fish died…lost 4 oz for that, and the weight difference was such that I probably would have lost by a few ounces.” 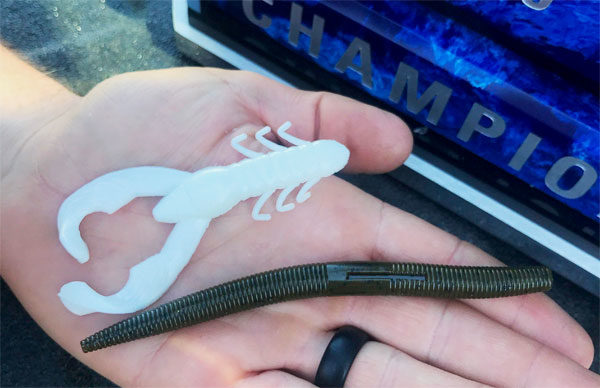 > “When the tide was up I would blind-cast [with the wacky rig] to structure and open holes in the bushes and trees growing around the banks…. As the tide would fall, I’d make pinpoint casts to light spots I could see. As the tide fell completely out, I was looking for fish I could see.”

On getting his first blue trophy:

> “After the day I had [Sunday] and how disappointed I was in my performance, it still hasn’t really set in. Because I’m telling you…you can’t win when you perform like that. To be able to actually walk away with that trophy, I’m still in shock.

> “Every fisherman’s goal is to win an event…work your way up to the Elite Series…to finally win at the top level is huge, and it means more to me now than it did 10 yrs ago when I won my first FLW tournament. Because I understand 10 yrs later just how hard it is for everything to go right 4 days in a row…. Just makes me so much more proud to come away with a win.

> “I think a lot if it, the last couple years I let my mind wander from fishing the way I like to fish. I’ve made things too complicated…not been focusing where I need to…. It cost me a lot.

> “I do think the good Lord has been teaching me a lesson the last 2 years…patience and waiting on his timing…. Your life is a path, and you can’t control a lot of what goes in in your life. I always try to make sure everything I have control over is the way it needs to be. I feel like sometimes God will put you in a place in your life where you have to be completely dependent on Him to be successful in your own eyes. For me to struggle the last couple years…decisions have been making on the water have been hard, but finally the last few tournaments everything has been clicking…coming together, leading me to the win this week. And all credit goes to Him for sure.”

How Brandon Cobb won the Hartwell Elite
How Andy Morgan won BPT #4 at Chickamauga
To Top
We use cookies to ensure that we give you the best experience on our website. If you continue to use this site we will assume that you are happy with it. Cookie settingsACCEPT
Privacy & Cookies Policy