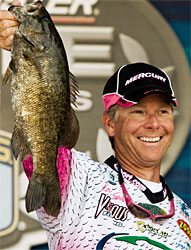 [This BassParade exclusive is by pro derby fisherman Kevin Short.]

A note to Boyd: After reading your plea for some piscatorial direction on the Louisiana Delta as noted here on bassblaster.bassgold.com, I wanted to drop you a line and slip you a little sumpinâ€™ just FYI:

> “We” donâ€™t all talk to every local that “we” can get on the other end of the phone.

> “We” donâ€™t all “pick the brains of the people who know the waters well.”

“You,” Boyd Duckett, might be the end-all, be-all of information gathering â€“ which is cool, as long as all that information is obtained before the off-limits period begins. But “You,” Mr. Duckett, do not speak for “We.”

Before ‘Me’ goes any further, let me state this: ‘Me’ has nothing but the utmost respect for Boyd Duckett and what he has accomplished on the tournament trail, and in his business dealings. Being a Classic champion, the man is an icon of the sport. He’s also an extremely successful businessman inside and outside of the fishing industry. Again, lots of respect for Mr. D, but…

…”we” donâ€™t all get help on the Elite Series. Not wanting to speak for “We” â€“ “We” being my fellow Elite Series anglers â€“ I can tell you that “Me,” Kevin Short, runs from information like itâ€™s a sack of pissed-off squirrels.

Yes, K-Pink has gotten information in the past. The few times “Me” has received info, “Me” has floundered hopelessly in the derby. Itâ€™s blown up on “Me” faster than a backlash in a cheap baitcaster.

As a general rule and for whatever reason unbeknownst to “Me,” intel ops on the part of K-Pink usually go FUBAR beyond all belief.

Some recent examples of this unexplained phenomenon include the 2008 Classic at Hartwell, the 2010 Classic at Lay and a Northern Open on the upper Chesapeake Bay this past September. All jump out as shining examples of why “Me” doesnâ€™t play well with info gathering.

> The 2008 Classic was a respectable finish in the 20s only because the intel that “Me” had garnered was pretty much useless for the conditions.

> The Classic at Lay was absolutely disgraceful. Pretty sure the only person I finished higher than there was Denny. We were both stubborn enough to spend two days looking at each other in the same creek, watching each other not getting a bite.

> The UCB this past September was just butt ugly â€“ thatâ€™s all I have to say about that. Info gone wild. Like I said earlier, FUBAR.

So, yes, “Me” has gathered intel and “Me” has gotten sca-rewed by that intel. Not through the fault of those giving the info, just some kind of intel mix up in my own twisted brain.

Most of those who have tried to help “Me” have been what many would call “local experts.” Not that it did “Me” a lot of good. Maybe “Me” just hasnâ€™t figured out how to process and filter out whatâ€™s good intel, based on my fishing strengths, and whatâ€™s bad.

I think Iâ€™ll just stick with what Boyd says in closing his Sept. 9 blog entry: Show up and catch the fish.

As a matter of fact, showing up and catching the fish has worked well for “Me” in the past. June of 2009 on the Mississippi River out of Fort Madison, Iowa comes to mind. Local intel was pretty much useless, as floods along the upper Mississippi the previous year had devastated the fishery and completely changed many of the local hot spots.

Show up and catch the fish â€“ thatâ€™s what we had to do, and thatâ€™s what many of us did, “Me” included. (Chest beating here.) Yes, “Me” won the derby with NO help from NO one. Amazing, I know, but true.

Same story, different pond this past April on Pickwick. NO info. Just put the boat in the water and caught the fish. Elite Series win number two. Just “Me.” Not “We”.

“Me” would be fine if “We” couldnâ€™t get any info from anyone at any time about any body of water after the schedule is announced. Let me break that down:

Seriously. No info. Period. Not even from your fellow competitors. Ooh, that might put a crimp in the “teams” and “networking” that goes on among Elite Series anglers. “Me” is not a fan of that either (in case you couldnâ€™t tell).

Iâ€™ve always thought that the highest level of competition in the bass fishing scene would occur when “We” in the front of the boat were all competing against only each other. Kind of like those early Classics when Ray would load everyone up in the plane and the competitors would find out where they were going when the wheels left the ground â€“ thatâ€™s when men were men.

None of this “Me” competing against a “team” of two or three other “We’s” who were sharing info.

Not “Me” competing against a “We” who hired the best guide on the water before the off-limits period.

Not “Me” competing against another angler who called every local expert with a pulse before the off-limits period.

Show up and catch the fish.

[After reading this a couple times, it’s making me feel like I have to “We” â€“Ed.]