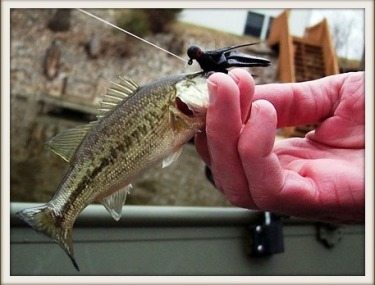 Ask a serious bass fisherman what he caught and without hesitation, an “eyeballed” fish grows. Suddenly the world is filled with guys who catch 5-pounders.

I don’t know what it is about the 5-pound mark, but suffice it to say that any bass close to that mark will at some point exceed it in a future retelling. This seems especially true with tourney anglers (sorry guys). They’re always catching limits in practice, and they always manage a 5-pounder or two along the way. Based on the practice reports, I can’t even begin to imagine all the tourneys that were won before they even started. Everybody is killing them except you!

But as I always like to say, the scales don’t lie â€“ the truth always comes out at weigh-in time.

Nowadays, many states have adopted a tournament-reporting feature into their fishery departments. This is seen as a low-cost way to capture lots of data on the general trends in bass populations in these states. Overall the data is fairly reliable, especially over time or as number of reports increases.

I’m not sure which state actually started the reporting trend, but many have caught on and they all seem to use a similar, standard format. You can view many of these reports online, with states such as Kansas, Alabama, Oklahoma, Tennessee and Mississippi all posting access or summaries at some point. Many of these reports go back nearly 20 years for a given state and show some interesting trends. Of course, the part I’m most interested in for this pieceÂ is the stats concerning 5-pound bass.

I sat down one day and compiled all the data I could from these state reports concerning the hours to catch a 5-pound bass. One of the surprising things that came out of looking at all that data was how similar the tim frames and numbers were from state to state. So after compiling reports from 6 different states totaling over 18,000 tournaments and comprising over 4 million angler-hours on the water, the average time it takes to catch a 5-pound bass works out to be:

If you look at just the best lake in any given state for a year that has at least five filed reports, and average these across states and years (again, striking similarity between states), you find these better lakes averaging 165.5 angler-hours to catch a 5-pound bass. And remember, these are tourney stats!

So you now have some basis for comparison. Keep in mind that this is just a cross section of reporting states. I would expect those that fish California, Texas or Florida to have much better numbers. But for the rest of us, just be wary when the dock talk and fishing reports venture into the realm of all the large bass being caught. Honest-to-God 5s are simply not that common on most waters throughout the country.