Can a bait get more blue than this? (CWCrab.com photo, click to see way bigger.)

[This post seems to be particularly important in light of the fact that a derby of some note is scheduled to be fished in brackish water in a couple months. What’s it called again? The ‘class’-something?! â€“Ed.]

What bait do you use when when you’re fishing for delta (brackish-water) bass? What prey item do you think you’re mimicking?

If you’re fishing a crawfish color and trying to mimic such “invertebrates,” you’re on the right track. But you’re not mimicking the food source coastal largies like most.

That’s one of the most interesting things found in a study of Mobile-Tensaw Delta bass by Auburn University scientists, and it appears to relate to why delta bass grow faster (if you missed part 1 of our breakdown of their paper, click here). Here’s the info â€“ we added bold for emphasis:

> Blue crabs composed a large portion of the total biomass of largemouth bass diets downstream, similar to findings in other coastal areas [just in case you think that’s limited to the Mobile region].

> Consumption of invertebrates or other marine influences may alter patterns of energy allocation, resulting in reduced length relative to weight [balance beam for fish!].

Couple notes about the table first:

> The diets of largemouth bass were diverse (Table 1). As a percent of total biomass, blue crabs were the most important item in the diets of downstream fish in all years.

> The diets of upstream fish were dominated by fat sleepers, crayfish, redspotted sunfish, bluegill and greater siren, but blue crabs were always the third or fourth most important prey for upstream fish. 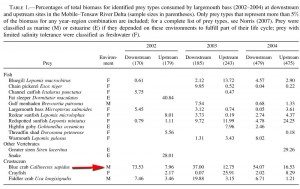 Here's the bass diet table from the study. Click to see it way bigger. 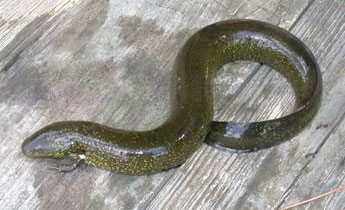