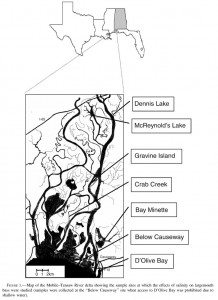 Map from the study, click to see way bigger.

Recently happened upon a scientific paper called “Coastal Estuaries as Habitat for a Freshwater Fish Species: Exploring Population-Level Effects of Salinity on Largemouth Bass” â€“ got that?!

It’s by Alicia Norris, Dennis Devries and Russell Wright of Auburn University, and I read it because the summary basically said that some of what we all accept as conventional wisdom about delta (brackish-water) bass is wrong. Wait a sec â€“ decades of bass fishing wisdom can be wrong?

Yep. Here’s what we can learn. (Btw, the study was on bass in the Mobile-Tensaw Delta.)

Largemouths move up and down a river system due to changes in salinity. In other words, when it gets more salty, bass bail and move upstream.

It was clear from our sampling and from tracking of largemouth bass in the Mobile-Tensaw Delta by Norris et al. (2007) that there was no large-scale migration of largemouth bass upstream to avoid encroaching salinity or marine predators.

Neither did we observe avoidance of those habitats [when salinity increased] â€“ that is, we consistently collected fish from all sites, even those with elevated salinity.

Bass do NOT move when the water gets more salty â€“ why would they if they can handle it and their favorite prey is there (more on that in part 2).

Study co-author Dennis Devries told BassParade: “What we found was that bass don’t move in the Delta…in response to salinity.Â  So they stay put, and instead of the crowding that we thought might occur, we found that catch rates of bass differed by habitat type â€“ [it’s] higher in sites off of the main river channel.

Brackish largies are stressed and don’t get as big as upstream bass.

Largemouth bass showed none of the physical characteristics (reduced relative weight, reduced growth or increased mortality) consistent with increased stress downstream where they were exposed to seasonal pulses of salinity.

Length at age for age-1 largemouth bass was significantly greater downstream than upstream…and [upstream bass] had higher relative weights throughout life than did those upstream. These effects may have been due to availability of marine-derived food resources…[again, more on this in part 2].

There were no other differences between downstream and upstream sites for other ages….

> Even though largies grow faster in brackish water, they die faster â€“ meaning they have a shorter lifespan. So “the scarcity of large largemouth bass in this system appears to be the result of a life history (short life span) and energy allocation strategy that may be an adaptation to or simply a physiological response to life in an estuarine habitat.”

Brackish-water largies grow faster possibly because of diet (be sure to read part 2!), but also don’t live as long.

> Another thing that can affect delta bass pops: “The unpredictable nature of hurricane activity…adds to the variability. These storms can serve to displace marine inhabitants and saltwater far inland, which leads to widespread vegetation die-offs and fish kills.”

> Randomly interesting: “During all 3 years, mean length decreased from winter into spring and then increased throughout the summer.” So go for the limit in late summmer/fall.

From the paper: “Current fisheries management practices for resident freshwater fishes in coastal areas are similar to those of inland reservoirs. This management approach may need to be modified, given the differences between inland versus coastal systems and a lack of fish movement in coastal areas such as the Mobile-Tensaw Delta.

“As such, largemouth bass in different areas within this delta may be functioning as separate subpopulations and may require different management strategies.

“Our results suggest that the largemouth bass population in the Mobile-Tensaw Delta does not appear to be strongly limited by prey resources and may experience high natural mortality (i.e., a life history characterized by short lifespan). Consequently, this type of population is unlikely to respond to traditional management practices (e.g., length and bag limits) designed to achieve more memorable and trophy catches.

In Part 2: What UNUSUAL Delta Bait You Should Be Fishing