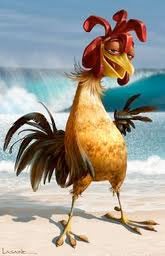 The name of the deputy wasn't released, but we think it was Chicken Joe.

Okay, not fishing, but worth it. This headline in The Gainesville Sun I thought said it all: “Trying to kill injured deer, deputy shoots it 17 times.”

I really don’t know what to say about that. It sounded insane. So I read the story and it gets even nuttier:

> An Alachua County sheriffâ€™s deputy, who wanted to put a deer that had been hit by a car out of its misery Wednesday morning, fired 17 shots into its stomach before the animal finally died…. [Into its stomach?!]

> Lt. Steve Maynard said: “The deputy didnâ€™t know where to shoot it. [Seriously?] He calls the sergeant, and the sergeant says to shoot it right behind the shoulder, which is the location of the heart.” Instead, the deputy shot the deer in the stomach.

> Maynard said the deputy was â€œhorrifiedâ€ by the incident. “Heâ€™s very upset about it, and we asked for a victim advocate to talk to him.”

> As a result of the incident, patrol staff now will receive training on how to quickly kill an animal that is critically injured.

Let’s recap: The deer is just about dead. A sheriff’s deputy, who presumably has had ample firearms training including info about kill zones and anatomy, a) has no idea where to shoot it, and b) thinks the stomach is behind the shoulder. Just like every mammal!

He proceeds to empty 17 rounds into it, presumably in front of other folks, and the poor animal finally expires, killed by this guy’s stupidity more than the bullets. Then this allegedly “highly trained” professional is so traumatized by his own ineptitude he needs counseling.

Now the entire sheriff’s department is getting training on how to kill things. Gainesville residents, buy a firearm! Protect yourselves!

That’s why this is on BassParade. We can’t make this stuff up.

Do You Dream About the FLW Cup?
Bucketmouth U: Where Brains Meet Bass
To Top
We use cookies to ensure that we give you the best experience on our website. If you continue to use this site we will assume that you are happy with it. Cookie settingsACCEPT
Privacy & Cookies Policy